In an hour-long phone call, President Trump pressured Georgia’s Republican Secretary of State Brad Raffensperger to “find” enough votes to overturn Joe Biden’s victory in the state’s 2020 election. He made the call nearly two weeks before he is due to leave office and just two days before the runoff elections in Georgia that will determine control of the Senate. The Washington Post obtained a recording of the phone call of Trump both berating and begging Raffensperger, and even threatening him with criminal charges if he refused to investigate false claims of voter fraud and change the certified election results. “It’s astounding,” says Nsé Ufot, CEO of New Georgia Project and New Georgia Project Action Fund, organizations that played a key role in mobilizing voters for the 2020 election, and again for Tuesday’s runoff elections. “This has to be criminal.”

AMY GOODMAN: This is Democracy Now!, democracynow.org, The Quarantine Report. I’m Amy Goodman, as we look now at President Trump’s extraordinary hour-long phone call to pressure Georgia’s Republican secretary of state, Brad Raffensperger, to “find” enough votes to overturn Joe Biden’s victory in the Georgia’s 2020 election. Trump made the call Saturday, nearly two weeks before he’s due to leave office and just days before Tuesday’s runoff elections in Georgia that will determine the control of the U.S. Senate.

The Washington Post released audio of the call Sunday, after Trump tweeted he had spoken to Raffensperger and claimed he was, quote, “unwilling, or unable, to answer questions” about allegations of voter fraud. Raffensperger tweeted in response, quote, “Respectfully, President Trump: What you’re saying is not true.”

The Washington Post obtained the recording of the call in which Trump both berates and begs Raffensperger, and even threatens him with criminal charges if he refuses to pursue the false claims and change the certified election results. During the call, Trump also said he could tell he had won Georgia based on rally size, the sizes of his rallies in Georgia. This is part of the exchange.

PRESIDENT DONALD TRUMP: We have won this election in Georgia, based on all of this. And there’s nothing wrong with — with saying that, Brad. You know, I mean, having — having a correct — the people of Georgia are angry. And these numbers are going to be repeated on Monday night, along with others that we’re going to have by that time, which are much more substantial even. And the people of Georgia are angry. The people of the country are angry. And there’s nothing wrong with saying that, you know, that you’ve recalculated.

SECRETARY OF STATE BRAD RAFFENSPERGER: Well, Mr. President, the challenge that you have is the data you have is wrong.

PRESIDENT DONALD TRUMP: It’s more illegal for you than it is for them, because you know what they did and you’re not reporting it. That’s a — you know, that’s a criminal — that’s a criminal offense. And, you know, you can’t let that happen. That’s — that’s a big risk to you and to Ryan, your lawyer. That’s a big risk. I just want to find 11,780 votes, which is one more than we have, because we won the state.

Trump plans to address Georgia voters this evening at a rally in the conservative stronghold of Dalton, represented by the newly elected QAnon-supporting congresswoman, Marjorie Taylor Greene. Senator Perdue is in quarantine and campaigning virtually, after he said he was exposed to a staffer who tested positive for COVID.

Meanwhile, President-elect Biden will campaign in Atlanta. Vice President-elect Kamala Harris hit the campaign trail in Savannah over the weekend to support Democratic Senate candidates Reverend Raphael Warnock, pastor of Ebenezer Baptist Church in Atlanta, where Dr. King grew up and preached, and Jon Ossoff. This is Ossoff responding to Trump’s phone call during a speech to supporters.

JON OSSOFF: At this moment, when the president of the United States calls up Georgia’s election officials and tries to intimidate them to change the result of the election, to disenfranchise Georgia voters, to disenfranchise Black voters in Georgia who delivered this state for Joe Biden and Kamala Harris, that is a direct attack on our democracy.

Nsé, welcome to Democracy Now! Can you first respond to this just astounding audiotape of the president threatening, beseeching, berating the Republican secretary of state of Georgia?

NSÉ UFOT: It’s astounding, Amy. And good morning. It’s unfortunate, though, that this appears to be a continuation of the sort of treatment that our secretary of state and our governor have been on the receiving end of since the November elections were called. I remember sort of experiencing a lot of pressure to congratulate him and to praise him for sort of refusing the president’s attempts — and, quite frankly, refusing the national Republican Party’s attempts — to engage in a criminal conspiracy to steal the elections. I don’t pretend to be a constitutional scholar, but I don’t know how this is unconstitutional. This has to be criminal.

AMY GOODMAN: I mean, you clearly are not a fan of Brian Kemp, who beat Stacey Abrams, one of your colleagues in the get-out-the-vote campaign that has just been astounding throughout Georgia, a model for the country, or the Republican secretary of state. You’ve had problems with issues of voter suppression. But what was your response to how Brad Raffensperger and his attorney, who was on the call, Ryan Germany — what did Trump say when he was talking to Ryan Germany? He said, “What’s wrong with you? I heard your lawyer is very difficult, actually, but I’m sure you’re a good lawyer. You have a nice last name.”

NSÉ UFOT: “Wow!” is my reaction. But, one, I mean, like, this is absurd. Under any other circumstances, again, this would be disqualifying. I think my concern — or, I think, one, the secretary of state’s office knew that they were recording the phone call, and so my response is, you know, they comported themselves, I guess, as if they knew that the phone call was being recorded, and they comported themselves as if they knew that they would eventually release it. Again, they are doing their jobs, barely, but in some areas they are still very much attacking our elections infrastructure or constructing barriers to participation that Georgia voters have to clear in order to exercise the franchise and participate in our elections. And so —

AMY GOODMAN: Which are what? What are those obstacles even still?

AMY GOODMAN: So, I want to go to President Trump specifically attacking your colleague, the former gubernatorial candidate, Stacey Abrams.

PRESIDENT DONALD TRUMP: And Stacey Abrams is laughing about — you know, she’s going around saying, “These guys are dumber than a rock.” What she’s done to this party is unbelievable, I tell you. And I only ran against her once, and that was with a guy named Brian Kemp. And I beat her. And if I didn’t run, Brian wouldn’t have had even a shot, either in the general or in the primary. He was dead, dead as a doornail. He never thought he had a shot at either one of them. What a schmuck I was.

AMY GOODMAN: So, there is Trump, doing what he feels so comfortable doing: attacking a powerful woman of color. But talk about what you, what Stacey Abrams, what all of these voter groups have done right now. Tomorrow is the election, even though millions have already voted, Nsé Ufot. What do you see is the hope for tomorrow?

NSÉ UFOT: Right. The hope for tomorrow is that Georgians will block out misinformation, disinformation, and show up at the polls in overwhelming numbers, so that we can neutralize all these voter suppression tactics that we see playing out in the state, that we can be reasonably assured that the will of the people is reflected in the results of our elections.

And as for leader Abrams, I think that her intervention has — she’s the architect of an ecosystem, right? So, that has exposed many of the deficiencies in Georgia’s sort of elections and democracy infrastructure and has helped start and launch organizations and has invested in leaders, that has helped us register almost a million Georgians of color in all 159 of Georgia’s counties. We have historic levels of turnout. I remember in the aftermath of the November general election, there was so much handwringing about the structural advantage that the Republicans have in a runoff election because their base is older and whiter. “And don’t you know that historic turnout is 30%, 40%, so we shouldn’t even bother?”

Quite frankly, this will be the most expensive Senate races, the most expensive congressional races, in the history of American politics. And the enemies of progress have always had more money. But what we have is people power. And we’re absolutely — we’ve seen that during the early voting period with over 3 million Georgians voting already, over 1 million of them being Black Georgians. We’ve seen historic youth participation, historic youth turnout. And I think that we will see elevated turnout again on Tuesday, tomorrow.

AMY GOODMAN: What did your helping to prep your mom — you moved from Nigeria to Georgia — for her citizenship test teach you about citizenship, as we wrap up, Nsé?

NSÉ UFOT: OK. Well, my mother and I became citizens together. And so, while she worked a second job to hire an immigration attorney, it was my responsibility to make sure that we passed the citizenship exam.

I pledged an allegiance to this country, to the Constitution. I pledged to defend it against all enemies, foreign and domestic. And we are witnessing a domestic attack on our country, on our Constitution, on our way of life. And I encourage all Georgians, and all the people under the sound of my voice, to join us in not only electing champions, people who will co-govern with the people —

NSÉ UFOT: Yes. And so, go out and vote tomorrow. 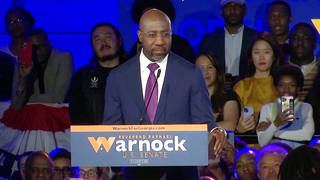