Israel has administered COVID-19 vaccines faster than any country in the world, with more than 14% of Israelis receiving vaccines so far. Despite the fast rollout, human rights groups are expressing alarm over Israel’s decision not to vaccinate Palestinians in the occupied West Bank and Gaza, where about 1,500 people have died during the pandemic. Israel has defended its actions citing the Oslo Peace Accords, which put Palestinian authorities in charge of healthcare in the West Bank and Gaza. Palestinian officials are facing a number of hurdles in launching their own vaccine campaign, including a shortage of money, lack of access to vaccines and lack of infrastructure to distribute a vaccine. “Israel actually is violating international law because it is denying its responsibility as an occupying power,” says Dr. Mustafa Barghouti, a physician, member of the Palestinian Parliament and head of the Palestinian Medical Relief Society. “Israelis are getting the vaccines, and Palestinians are getting nothing.”

Israel has become the first country in the world to administer COVID-19 vaccines to more than 10% of its population. As of Monday, 14% of Israelis had received a vaccine — far higher than any other country. Despite the fast rollout, Israel’s health minister says a total lockdown is needed to combat the surging number of new infections.

This comes as human rights groups are expressing alarm over Israel’s decision not to vaccinate Palestinians living in the occupied West Bank and Gaza, where about 1,500 people have died during the pandemic. Physicians for Human Rights recently said, quote, “Israel bears moral and humanitarian responsibility for vaccinating the Palestinian population under its control,” unquote. Israel is, however, offering vaccines to Jewish settlers living in the illegal settlements in the West Bank.

Israel has defended its actions, citing the Oslo Peace Accords, which put Palestinian authorities in charge of healthcare in the West Bank and Gaza. Palestinian officials are facing a number of hurdles in launching its own vaccine campaign, including a shortage of money, lack of access to vaccines, lack of infrastructure to distribute a vaccine. Israel has so far been relying on the Pfizer-BioNTech vaccine, which needs to be stored at minus-94 degrees Fahrenheit. Storing such a vaccine is impossible in Gaza, where residents often go 12 or more hours a day without electricity. In 2014, Israel bombed Gaza’s only power plant in what Amnesty International described as “collective punishment” of Palestinians.

We welcome you to Democracy Now!, Dr. Barghouti. Can you explain what is happening? How has Israel become the country that has vaccinated more of its population than any country in the world, and yet Palestinians are not getting vaccinated? Who’s in charge of this program? Who should be?

DR. MUSTAFA BARGHOUTI: Well, thank you, Amy. I’m glad to be with you.

Israel actually is violating international law, because it is denying its responsibility as an occupying power. Israel managed to get 14 million vaccines for the Israelis and those who hold Israeli IDs, but gave nothing to Palestinians. So, practically, they are vaccinating 8 million Israelis and not vaccinating 5.3, 5.2 million Palestinians living in the Occupied Territories.

More than that, this system of racial discrimination, which can only be compared, in my opinion, to apartheid system, is doing something horrible in the West Bank. Seven hundred fifty thousand illegal settlers, as you said, are getting the vaccines now; 3.1 million Palestinians in the West Bank are getting nothing. More than that, in the Israeli prisons, Israel ordered the guards in the prisons to get the vaccine, and probably the Israeli criminal prisoners, but the Palestinian prisoners, 5,000 of them, are getting nothing. What can be more clear here than that this confirms that this is really a system of racial discrimination?

And the biggest disaster is in Gaza, because in Gaza you have 2.1 million besieged by Israel, lacking health facilities, lacking equipment, and there, they are not getting any vaccines. And more than that, 70% of them are refugees displaced from their land in 1948. When you tell them, “Go and quarantine,” I don’t know how they can do that, if you have 10 people living in two rooms. It’s impossible.

The problem is that the rate of infection today in the West Bank and Gaza is 36%, while in Israel it’s 4.5%. Israelis are getting the vaccines, and Palestinians are getting nothing.

JUAN GONZÁLEZ: But, Dr. Barghouti, isn’t it in the interest of Israel, from a public health perspective, even if they want to pursue this continued antagonistic policy toward the Palestinians, to have the Palestinians vaccinated, to reach herd immunity in the total area?

In reality, what his government is doing is actually hurting the Israelis, as well, because you cannot reach herd community if you have 8 million people vaccinated and 5.2 million people not vaccinated, especially that 130,000 workers will continue to go to Israel for work and will interact with Israelis, of course, and there are 750,000 other Israelis, illegal settlers, in the West Bank, who will continue to commute and communicate with the 3.1 million unvaccinated Palestinians. So, practically, this is a crime against Palestinians and a crime against the health of Israelis. It’s a violation of the international law, but also it’s, in my opinion, the worst crime against medical ethics, which says nobody should be discriminated against because of anything, which says, “Do no harm, and help people as much as you can as a health professional.”

JUAN GONZÁLEZ: I wanted to ask you — the COVAX facility that the World Health Organization established to help poor countries has pledged to vaccinate 20% of Palestinians. Where does that stand right now in terms of that pledge?

DR. MUSTAFA BARGHOUTI: I am in communication with the head of WHO here. And they are trying their best, but they do not think they can get anything here before four or five months, and if they are lucky. Up 'til now, they don't know what vaccine they can get in. Up 'til now, they don't know how to get vaccines. That’s why, given the huge spread now of community infections in the West Bank and Gaza, a very high number of cases — I estimate we have already 600,000 cases. And they approached the Israelis. The WHO approached Israel, asking at least for vaccines for the health professionals. Israel refused and continues to refuse.

So, unfortunately, we are looking here at a potential real serious disaster. And as a person who is suffering from COVID-19 now, after nine months of being so protective and trying to be very careful, I can tell you this is a horrible disease. I don’t wish it for anybody. It’s very dangerous. It can be destructive. It can kill the people. And it can also leave them with incapacity for a very long — for the rest of their life.

AMY GOODMAN: So, Dr. Mustafa Barghouti, as you said, you yourself have COVID-19 right now. You’re in the throes of it. We know that Saeb Erekat, chief negotiator, died of COVID-19. You’re a frontline physician. Do you get vaccinated? And what about the vaccines? Apparently, PA has asked the United Arab Emirates to share some of its supply of Chinese-made vaccine, and the Palestinian Authority has reportedly ordered 4 million doses of the Russian Sputnik vaccine. When are these doses going to come? And what are you demanding of the not only Israeli government, but the U.S. government, since it gives so much money to the Israeli government?

I was not vaccinated. No health professional in the West Bank has been vaccinated yet. And we don’t know when we will get this vaccine. And it is really critical, because the rate of infection is going up, and it is affecting — it could affect everybody in the community. So what we need is immediate pressure.

Regarding the Russian vaccine, yes,, there was a request, but I don’t think the Russians can provide such vaccines, because their capacity of production is still low. They have produced only 500,000, up 'til now, vaccines. And their maximum capacity is 4 to 5 million per month, and they need 100 million vaccines for Russia itself. So I don't think that is a solution, although the Sputnik vaccine seems to be very good.

I think what we need is to really have a way of getting the AstraZeneca or the Moderna vaccine. Of course, we have a problem with Pfizer, although we have managed to provide some facilities in the West Bank, if we can get it, to give it to people.

But the most immediate need now — now it’s a health disaster. Now it’s a very risky situation. A whole population is subjected to a very big, alarming risk. That’s why it is very urgent to immediately exercise pressure so that Palestinians also get the vaccines.

AMY GOODMAN: Would you describe this as medical apartheid?

DR. MUSTAFA BARGHOUTI: Yes, absolutely. This is the worst form of apartheid: medical apartheid. It didn’t even exist in South Africa. This is just beyond description. Imagine you go to a prison: You vaccinate the guards, but not the prisoners; you vaccinate Israeli prisoners, who are criminal usually, and not vaccinate Palestinian political prisoners. Imagine you go in the cities of the West Bank: The settlers are vaccinated, and nearby Palestinian cities and communities are not vaccinated. Not only they grab our land, not only they settle illegally on our land, take away our natural resources, take away our —

DR. MUSTAFA BARGHOUTI: — sources of economy, but also they back this system of apartheid. I call it — I call it vaccination with racism.

AMY GOODMAN: Dr. Mustafa Barghouti, physician, member of the Palestinian Parliament, thanks for joining us. 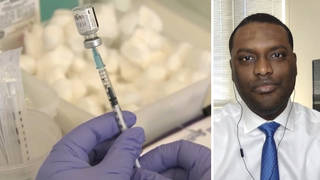