Democrats appear on the brink of taking control of the U.S. Senate after the Rev. Raphael Warnock won a special election Tuesday over Republican Senator Kelly Loeffler, while Democrat Jon Ossoff has a 16,000-vote lead in his runoff against former Republican Senator David Perdue. Warnock is pastor of the Ebenezer Baptist Church in Atlanta, which was the spiritual home of Dr. Martin Luther King Jr. He will become the first Black Democrat to ever represent a Southern state, as well as the first Black senator from Georgia. He spoke to supporters last night.

Sen.-elect Rev. Raphael Warnock: “We were told that we couldn’t win this election, but tonight we proved that with hope, hard work and the people by our side, anything is possible.” 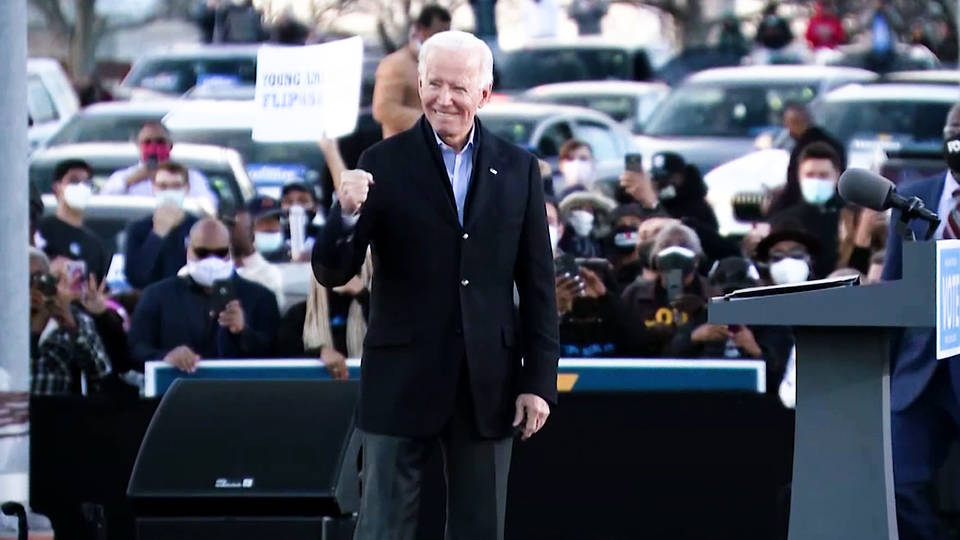 A joint session of Congress is convening today to certify the Electoral College votes. President Trump falsely claimed Tuesday Vice President Mike Pence has the power to unilaterally reject electoral votes. At least 11 Senate Republicans and over 100 House Republicans have vowed to vote against certifying Joe Biden’s win. A small group of senators, including Ted Cruz and Kelly Loeffler, who just lost her election to Democrat Raphael Warnock, are expected to contest the results in up to six states, which would force lawmakers to debate the objection and then take a vote on it, delaying proceedings.

As all this unfolds on Capitol Hill, Trump is planning to address his supporters at a “Save America” rally near the White House. Pro-Trump protesters clashed with police Tuesday evening near Black Lives Matter Plaza, and Mayor Muriel Bowser has called in the National Guard ahead of today’s protests. The U.S. recorded its highest daily pandemic death toll Tuesday as 3,775 people succumbed to COVID-19. Hospitalizations also reached a new high, while the number of confirmed COVID cases topped 21 million. States are calling in National Guard members and training additional volunteers as part of new efforts to speed up the rate of vaccinations. 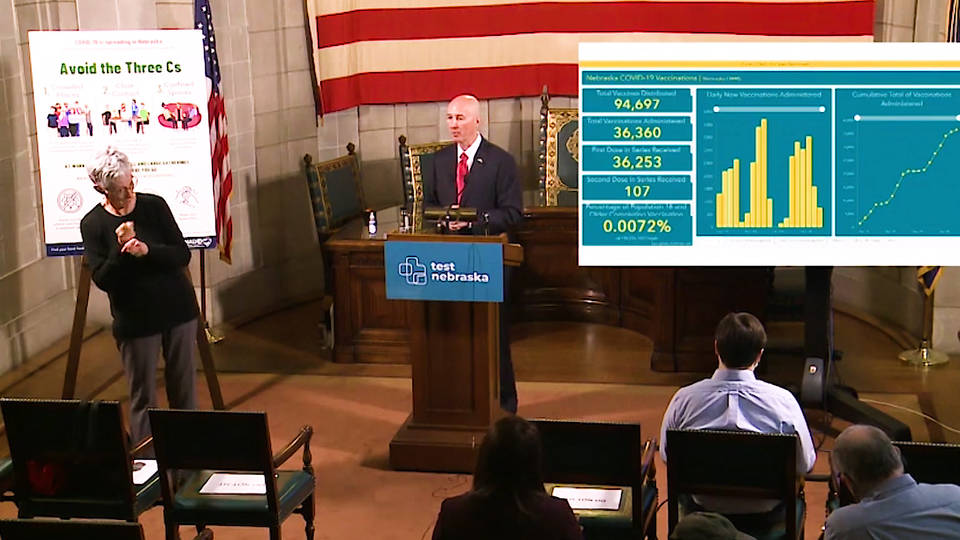 In Nebraska, Governor Pete Ricketts has come under fire after saying undocumented workers at meatpacking plants will not be eligible to receive the coronavirus vaccine.

Gov. Pete Ricketts: “You’re supposed to be a legal resident of the country to be able to be working in those plants, so I do not expect that illegal immigrants will be part of the vaccine with that program.”

Workers in meatpacking plants have suffered some of the nation’s worst outbreaks. An estimated 14% or more of Nebraska’s meatpacking workers are undocumented.

Up to 1 in 50 U.K. Residents Likely Have the Coronavirus In Britain, officials are ramping up their vaccine drive as new estimates show as many as one in 50 people in the U.K. have COVID-19, with that number reaching one in 30 in London. Britain is now in its third lockdown in an effort to stem the rapid spread of the new coronavirus variant. In other news from the U.K., the judge ruling over Julian Assange’s extradition case has just denied him bail. This comes two days after the judge rejected a U.S. bid for his extradition, where he could have faced up to 175 years in prison. The WikiLeaks founder must stay in prison while the U.S. appeals this week’s decision.

Officials Will Not Charge White Officer Who Shot Jacob Blake in Back, Leaving Him Paralyzed In Wisconsin, Kenosha County District Attorney Michael Graveley has announced no charges will be filed against the white police officer who shot Jacob Blake seven times in August, leaving the 29-year-old Black man partially paralyzed. The officer, Rusten Sheskey, fired the shots at point-blank range into Blake’s back as he leaned into his car. Inside the car were Blake’s three boys, aged 3, 5 and 8. The shooting sparked major protests against racism and police brutality in Kenosha. B’Ivory LaMarr, an attorney for the Blake family, criticized the decision.

B’Ivory LaMarr: “It is very discouraging for all the protesters and all the individuals who gathered peacefully to urge change. And it just shows that we have a lot of work to do. We won’t stop, and it doesn’t stop here. … There’s three — three — justice systems in America. There’s one for Black and Brown people, one for police officers and one for the rest of America.”

We’ll have more on the case later in the show. Iran has issued a request for Interpol to arrest President Trump and 47 other American officials over the assassination of top general Qassem Soleimani just over one year ago. In June, Interpol rejected a similar arrest request from Iran. This comes amid mounting tension between the two nations in the final weeks of Trump’s presidency as some fear he may be gearing up for a military attack on Iran.

Meanwhile, South Korea is sending a delegation to Iran after Revolutionary Guard officers seized one of its tankers. Iran said the South Korean vessel was violating environmental protocols. Tehran has been pressuring Seoul to release some $7 billion in oil revenues that have remained frozen in South Korean banks due to harsh U.S.-led sanctions. 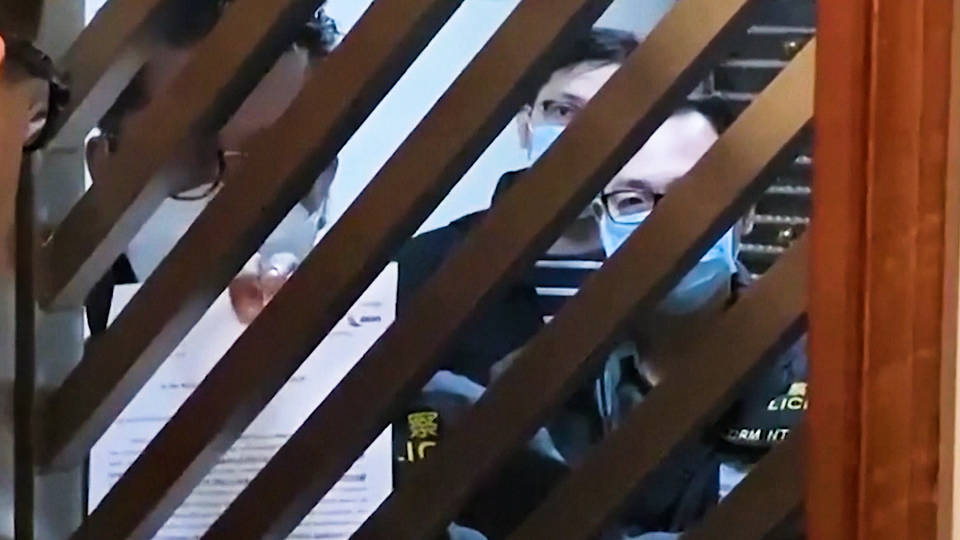 In Hong Kong, authorities raided and arrested over 50 politicians and activists in a massive early-morning sweep as the crackdown on pro-democracy voices intensifies. The group is being held under the highly contested national security law, reportedly for organizing a primary vote last year to select candidates for a legislative election in the hopes of forming a majority bloc of pro-democracy lawmakers. Qatar has reestablished diplomatic relations with Saudi Arabia, Bahrain, the United Arab Emirates and Egypt, three years after the four countries imposed an embargo against Qatar and accused it of becoming too close to Iran. The agreement to restore ties was signed Tuesday at the Gulf Cooperation Council annual summit in Saudi Arabia. Back in the U.S., the Environmental Protection Agency finalized a rule which experts say will allow companies to further pollute the nation’s air and water by limiting what research can be included in crafting public health protections. Known as the “transparency” rule, it requires researchers to disclose their raw data, which is often not possible since it can include confidential medical records and other personal data, excluding vital findings from the development of environmental regulations.

Meanwhile, the Trump administration has just weakened protections for over 1,000 species of birds. The Interior Department rule bars officials from charging companies for killing migratory birds in any “unintentional” act, such as oil spills or toxic waste ponds. Wildlife experts have warned the rule could lead to billions more birds dying over the coming decades.

A top official from Joe Biden’s team vowed the recent policies would be reversed, though it’s unclear how long that will take. In more environmental news, the first-ever oil and gas lease sale for the Arctic National Wildlife Refuge is set to proceed today after a federal judge sided with the Trump administration in its bid to allow corporations to exploit one of the world’s last pristine wilderness areas. Joe Biden has pledged to permanently protect the region, which is extremely rich in biodiversity and has been home to Indigenous peoples for many generations.

DOJ Seeks to Roll Back Protections Against Civil Rights Discrimination 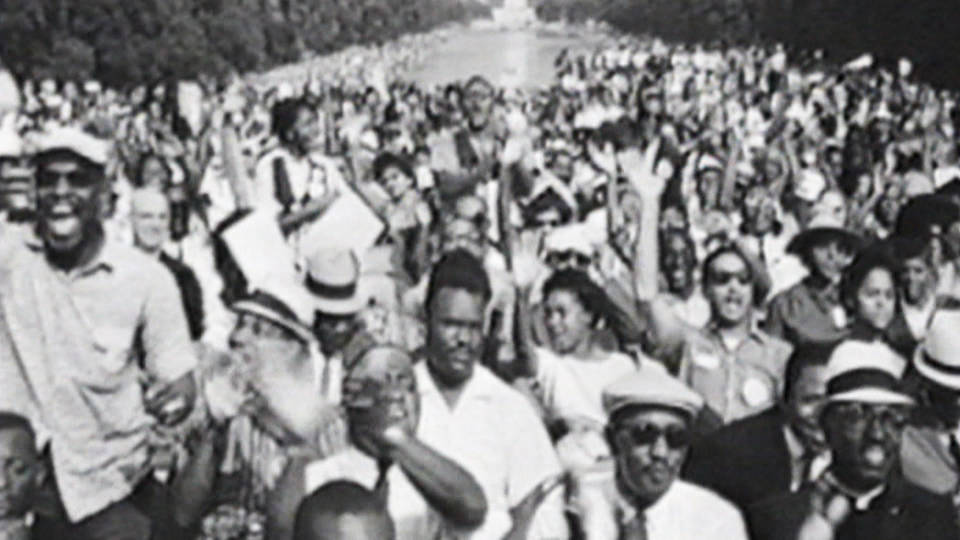 The Justice Department is seeking to undo long-standing protections against discrimination in the waning days of the Trump administration. The proposed change to the Civil Rights Act affects a provision barring recipients of federal funding from discriminating based on race, color or national origin. The move would mean employers, housing programs, schools and hospitals could enact policies or practices that “disparately impact” minority groups, as long as intentional discrimination cannot be proven. In a chaotic scene Tuesday, Pennsylvania Republican state senators refused to seat their Democratic colleague, Senator Jim Brewster, who won reelection in November. Brewster’s win has been certified, but Republicans say they will not seat him while a legal challenge to his victory plays out in court. Republicans also took the extraordinary step of removing Democratic Lieutenant Governor John Fetterman from presiding over the session after he insisted on swearing in Brewster. In New Jersey, 140 immigrant prisoners are now on hunger strike across the Essex County and the Hudson County jails. Hunger strikers are demanding ICE — that’s Immigration and Customs Enforcement — release them so that they can reunite with their families and be in a safe place amid the COVID-19 surge while they fight their immigration cases. Prisoners reported intimidation and threats from guards.

Activists Demand Joe Biden Cancel Student Debt: “We Will No Longer Be Shackled” In Philadelphia, activists held a protest outside Joe Biden’s local headquarters Monday to demand he cancel student debt when he takes office. Some 45 million people in the U.S. now owe a total of about $1.6 trillion in student loans. This is Lauren Horner, an organizer with the Pennsylvania Debt Collective.

Lauren Horner: “We will no longer be shackled by the debt. We’re not at fault for the debt. It’s this racist capitalist structure that is controlling us. It is feeding off our minds and bodies and spirits, and we’re not taking it any longer. The moment that Black and Brown communities decided they wanted to get an education, tuition rose and loans were forced upon us. Our communities are hurting the most.”