We go to the picket line in Iowa, where thousands of workers are on strike at John Deere after the United Auto Workers failed to reach an agreement with the company to improve wages. Despite reporting record profits in 2021, John Deere forced employees to work overtime and announced significant cuts to raises and benefits. Chris Laursen, 19-year John Deere worker on strike in Ottumwa, Iowa, says profit margins went to shareholders and a 160% salary increase for the CEO. “We came into work every day. We worked overtime, not only exposing ourselves, but our family, our friends,” says Laursen. “At the end of the day, we feel that the offer brought up is very arrogant and … is not going to cut it.”

As we continue our look at the strike wave in the United States, we turn to the strike underway by more than 10,000 John Deere workers at 14 plants, including seven in Iowa, four in Illinois, one each in Kansas, Colorado and Georgia. Today marks the seventh day of the strike, and negotiations resume Monday. Workers who are manning picket lines at the John Deere plant in Des Moines, Iowa, will get a visit today from U.S. secretary of agriculture and former Iowa governor, Tom Vilsack, according to the United Auto Workers Local 450.

For more on what workers are demanding, we go to Ottumwa, Iowa, to speak with Chris Laursen, who has been out on the picket line. He’s a painter at the Ottumwa Works factory there at John Deere and has worked for John Deere for close to two decades. He’s a former president and member of United Auto Workers Local 74.

Chris, welcome to Democracy Now! Explain what the demands are. We’re also with Alex Press, who writes extensively about strikes and workers across the country.

Basically, what we’re wanting — we’ve seen a tentative agreement that we had a ratification vote on October 4th. We’ve seen a very paltry wage increase. We’ve seen no improvements to our incentive plan, no language to address any of the failings there. And really, the big nonstarter for a lot of people was the fact that any new hires coming in after the 1st of November of this year would not be entitled to a secure defined pension, but rather a 401(k) pension — or, 401(k) match. And a lot of us are not willing to invest our retirement benefits, for the kids coming in, the kids down the street, on a Wall Street speculation portfolio.

It might be important to note also that Deere is in the wake of record profits. They’re projected to make between $5.7 and $5.9 billion this year. They just rewarded their CEO with a 160% wage or salary increase. They gave their investors a 17% quarterly dividend hike back in August. And for a worker like me, over this next six years, right out of the gate, I make about 20 bucks an hour, and it’s going to be about a dollar wage increase for me, followed up, about the end of those six years, about $2. What we’re asking for is a fair shake and something equitable. We don’t — I’d like to quote Walter Reuther here: We don’t want a bigger slice of pie; we want a bigger pie. They need to come in with a bigger bucket of money. And let’s negotiate.

JUAN GONZÁLEZ: And, Chris, you mentioned the record profits at Deere. How has it been able — how has the company been able to achieve the profitability in the midst of the pandemic and the sharp downturn that occurred in the economy last year as a result of the shutdown?

CHRIS LAURSEN: You know, that’s a great question. You know, for Deere workers, I mean, there was no shutdown. There was no lockdown during the pandemic. We came into work every day. We worked overtime, not only exposing ourselves, but our families, our friends. And at the end of the day, the offer that was brought up, you know, we feel that it’s very arrogant, audacious and classist. And, you know, it’s not going to cut it. That’s why we sent a direct clear message to Deere, when nine of 10 workers voted to send them back to the negotiating table.

JUAN GONZÁLEZ: And you have been — there are generations of your family that have been at Deere. Could you talk about the importance of a company like Deere to the labor movement in the country, in general?

CHRIS LAURSEN: Yeah. So, I mean, here at John Deere Ottumwa Works, as well as many other places in John Deere — Waterloo, you know, Ankeny, the Quad Cities especially — you have generations that have worked there, families that are very invested in this company. You have grandparents, parents, you know, children. If you walk down on the picket line, you will see families. You know, it’s a family event. People have come down to support. And I’ll tell you, the amount of support we’ve got from our community has just been amazing and overwhelming, so many donations from businesses, so many donations just from people on the street that will come and walk our picket line. You’ll see cars driving by, waving, honking in solidarity. So, we’re really impressed and very thankful from the outpouring of support from the community.

AMY GOODMAN: And, Chris, can you talk about the significance of the U.S. agriculture secretary, Vilsack, former governor of your state, of Iowa, coming to stand on the picket line, and then how the company is responding?

CHRIS LAURSEN: Well, I can’t speak to how the company is going to respond, but we certainly appreciate Mr. Vilsack coming to Iowa, walking our picket line with us. We’ve seen a large number of, you know, politicians and people in the Legislature come to walk the picket line and show their support. So, yeah, we’re very grateful Mr. Vilsack is coming down and walking with us.

AMY GOODMAN: Well, we want to thank you, Chris Laursen, for joining us, painter at John Deere Ottumwa Works factory in Iowa, a member of UAW Local 74, former head of the local, as we turn to New York. But before we do, to talk about the taxi workers, Alex Press, can you put the John Deere strike in context, for example, with a few of the other strikes that are going on right now, like Kellogg’s?

ALEX PRESS: Yeah, sure. So, I think one important thing is that these are all private-sector strikes. That’s where the uptick is happening in the United States, which is very unusual. The private sector has far lower unionization rates than the public sector. Public-sector workers right now are largely focused on negotiating safe return to work, things like that, so they haven’t been striking as much. So the fact that private-sector workers, who traditionally, historically have lower strike rates in recent years, are a strike is important, also the fact that these are different sectors, different parts of the — different industries within the economy. You know, we have food manufacturing; we have John Deere, obviously, is a separate industry; healthcare workers; IATSE, obviously, also another different industry. So this reflects a real broad willingness to fight.

I think also what’s important here is what Chris mentioned, which is that the company wanted to create a two-tier contract on pensions. They said new hires are going to have a worse deal. And workers know that that is going to weaken their own union. It’s not just about protecting future workers, but it’s going to protect them, too, to refuse that kind of deal. And that’s what we’re seeing, is that companies think we’re in an old moment. They think workers are willing to put up with whatever they’re given. And workers know that the moment has changed, that the pandemic, that decades of stagnant wages and nothing left to lose has made them willing more and more to fight back. So, that is the picture of what’s going on and why this could keep spreading. 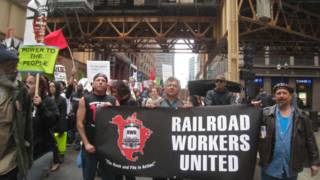