The United States Navy is facing growing calls to permanently shut down one of their fuel storage facilities in Hawaii after a petroleum leak contaminated the water supply that serves over 90,000 families around the naval base of Pearl Harbor on the island of Oahu. The storage site, called the Red Hill Bulk Fuel Storage Facility, has long been protested by environmental activists in part because of its location just 100 feet above the primary groundwater aquifer for Honolulu and the rest of Oahu. We speak with two Native Hawaiian guests: civil rights lawyer Camille Kalama and Kamanamaikalani Beamer, a former commissioner of the Hawaii Commission on Water Resource Management. “This is the most critical threat that we’ve ever had to our groundwater resources,” says Beamer. “The Navy assured us and promised our state Water Resource Management Commission that this would never happen, and yet here we are.”

AMY GOODMAN: This is Democracy Now!, democracynow.org. I’m Amy Goodman, with Juan González, as we turn now to Hawaii, where the U.S. Navy is facing growing calls to permanently shut down a massive underground fuel storage facility that’s contaminated water supplies in parts of the island of Oahu.

State health officials recently found petroleum levels 350 times the safe limit in a water system that serves over 90,000 Navy families. The Red Hill Bulk Fuel Storage Facility has been used since the '40s to provide fuel to Pearl Harbor. It can hold up to 250 million gallons of fuel. Environmental activists have long called for the Red Hill site to be closed down, in part because it's located just a hundred feet above the primary groundwater aquifer for Honolulu and the rest of Oahu.

On Monday, the Navy defended its response to the crisis during a 13-hour public hearing. The Navy refused calls to temporarily remove fuel from the tanks, saying the facility, quote, “provides a large preponderance of the war reserve fuel supply for the Indo-Pacific theater.”

Environmental activists and Native Hawaiians have held a number of protests in recent weeks over the water crisis.

SAM IKEHARA: How many more leaks and reports of burning skin will it take? How many more children need to experience headaches, vomiting and diarrhea before the tanks are shut down? There has already been too much harm, too much damage, not enough accountability and not enough healing. Two hundred thousand gallons of fuel cannot be unspilled. The skin cannot be unburned. But it is not too late to do the right thing and shut down Red Hill before an even greater catastrophe is upon us.

AMY GOODMAN: We’re joined now by two guests in Hawaii. Camille Kalama is a Native Hawaiian civil rights lawyer. She’s executive director of Koʻihonua. Kamana Beamer is a professor at University of Hawaiʻi at Mānoa. He previously served as a commissioner on the Hawaii state Water Resource Management Commission.

Camille, let’s begin with you. So, we’re talking about the U.S. naval base at Pearl Harbor. Explain exactly what’s at stake. Wow, a 13-hour hearing.

CAMILLE KALAMA: That’s right, Amy. Thank you so much for having us on here.

What’s at stake really is the future of the drinking water supply for the island of Oahu. For those that aren’t from here, Oahu is the most populated island in Hawaii. So, all the things you think about — Waikiki, Diamond Head, you know, a lot of the places that people come to visit — are here on this island. And what’s at stake is the possibility of petroleum getting into our drinking supply and that we won’t be able to get it out.

JUAN GONZÁLEZ: And, Camille, I wanted to ask you: Could you talk about what some of the contaminants of this fuel, that’s apparently already leaked into some of the water for the residents of the base itself — what are some of these contaminants and what the impacts have been?

CAMILLE KALAMA: Yeah. So, there are two types of fuel that were identified. They are jet fuel and — like a type of diesel and a type of gasoline. And they have made its way into the Army’s water system — or, sorry, the Navy’s water system, that serves both Navy and Army housing, for the most part, as well as several elementary schools. And so, there’s been multiple tests done, but these substances have caused different reactions in people, from nausea and vomiting to headaches to skin irritations and hospitalizations of people.

AMY GOODMAN: Let me bring Dr. Kamana Beamer into the conversation, professor at University of Hawaiʻi, previously served as commissioner on the Hawaii state Water Resource Management Commission for over eight years. How long has this been going on? What’s the Navy saying? And what’s your answer to them?

KAMANAMAIKALANI BEAMER: You know, in truth, these tanks have been leaking since they were built in the 1940s. But in recent history, in 2014, there was a spill of 27,000 gallons, that really caused all hands on deck and, you know, brought our islands into the midst of this conversation and crisis.

What’s terrible is that this moment today was completely avoidable. We knew about the potential threat since 2014. The Navy assured us and promised our state Water Resource Management Commission that this would never happen. And yet here we are.

JUAN GONZÁLEZ: And I’d like to go back to Camille for a second to talk about the influence and power of the Navy and the military in Hawaii. Clearly, Hawaii functions — has functioned for the Pacific region of the U.S. very much as Puerto Rico did for so many years for the Atlantic and the Caribbean as a major military bastion. Now, there was a movement 20 years ago to stop military bombing on the island of Vieques. There was a similar movement in Hawaii. If you could talk about that? But yet the military has held on to most of its bases in Hawaii in a way that it did not in Puerto Rico. For the most part, most of the military installations in Puerto Rico have been removed.

CAMILLE KALAMA: That’s right. There was a movement that started in the 1970s on Kahoʻolawe. And that island has been returned to the state of Hawaii in trust for the Hawaiian people. However, it is just minimally cleaned. In other words, it’s still contaminated. There is no freshwater resources on that island anymore.

And the Navy has continued to take land from Hawaii for more military training. So, for example, when the island of Kahoʻolawe was returned to the state, that was about 26,000 acres of land. At around the same time, the U.S. took almost 28,000 acres from the state, both on Oahu and the island of Hawaii, to expand its bases.

And it continues to engage in training, engage in military readiness here, and that is one of the purposes that the military claims this Red — this bulk fuel storage facility is necessary for their purposes, because it stores about 50% of the fuel for the Pacific region for the U.S. This USPACOM in the Pacific is the largest of the different commands, of the unified commands for the United States, and it covers the entire Pacific region. So, we are — we in Hawaii, we understand that we are in the middle of these different superpowers around the world and that we are this military outpost and continue to be used that way by the U.S. military.

AMY GOODMAN: Dr. Beamer, even just outside your house, you say you sometimes can feel the live fire testing. You’re calling for an end to that? And do you see this movement going in the same direction as the one in Puerto Rico?

KAMANAMAIKALANI BEAMER: Yes, it’s truthful. Anyone that lives here on Hawaii Island, especially in Waimea, in my hometown, feels their home shake when they bomb Pōhakuloa. It’s egregious. It hurts you deep in your soul, you know, as a Kānaka, as an Indigenous person to these islands, to feel our aina tremble and shake because of bombing and weapons of war and destruction.

This issue here on Red Hill is a serious threat to the future lives and any economy on Oahu and for all of Hawaii. This is the most critical threat that we’ve ever had to our groundwater resources. And in fact, this is a kind of terrorist act and threat the military is supposed to protect Hawaii from, and yet they’re the cause of it here on our islands. It’s terrible, it’s egregious, and it must stop. We must shut down the tanks immediately.

JUAN GONZÁLEZ: I wanted to ask also — Camille, you were part of the protests against the Thirty Meter Telescope on the summit of Mauna Kea. Could you talk about that, as well?

CAMILLE KALAMA: Yes. And many of our people were. Kamana was there, as well. It was, I would say, the largest uprising of our people in my generation, at least. I don’t know how much longer. But our people are educated. Our people are knowledgeable about what’s going on in our lands. And our commitment is really to the protection of this place, to our aina, to our land, and to our wai, to our water. And so, that was a struggle against the state of Hawaii, as well as a multibillion-dollar corporation, and that is backed by many countries. And we understand, as a people, that we don’t have military might. We don’t have, you know, firepower. But we do have a strength in that our people can come together in peace and nonviolence, and we will stand up, and we will stand for the protection of these places and of our resources.

AMY GOODMAN: Camille, we have to leave it there. I thank you so much, Camille Kalama, as well as professor Kamana Beamer. I’m Amy Goodman, with Juan González. Stay safe. 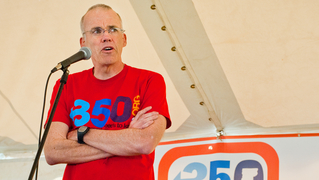