In a controversial move, the Biden administration has resumed and expanded the Trump-era “Remain in Mexico” policy that forces non-Mexican asylum seekers who arrive at the southern U.S. border to wait in Mexico while their cases are resolved in U.S. courts — a process that can take months or even years. We speak with Kennji Kizuka, associate director of research and analysis for refugee protection at Human Rights First, who documented how this puts asylum seekers in grave danger.

AMY GOODMAN: We’re going to move on right now. I’m Amy Goodman, with Juan González, as we look at this very controversial move of the Biden administration, which has resumed the Trump-era “Remain in Mexico” policy that forces non-Mexican asylum seekers who arrive at the southern U.S. border to wait in Mexico while their cases are resolved in U.S. courts — a process that can take months or even years. Human rights advocates who monitored the program’s first day under Biden on Monday said they already witnessed U.S. Border Patrol officers turn away several people who tried to request asylum. A group of former immigration judges released a statement condemning the return of the program as the, quote, “antithesis of fairness.”

Between 2019 and ’20, Trump officials used the Remain in Mexico policy to force nearly 70,000 asylum seekers to wait in parts of Mexico the U.S. government knows are extremely dangerous. A report by Human Rights First tracked more than 1,500 murders, kidnappings, rapes, tortures and other attacks on asylum seekers returned to Mexico under the policy.

This is an asylum seeker named Eduardo, who described how he was kidnapped and held for ransom after he was forced to wait in Mexico by the U.S. government.

EDUARDO: [translated] Well, we were 20, adults, children, women and their children, a pregnant girl who came with her child, laying on the ground. The poor girl cried and cried. We were all traumatized. They had us, and they said, “Whoever doesn’t pay us, we will kill you, or we will cut your fingers off one by one until your family finds a way to pay us.” I thought about my son and my wife who are waiting for me. I left Nicaragua to save my life, and I almost lost it here.

AMY GOODMAN: President Biden initially halted Trump’s Remain in Mexico program shortly after he took office, fulfilling a campaign promise. But he kept in place Trump’s Title 42 policy allowing the U.S. to continue mass expelling asylum seekers without due process, citing the pandemic as justification. This is Biden last December.

PRESIDENT-ELECT JOE BIDEN: It’s a matter of setting up the guard rails so we can move in the direction — I will accomplish what I said I would do: a much more humane policy based on family unification. But it requires getting a lot in place. It requires getting the funding to get it in place, including just asylum judges, for example. So, it’s a matter of — it will get done, and it will get done quickly, but it’s not going to be able to be done on day one.

PRESIDENT-ELECT JOE BIDEN: I say, “Trust me. Look at me.” I’ve never told them anything I haven’t done.

AMY GOODMAN: Now the Biden administration says it has no choice but to reinstate the Remain in Mexico program, formally known as MPP, or Migrant Protection Protocols, after a federal judge in Texas ordered the revival of the policy as part of a lawsuit brought by Texas and Missouri. But critics note Biden has not just restarted MPP, he has expanded it to include asylum seekers from the entire Western Hemisphere, including Haitians.

For more, we’re joined by Kennji Kizuka, associate director of research and analysis for refugee protection at Human Rights First.

Welcome to Democracy Now! So, the program, Kennji, just went into effect yesterday, the new Remain in Mexico program. Explain who is forced to stay in Mexico and the dangers that they face and what Biden can do about it.

That’s correct. The policy Remain in Mexico, which is officially called the Migrant Protection Protocols but of course has nothing to do with protecting migrants and has everything to do with deterring people who are seeking protection from even attempting to seek asylum in the United States, it was officially relaunched yesterday. And this morning, my colleagues are in Ciudad Juárez waiting for the first group of asylum seekers to be sent back to Mexico.

As you noted, in its original iteration, the Trump administration used Remain in Mexico to return non-Mexican asylum seekers who were from Spanish-speaking countries, and later also from Brazil. This new version that the Biden administration announced last week could return asylum seekers from anywhere in the Western Hemisphere. And, of course, we understand that that means that the Biden administration is considering returning Haitian asylum seekers, among others, to Mexico to wait there for their asylum proceedings in what were, quite honestly, farcical immigration court hearings, as you noted, from the immigration judges themselves.

And the work that my colleagues and I did over the past few years was largely to track what happened to the people who were returned under Remain in Mexico. And what we found were massive human rights violations and really a humanitarian catastrophe. As you noted, we tracked more than 1,500 cases of kidnappings, rapes, torture, and, unfortunately, two individuals, that we know of, lost their lives. A Salvadoran father, an asylum seeker, was stabbed to death in Tijuana, and a young man from Cuba, a 19-year-old, was shot to death in Ciudad Juárez just a few months ago.

JUAN GONZÁLEZ: And, Kennji, could you talk about the role of the Mexican government in this, whether, one, in terms of its reaction to the Remain in Mexico policy or in terms of its responsibility for providing some kind of security for these asylum seekers while they await some kind of adjudication of their applications?

KENNJI KIZUKA: The Mexican government is an integral part of the Remain in Mexico policy. It could not have been implemented the first time around, and it could not have been implemented in this version, without the agreement of Mexican officials to allow asylum seekers to be sent back to Mexico. And the Mexican government has made certain assurances to the Biden administration that, for instance, transportation and housing, security will be provided. But, frankly, the Mexican government doesn’t have the capacity or the will to ensure the safety of the people who are returned. Unfortunately, in the cases that we documented of people who were kidnapped, who were extorted, who were assaulted, Mexican officials — police, military, immigration officials — were often complicit in those attacks or at some points themselves directly causing them. So it doesn’t appear that the Biden administration can, through its cooperation, through its agreement with Mexico, guarantee the safety of the people who are returned.

And we’ve already heard from some border cities. The mayor of Tijuana, for example, has said that the city is just not prepared to receive any more asylum seekers, in part because so many are already waiting in these border cities because the Biden administration has continued to use Title 42 to block asylum requests at ports of entry, and that’s meant that many asylum seekers are waiting months and months for that initial opportunity to ask for asylum. So these shelters, they’re just inundated with people. They have no capacity to take in more asylum seekers. And frankly, the shelters themselves aren’t safe places, either. We’ve documented many instances in which kidnappings, attacks, rapes have happened inside shelters or just outside them. There just isn’t any way to safely or humanely implement this Remain in Mexico policy.

JUAN GONZÁLEZ: And what are we talking about in terms of the size of the populations now that are in these encampments or shelters on the Mexican side of the border?

KENNJI KIZUKA: You know, during the presidential campaign, Dr. Jill Biden visited the encampment that had grown up in the city of Matamoros across from Brownsville. And at that point, there were maybe 2,000 people in that camp. And I think it led the Biden campaign, now Vice President Harris, to really condemn Remain in Mexico, to say publicly that it was inhumane and commit to ending it. Unfortunately, the Biden administration’s policies, the use of Title 42 and now this Remain in Mexico restart, have generated themselves these kinds of informal encampments. So we see a massive camp in Tijuana, another one in Reynosa, where thousands of people are sleeping outdoors in terrible conditions, exposed to the dangers of being kidnapped or raped, assaulted.

We continue to track these instances. And actually, in the last year alone, even without Remain in Mexico, with just this Title 42 policy in place, we’ve been able to track more than 7,000 of these attacks against asylum seekers who are stranded in Mexico. And we don’t know how many people are going to be returned under Remain in Mexico this time around, but, as you noted, last time there were 70,000 people who were placed in the program, and they had to wait for months and months for their hearings. And this, again, created a major humanitarian disaster, because there were just so many people who were forced to remain in these dangerous places with really nowhere safe to go.

AMY GOODMAN: So, didn’t a federal judge instruct the Biden administration to stop using Title 42, yet they are continuing it? Also, we’re not talking about Mexicans here, right? They can’t stop Mexicans from coming in. These are non-Mexicans.

KENNJI KIZUKA: The Remain in Mexico policy only applies to non-Mexican migrants and asylum seekers, but the Title 42 policy applies to anyone from anywhere in the world. So, the Biden administration, like the Trump administration, has been expelling Mexicans, Central Americans, Haitians, people from many countries to Mexico and, in some cases, to the countries that they were fleeing directly, to Nicaragua, to Haiti, to El Salvador, to Guatemala.

AMY GOODMAN: Kennji Kizuka, I want to thank you for being with us, associate director of research and analysis for refugee protection at Human Rights First.

Coming up, we’ll look at how the nation’s first supervised drug injection sites have opened here in New York in a bid to fight the rise of overdose deaths. Stay with us. 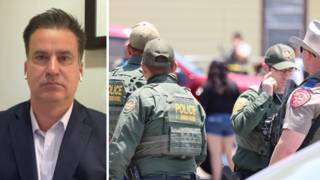