Incarcerated activist Kinetik Justice, whom Democracy Now! interviewed in 2016, was severely beaten last Saturday by guards at one of 12 Alabama prisons the Justice Department has sued for excessive use of force by staff. His mother describes his injuries.

StoryMay 13, 2016Alabama Prison Strike Organizer Speaks from Behind Bars: We Are Engaged in a Struggle for Our Lives

AMY GOODMAN: A warning to our audience: The next headline contains disturbing details and images.

The incarcerated activist Kinetik Justice, who Democracy Now! interviewed in 2016 during a nationwide prison strike, was severely beaten last Saturday by guards at the Donaldson Correctional Facility in Bessemer, Alabama. Witnesses say Justice tried to defuse an altercation after guards struck a mentally ill prisoner unconscious with an “ax-like” baton. Video shows pools of blood and a dislodged tooth in the cell. Both men were airlifted to a trauma center in Birmingham before being returned to prison Monday. Democracy Now! spoke to Kinetik Justice’s mother Ernestine Council after he was allowed to call her Wednesday and described his injuries.

ERNESTINE COUNCIL: He had stitches in his head, and his eye was swollen shut, where he had got hit, and that he had broke ribs, had two broke ribs, and bruises where they had beat him on the back of his head, his shoulder, his back and on his thigh. Those are the injuries that I know, that he told me that he had, and severe. They beat him badly. But thank God that he’s yet alive. He was in the hospital in a bed at that time when I first heard about it. He was in a holding cell. It wasn’t no bigger than a closet. And so, when he got up to do anything, [inaudible] that he couldn’t hardly walk.

AMY GOODMAN: In December, the Justice Department filed a major lawsuit against Alabama’s Department of Corrections for excessive use of force by staff in a dozen prisons, after an investigation detailed incidents such as a guard beating a handcuffed prisoner in a medical unit while shouting, quote, “I am the reaper of death, now say my name!” Guards involved in last weekend’s attack are now “on leave,” and the FBI may investigate. 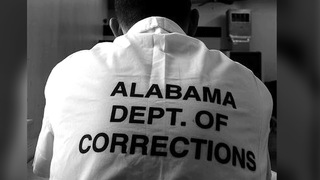