The House of Representatives has voted to pass President Biden’s $1.9 trillion pandemic relief package that includes an increase to the federal minimum wage from $7.25 to $15 an hour, which could now be stripped out in the final bill after the unelected Senate parliamentarian found it does not comply with budget rules. Democratic Senators Joe Manchin of West Virginia and Kyrsten Sinema of Arizona have also said they’ll oppose the measure. Congressmember Ro Khanna of California says the parliamentarian “misruled” in this case and that Democrats should pass the wage hike anyway. “I don’t know any part of this country where someone can survive on $7.25,” he says. “There is precedent for not listening to the parliamentarian’s advice, and we are hopeful that the vice president, or whoever is in the Senate chair, will do that.”

In a party-line vote, the House voted Saturday to pass President Biden’s $1.9 trillion pandemic relief package, which includes $1,400 stimulus checks to people who make less than $75,000 a year, as well as funding for expanded unemployment insurance, vaccination programs, school reopenings, and more relief for small businesses.

The package also includes a measure to increase the federal minimum wage from $7.25 to $15 an hour, over five years, which could now be stripped out as it heads to the Senate after the unelected Senate parliamentarian ruled it does not comply with budget rules around reconciliation. In response to the Senate parliamentarian declaring last week that including that $15-an-hour minimum wage increase in the package goes against the rules of reconciliation, Senators Bernie Sanders and Ron Wyden say they’ll push for an amendment to penalize large companies that pay workers less than $15 an hour. Democratic Senators Joe Manchin of West Virginia and Kyrsten Sinema of Arizona have also said they’ll oppose the $15-an-hour minimum wage, despite the fact that the people of their states support it. The White House said Biden would respect the parliamentarian’s decision, but progressives are pushing back on this.

For more, we go to Ro Khanna, Democratic congressmember from Silicon Valley in California.

Your response to what happened? And explain exactly what this part of the bill is, that you passed in the House. And what is going happen in the Senate?

REP. RO KHANNA: Amy, at the heart of what Democrats stand for, it’s giving working-class Americans, middle-class Americans a raise. The minimum wage is at $7.25. I don’t know any part of this country where someone can survive on $7.25. The bill we passed says it needs to be raised to $15. It’s a gradual raising. The $15 isn’t until 2024. Many states already have $15 laws. As you pointed out, this is popular in both blue states and red states. Florida passed recently a $15 minimum wage.

The reality is that we will not be able to get this done unless we do it through reconciliation or eliminating the filibuster. We simply don’t have 10 Republican votes. And that’s why we believe that we need to have this part of the reconciliation package in the Senate.

The parliamentarian, though a person, in my view, of integrity, misruled or gave a false opinion in this case. I believe the minimum wage clearly has a budget impact. If you raise people’s wages, they will pay more taxes. It certainly has more of a budget impact than the repeal of the ACA had, which the parliamentarian had ruled in order in reconciliation.

AMY GOODMAN: Explain that, Congessman Khanna. Explain exactly what can happen and what that precedent was, a previous vice president.

Now, people say, “Well, you already have a couple senators who are going to vote against it anyway.” First of all, people often say one thing. It’s very different to vote against the president’s first major initiative. I don’t think they will sink the entire COVID deal over this issue. Secondly, if we are even going to have compromise or negotiation with senators who may disagree with the $15, we first have to rule it in, so they have an incentive to negotiate, understanding that it can be part of the reconciliation package.

AMY GOODMAN: So, you have people like Raphael Warnock, who won but has to run again in two years, from Georgia. It’s wildly popular in Georgia, $15 an hour. You have Mark Kelly, Arizona. It’s popular in Arizona. He also runs again in two years. The significance of these congressmembers — these senators, like Manchin, where it’s popular in West Virginia — he’s now proposing a $11-an-hour minimum wage — but that this is bipartisan, multipartisan, $15 an hour is supported across the country?

REP. RO KHANNA: It is. And it’s a moral issue. I think people recognize the extraordinary wealth generation that we’ve seen, especially in the pandemic, where districts like mine, in Silicon Valley, many have done extraordinarily well because of the digitization of the economy, made trillions of dollars, that we can afford in this county for every person to make at least a $15 wage, that that can be and should be the floor. This is one of the few issues that has broad support across the political spectrum. And it is something that we must deliver on because of our core principles and because it will help us mobilize people that we need to continue to maintain our majority and continue to succeed politically.

AMY GOODMAN: What that means — right? — for Democrats to maintain the majority, is respond to what most people want. I think Politico shows 76% of Americans, more than three-quarters of Americans, back the overall bill, including 60% of Republicans. But not a Republican voted for it. And that goes larger than the $15 an hour. But I wanted to ask you about what other means of getting that passed, if it’s stripped out of the Senate bill.

AMY GOODMAN: And what does eliminating the filibuster mean?

REP. RO KHANNA: Eliminating the filibuster means that it would take a 51-vote — 51 votes to pass any major bill in the Senate. And right now, of course, it takes 60 votes.

Adam Jentleson has a brilliant book which explains — and I didn’t understand the history of the filibuster, but he explains that it was actually an invention of Calhoun, who used the 60-vote requirement to do the bidding of the slave states. And then it was invoked time and time again in the civil rights era to block civil rights legislation. And as I pointed out, actually, it’s ironic that Nelson Rockefeller overrules the parliamentarian to try to lower the impact of the filibuster from 67 votes to 60 votes.

But this history of the filibuster being tied to Jim Crow is important and highlights why we need to overturn it. Reverend Barber has said — I was talking to him recently — this is a moral issue of our time. The people who are often most affected with low wages are Black and Brown, many women. This is an issue of justice. And we cannot let these procedures stand in the way — illegitimate procedures stand in the way of what is just and right.

REP. RO KHANNA: Well, Amy, I’m never going to concede defeat, and we will continue to fight. The next fight then would be: Let’s make sure it’s in the next reconciliation.

But I think this is a moment to act. This is our best chance, for the reasons you mentioned. There are a lot of good things in this bill. They have aid for state and local governments, aid to help schools open, aid for vaccination, aid for children in poverty. And so, in a bill that is so popular, that is our best chance of having minimum wage part of it, at the height of the president’s popularity, approval, in his first hundred days. It is always the best chance to get meaningful legislation.

One point: While the bill is tremendous in many ways, and I voted for it, and I will vote for the final package, whatever is in it, but the important thing is that the $15 minimum wage is not just one year. It represents a move toward structural change in this country about an economy that isn’t working for people. And that’s really the question: Do you believe that we need structural change in America for those left behind? I do.

AMY GOODMAN: Ro Khanna, I want to thank you for being with us, Democratic congressmember from California, member of the House Committee on Oversight and Reform. 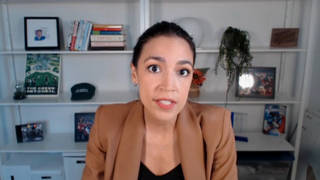