The COVID-19 pandemic has fueled a sharp increase in the number of people going hungry worldwide, along with conflict and the impacts of climate change. A new report on the state of food security and nutrition in the world found about one-tenth of the global population were undernourished last year, more than 2.5 billion people did not have access to sufficiently nutritious food, and one in five children now face stunted growth. Saskia de Pee, the World Food Programme’s head of systems analysis for nutrition, describes how the impact is “going to be long-term.”

AMY GOODMAN: This is Democracy Now! I’m Amy Goodman, with Nermeen Shaikh, as we look at how the COVID-19 pandemic has fueled a sharp increase in the number of people going hungry around the world. A new report on “The State of Food Security and Nutrition in the World” found about one-tenth of the global population is undernourished last year. More than two-and-a-half billion people lacked access to sufficiently nutritious food. The United Nations says one in five children around the world now face stunted growth.

This is 25-year-old Zetina, who lives in a village in western Madagascar, has not been able to work during the pandemic. She has three children who are malnourished. She spoke to Al Jazeera English.

ZETINA: [translated] Without this aid, we would have died. We’ve been eating plant roots, which gave us permanent stomachaches. As a woman, I personally no longer have enough energy to go and dig up those roots. Even men are unable to do so anymore.

AMY GOODMAN: For more on how COVID, as well as conflict and the climate crisis, are contributing to the rising level of hunger, we’re joined by Saskia de Pee, who is the World Food Programme’s head of systems analysis for nutrition.

Welcome to Democracy Now! Cann you lay out the findings, Saskia, of this global report?

So, the global report shows that the increase of undernutrition — meaning hungry people — has really increased, to up to 811 million in 2020. And it’s a consequence, as you said, of conflict, of climate change and climate shocks, as well as the economic downturns, where it’s really the COVID pandemic that has sparked a lot of that.

And furthermore, there’s a lot of malnutrition that comes with that. We saw a fifth of children with stunted growth. It’s their growth, and it’s their development. So, suffering malnutrition early in life has a prolonged effect throughout the rest of life. So, it affects ability for schooling. It affects income earning as an adult. And it affects health, noncommunicable diseases — diabetes, cardiovascular disease — as an adult, as well. So the consequences of the hunger and the malnutrition increase that we’re seeing today is going to be long-term.

AMY GOODMAN: I want to go to the chief economist of the Food and Agriculture Organization, Máximo Torero, laying out the key findings also of this report.

NERMEEN SHAIKH: So, Saskia, you talked earlier, and as did Máximo now, about undernourishment and the long-term effects of undernourishment, especially on children. Could you say how many children have been impacted by hunger or undernourishment? And what areas are worst impacted? Where are people the most hungry, or more people hungry?

SASKIA DE PEE: So, the largest number of hungry people is in Asia. The largest proportion of hungry people is in Africa. There are about — there’s many children suffering acute malnutrition, and people — children can suffer that multiple times in a year or in their young life. And there’s — stunted children is around 22%, and it has increased because of COVID. And the projections are that also for — in 2030, we will still see the impact of the stunting from the undernutrition early in life that’s happening today.

NERMEEN SHAIKH: And could you explain, Saskia, what is the hidden hunger? And what are the distinctions between a healthy diet and a sufficient diet? And how was that taken into account in the report?

SASKIA DE PEE: Yes, and the report reminds us that 3 billion people were unable to afford a healthy diet. And that’s actually the case in 2019. And we’re seeing an increase with at least 140 million people because of COVID now. And it’s not only the number who cannot afford, but it’s also the extent to which they cannot afford.

So, that healthy diet, a synonym for that would be a recommended diet. So it’s a diet that gives us enough vegetables, fruits, a good variation of protein-rich foods. It’s as food-based dietary guidelines tell us how to eat.

And doing that at the lowest possible cost, that has been the benchmark for the 3 billion. As I say, it depends to what extent you cannot afford such a recommended or healthy diet. So, if you can only afford 50% of that, your diet is of much lower quality than if you cannot afford the last 10% of that cost benchmark. When you can only afford 50%, you’ll have deficiencies of vitamins, of minerals. And you may not really notice it, but those affect like your energy levels, your brain development as a child. It affects many bodily functions, but you don’t really feel hungry, nor do you look hungry. So, that number of up to 811 million people hungry, beyond that, there’s also many more people who suffer that hidden hunger.

AMY GOODMAN: So, what is the World Food Programme’s most important demand for dealing with this crisis of a tenth of the world hungry?

SASKIA DE PEE: Yeah. So, we are planning this year to reach 138 million people directly with our food assistance, so ensuring that they have better access to foods, which comes in different forms. It comes in in-kind provision of food. It also comes in the form of cash, so that they can participate in the local market.

And that brings us also to be engaged in food systems, in social protection systems, so to provide a way for the systems that people engage with on a daily basis to provide better for them, and to also make a connect. So, do you get some social assistance, for example, in the form of cash? How —

SASKIA DE PEE: How can that cash be enough? And how can the food system have the right options available for you to purchase?

AMY GOODMAN: We have to leave it there, Saskia de Pee of the World Food Programme. I’m Amy Goodman, with Nermeen Shaikh. Be safe. 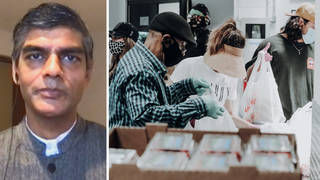