Nearly 100 women from around the United States were arrested outside the Supreme Court as they marked the 173rd anniversary of the first women’s rights convention at Seneca Falls with a protest calling for voting rights and economic justice. We speak with Reverend Liz Theoharis, co-chair of the Poor People’s Campaign and one of those who was arrested. She says Congress needs to scrap the filibuster, pass voting rights legislation and pass a “bold infrastructure bill” that addresses economic inequality, as well as the climate. She also discusses the work of her father, historian Athan Theoharis, who recently died after a lengthy career dedicated to exposing FBI misconduct.

On Monday, more than a hundred women from around the United States were arrested outside the Supreme Court as they marked the 173rd anniversary of the first women’s rights convention at Seneca Falls with a protest calling for voting rights and economic justice. Among them, Reverend Liz Theoharis, co-chair of the Poor People’s Campaign. She has since been released and joins us now, as the Poor People’s Campaign prepares to hold a Selma-to-Montgomery-style march next week in Texas, from Georgetown to Austin, to demand Congress protect voting rights. Liz Theoharis is executive director of the Kairos Center at Union Theological Seminary.

Thanks so much for being with us, Reverend Theoharis. Welcome back. Why did you get arrested?

REV. LIZ THEOHARIS: Well, I and nearly a hundred other women got arrested in front of the Supreme Court, in front of the Senate office buildings, because our democracy is in peril. We are living in a moment when 17 states have passed voter restrictions in the past — since 2020, and where, since the 2020, about more than almost 400 voter suppression kind of legislation has been introduced in states. And we see the connection between this attack on voting rights and all of the other issues that impact, especially the 140 million poor and low-income people in this country.

And so, we were there demanding four things. One, to end the filibuster, and not just for voting rights, but for all the things the filibuster is being used to block in this society right now. The second is to pass all the provisions of the For the People Act. The John Lewis Act is not enough. We need the For the People Act and restoration of the 1965 Voting Rights Act. And then the fourth demand is to raise the minimum wage to a $15-an-hour minimum wage immediately, because we see this connection between economic justice and voting rights. And so, we were there making sure our voices were heard, standing up for democracy, because we need to do that in this moment.

REV. LIZ THEOHARIS: So, indeed, we need to get rid of this filibuster so that we can pass a bold and broad infrastructure bill that looks at infrastructure, including climate resilience, including education, including new water systems, that doesn’t just put on communities and on municipalities the privatization of these resources. We need a bold infrastructure bill, and we need to stop this moral obstructionism. That’s what’s going on right now when you have a minority of senators blocking the will of the people.

People across the board, across party lines, across geography, across race, across sexuality and gender, need — need the very things that are in a bold infrastructure bill, and need to expand healthcare and need immigration reform and need so many other things. People are demanding it. And right now we have elected officials that are blocking the needs and the demands of the people, including with this infrastructure bill.

AMY GOODMAN: Reverend Theoharis, you did all of this, these protests this week, just in the wake of your dad dying. Our condolences on the death of your father, Athan Theoharis. So, I wanted to ask you about him. He was a remarkable figure, a prominent historian who exposed FBI misconduct. He wrote several books that detailed how the FBI investigated political opponents, intimidated critics and illegally eavesdropped on activists. He died July 3rd at the age of 84. I wanted to play your dad, Athan Theoharis, speaking in 2008.

ATHAN THEOHARIS: I think the history of the FBI raises very sharply that issue of accountability, and how do we, as we deal with different problems, ensure that the agency does not violate individual rights, or, if we look at the essence of the American constitutional system, accepts the limited role of the government as defined by law. And the history of the FBI suggests that this problem has not been addressed.

AMY GOODMAN: Historian Athan Theoharis. Liz Theoharis, can you talk about your dad’s work? He also co-authored a book with your sister, the historian Jeanne Theoharis.

REV. LIZ THEOHARIS: Yes, thanks so much. And thanks for playing that clip. It’s so good to hear his voice and his analysis. We surely need it in this moment, when there is an abuse of power going on and when we are rising up to defend democracy, like I and so many people learned from my father.

You know, my father really helped to break open, expose the abuses of the FBI and pave the way for generations of journalists and scholars and activists to both be able to access documents, figure out how to use FOIA to actually look at what the FBI was doing and is still continuing to do, and have a sense of how these federal intelligence agencies, the surveillance that has been going on for decades in our society, is being used to suppress activism, rather than actually anything that’s about defending democracy or making this country any better.

And so, his work lives on in his students, in the activists that continue to defend democracy and stand up for voting rights, that continue to do all the work he was so dedicated to. And I do encourage folks to check out his work — the 23 books he wrote, the guide for how you access your FBI files, and so much of his analysis — that still is so prescient in our society today.

AMY GOODMAN: Interesting that you talk about the FBI surveillance. Are you concerned about Congress putting into place laws, after the bloody insurrection, that ultimately will be used against, well, people like you, the Reverend Dr. Liz Theoharis, against Reverend Barber, people — other people protesting, but this being done in the name of stopping an insurrection of Trump supporters?

REV. LIZ THEOHARIS: Yes, indeed. I mean, what we are seeing in states across the country and on a federal level is a whole wave of anti-protest bills that are about targeting folks that are coming forward, not to tear the society down, but for what we’re calling them, a moral resurrection. And indeed, right now folks should be very aware of these anti-protest laws and of the way they’re being used to deny voting rights, to crack down on protesters that are calling out things like Line 3. Just a whole host of the issues that are on this program, today and every day, are the very things that are under attack, when actually what we need is to defend the democracy and defend our civil liberties, and have the right to say what’s not right that’s going on, and then to build a movement to do something about it.

AMY GOODMAN: Again, our condolences. And thanks so much for being with us, Reverend Dr. Liz Theoharis, co-chair of the Poor People’s Campaign. I’m Amy Goodman. Stay safe. 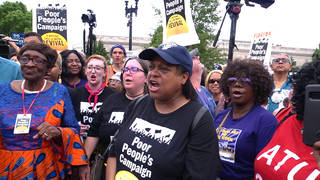