With the Democratic-led House of Representatives expected to pass the John Lewis Voting Rights Act, pressure is growing on the Biden administration and Senate Democrats to abolish the filibuster, without which new voting rights legislation and other Democratic priorities have no hope of passing the Senate. We speak with Ben Jealous, president of People for the American Way and former president of the NAACP, as voting rights groups protest in front of the White House. Jealous says the action is intended to “up the pressure on Biden” to call on the Senate to get rid of the filibuster. “The filibuster was the insulator of Jim Crow. It is an accident of legislative history. It’s not part of the Constitution in any way,” Jealous says.

StoryJun 22, 2021Republicans Won’t Even Debate “For the People Act” as They Flood States with Voter Suppression Bills

AMY GOODMAN: This is Democracy Now!, democracynow.org. I’m Amy Goodman, as we end today’s show in Washington, D.C., where House lawmakers are set to vote this week on the John Lewis Voting Rights Act, which restores key provisions of the Voting Rights Act that were gutted by the Supreme Court. The act can pass the House without bipartisan support but will need 10 Republican votes in the Senate to overcome a filibuster. This comes as the Democrats’ other voting rights bill, the For the People Act, is also stalled in the Senate and Republican-controlled state legislatures have introduced literally hundreds of restrictive voting laws this year.

For more, we go to Washington, D.C., where we’re joined by Ben Jealous, president of People for the American Way, former president of the NAACP. He’s helping to lead a protest today at the White House demanding President Biden call on the Senate to eliminate the filibuster as an obstacle to voting rights reforms.

Ben, you, along with the League of Women Voters, Black Voters Matter and others, are taking this issue right to Biden’s doorstep. And you’re planning to be arrested?

BEN JEALOUS: That is very much possible. There will be civil disobedience. And this begins what will likely be a series of such protests as we up the pressure on Biden to call on the Senate to get rid of the filibuster as an obstacle to protecting the voting rights of people across this country.

AMY GOODMAN: So, explain who is opposed to getting rid of the filibuster and what exactly these acts mean for defending voting rights, why you’re willing to put your body on the line today.

AMY GOODMAN: So, earlier this year, Democratic Senator Joe Manchin of West Virginia wrote a piece for the Charleston Gazette-Mail headlined “Why I’m voting against the For the People Act.” In it, Manchin wrote, quote, “I believe that partisan voting legislation will destroy the already weakening binds of our democracy, and for that reason, I will vote against the For the People Act.” Manchin also wrote, quote, “Democrats have again proposed eliminating the Senate filibuster rule in order to pass the For the People Act with only Democratic support. They’ve attempted to demonize the filibuster and conveniently ignore how it has been critical to protecting the rights of Democrats in the past.” Ben Jealous, your response?

BEN JEALOUS: Again, there are multiple options on the table. And one of them is to just simply change the rules for the purposes of voting rights reforms. The filibuster was the insulator of Jim Crow. It is an accident of legislative history. It’s not part of the Constitution in any way. But it has been used again and again to stymie civil rights progress.

Joe Manchin is exactly the reason that we’re calling on Biden to put pressure on the Senate. Like Johnson before him, Biden has been given a situation where, yes, he has to lead on the economy and he has to make tough decisions about wars overseas, and yet he also has to act with courage to protect voting rights, to protect our democracy, to protect civil rights. And so, this president has said that one of the greatest crises facing our democracy are these state-level voter suppression laws. Well, if you believe that, Mr. Biden, then act on it and have the courage to call on your former colleagues on the Senate to do whatever they have to do to get these laws passed.

AMY GOODMAN: So, how do you respond to Biden, who keeps on saying he wants bipartisan support, and so he doesn’t want to eliminate the filibuster?

BEN JEALOUS: Well, first of all, last time I checked, Senator Murkowski has not taken support of the For the People Act off the table. Also, Senator Manchin has been involved in the redraft of that bill. So that bill is still very much alive. You know, on the Senate, things are a dance, and people can be against something this week, and then get a couple of words changed, and then they’re for it next week. It’s not as cut and dry as that op-ed might suggest.

AMY GOODMAN: Earlier this year, President Biden said he supports a return to the talking filibuster, which requires senators to delay a bill by talking on the Senate floor. His comments came after Senate Minority Leader Mitch McConnell said he would go “scorched earth” if Democrats move to eliminate the filibuster, turning the Senate into, he said, “a hundred-car pile-up,” and warned Republicans would retaliate with conservative laws if and when they retake the Senate. This is Senate Majority Whip Dick Durbin on the Senate floor, where he called to abolish the filibuster, referring to it as a “legislative rock bottom.”

AMY GOODMAN: So, if you can respond to that? And, Ben, People for the American Way used to be pro-filibuster. What happened?

BEN JEALOUS: Well, one thing, we saw Mitch McConnell change the filibuster rules in order to pack the court with far-right-wing justices, which, again, this is the guy who said that he wouldn’t even push through a justice if it was in the last year, and then he forgot about that. Republicans are very comfortable using power when they have it. They’re very comfortable abusing power when they have it. They have packed our Supreme Court with justices, even though they have lost the popular vote again and again and again. This is what we’re dealing with. And so, you know, Mitch McConnell and his hypocrisy don’t hold much weight with us.

There was a time when it felt like there was some decency in Washington. What we have right now is unbridled corruption in states like Texas and Georgia, where they have voted to empower politicians with the power to override the people in the next election. And the only antidote to state-level voter suppression and that type of corruption, quite frankly, is strong federal voting rights bills. That’s how we ended Jim Crow. And that’s how we have to deal with this situation.

Ben Jealous: Rev. Jesse Jackson Is Hospitalized with COVID-19. “We’re All Praying for Him.”

NEXTBen Jealous: Rev. Jesse Jackson Is Hospitalized with COVID-19. “We’re All Praying for Him.” 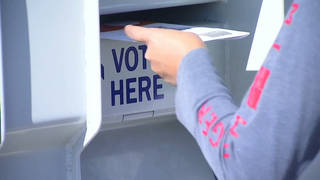