Thousands in El Salvador took to the streets Wednesday to protest President Nayib Bukele’s growing consolidation of power and a new law making El Salvador the world’s first country to recognize the highly volatile cryptocurrency bitcoin as legal tender. Protesters in El Salvador are also criticizing a recent court ruling that paves the way for Bukele to run for reelection in 2024. El Salvador’s turn to bitcoin comes as a “surprise” to many, but has been pushed by Bukele as a way to lessen remittance fees, says Jorge Cuéllar, an assistant professor of Latin American, Latino and Caribbean studies at Dartmouth College. “There’s no reason why bitcoin should be at the top of the government agenda in a moment of pandemic, of water stress, of food insecurity, of depressed wages,” Cuéllar says. “People are very suspicious of this.”

StorySep 01, 2022“No Tech for Apartheid”: Google Workers Push for Cancellation of Secretive $1.2B Project with Israel

ADRIANA MONTENEGRO: [translated] They promised to do things differently, and they’ve been worse. We are here in the midst of the pandemic because this dictatorship is deadlier than the virus. We aren’t going to stay home with our arms crossed, because our parents and grandparents and uncles died for a country free of dictatorships and corruption. We are still seeing that. Now it is our turn to resist.

AMY GOODMAN: Protesters in El Salvador are also criticizing the recent court ruling that paves the way for President Bukele to run for reelection in 2024.

Professor Cuéllar, it’s great to have you with us. Explain the significance. Why has El Salvador become the first country in the world to recognize bitcoin as legal tender? What does it mean?

JORGE CUÉLLAR: So, the turn to bitcoin, Amy, is actually quite a surprise to a lot of us. There’s no reason why bitcoin should be at the top of the government agenda in a moment of pandemic, of water stress, of food insecurity, of depressed wages. But the big sell by Bukele around bitcoin has been that it will lessen remittance fees to the country. As you know, Salvadorans are one of the largest populations that remit money to El Salvador, which is a quarter of GDP. And so, one of his arguments for the turn to bitcoin has been to lessen those commissions that entities like Western Union or MoneyGram take on every remittance sent to the country. But, as you can see, people are very suspicious of this. And, in fact, it’s been shown that those remittance commissions are actually higher in bitcoin than they are with traditional wire transfer services.

NERMEEN SHAIKH: Jorge Cuéllar, could you also explain how this rollout has been problematic? There is the Chivo wallet. People in El Salvador have been offered an incentive of $30. But explain what’s happened with the rollout, and also the implications of numbers of people in the country who don’t have access to cellphones to use the app. And what demographics, what groups in the country will be most at risk as a result of bitcoin being used as legal tender?

JORGE CUÉLLAR: Yeah. So, the rolling out of bitcoin in El Salvador and using Chivo wallet, this app that people can download from smartphone stores, has been very glitchy, has been — has often been down for peak times during the day, and it’s been a frustrating experience for many people who have tried to sign up and use it and experiment with the app. ATMs themselves have fallen all the time, repeatedly, leading to a lot of user frustration and showing that bitcoin is not only an unstable currency, but even the infrastructure that El Salvador has, very improvised up to the September 7th rollout, has been very piecemeal and uneven. Right?

And so, what this has done, in effect, the $30 in bitcoin that has incentivized folks to sign up, has been something that many poor Salvadorans and common people are interested in. It functions as a kind of economic stimulus in times of pandemic. And so folks are very eager to sign up. But, in fact, the system has been so erratic that it hasn’t really worked. But what I’m seeing, based on popular use, is that people are signing up for the app, using — getting their $30 that is offered by the government to sign up, and actually just withdrawing it. And so, they’re withdrawing it into U.S. dollars and going out to the restaurant and getting some food, buying some groceries, and actually just leaving the app to the side, because, again, the recurrent suspicion of bitcoin and Chivo wallet, which is shrouded in so much ambiguity and lack of educational campaigns by the government to really tell people what bitcoin is, what it means, how it impacts daily life and how it sort of intersects with daily activity.

And this has been one of the most challenging — or, one of the most challenged sites, where the social movements have drawn attention to bitcoin as being more of a ploy for supporting illicit accumulation, narco money, money laundering, and for foreign investors, who are the primary audience of bitcoin, to come into the country and invest and transform this kind of monopoly immaterial money into real estate, into business, into other forms of currency and wealth that is inaccessible, in general, to the common Salvadoran person.

AMY GOODMAN: Jorge, what are the environmental implications of bitcoin? And how does it fit into the right-wing philosophy of President Bukele as he tries to consolidate power?

JORGE CUÉLLAR: So, the bitcoin rollout actually comes after various constitutional moments of erosion, where he’s stacked the Legislative Assembly, where he’s dismissed magistrate and constitutional judges. So the bitcoin project actually is shadowed by this kind of authoritarian consolidation, which has been part of his kind of command economy, where he seems to be the one giving orders and everybody has to follow along.

But in terms of the environmental implications of bitcoin, it operates through computers and through high-energy use. And so, one of the big pitches that Bukele made initially to foreign investors to come and bring their bitcoin to El Salvador was that they would offer cheap energy. And this cheap energy, Bukele claimed, was going to come from volcanic geothermal sites that he hopes to build around the country’s volcanoes. Already geothermal is used in El Salvador in very uneven ways, but he’s trying to ramp this up. And this will have environmental impacts in the country, in a place that’s extremely deforested, is living through high levels of water stress and is part of the question of food scarcity that often drives things like migration. So, bitcoin is at the heart of ecological concerns for El Salvador.

AMY GOODMAN: We want to thank you for being with us, Jorge Cuéllar, assistant professor at Dartmouth College. We’ll link to your article in the New Left Review headlined “Bitcoin Sanctuaries.” His forthcoming book, Everyday Life and Everyday Death in El Salvador. 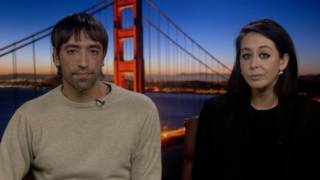