More than a dozen civil society groups in India have written an open letter to Johnson & Johnson and the U.S. government, urging the pharmaceutical giant to cancel export of Indian-made COVID-19 vaccine doses to rich countries and instead focus on distributing them in the Global South. “The 600 million doses that Johnson & Johnson is manufacturing currently … in India should go where the vaccines are most needed, which is the Indian subcontinent, the African continent and the COVAX Facility,” says public health activist Achal Prabhala, who co-authored the letter and is coordinator of the AccessIBSA project, which campaigns for access to medicines in India, Brazil and South Africa.

AMY GOODMAN: This is Democracy Now!, democracynow.org. I’m Amy Goodman, with Juan González, as we end today’s show looking at the pandemic and vaccine inequality. In India, a coalition of groups are calling on Johnson & Johnson to stop exporting Indian-made vaccines to wealthy nations like the United States at a time when hundreds of millions of people remain unvaccinated in India, as well as in Africa. The groups are also urging President Biden to force Johnson & Johnson to license its vaccine to drug manufacturers in India and other nations to help produce more vaccines.

We go now to Bangalore, India, where we’re joined by Achal Prabhala. He is a coordinator of AccessIBSA project, which campaigns for access to medicines in India, Brazil and South Africa.

Welcome back to Democracy Now!, Achal. If you can start off by laying out your demand?

ACHAL PRABHALA: Thank you, Amy. It’s lovely to be here.

A group of us from civil society, over a dozen organizations in India, drafted a letter very recently to Johnson & Johnson and the Biden administration with a very simple demand, which is that the 600 million doses that Johnson & Johnson is manufacturing currently at a company called Biological E in India should go where the vaccines are most needed, which is the Indian subcontinent, the African continent and the COVAX Facility, rather than where Johnson & Johnson most wants to send them to, which, on the basis of recent history and the company’s experience in South Africa, is Europe and the United States, where it has large, unfulfilled orders, which are quite lucrative, which it seems, in an unseemly manner, eager to supply.

JUAN GONZÁLEZ: And, Achal, as it stands now, J&J has only one partnership with an Indian company, but while Pfizer and Moderna have none in India, South America or Africa. Explain why the pharmaceutical companies are reluctant to establish such partnerships.

ACHAL PRABHALA: Juan, there is a curious difference in the way that Johnson & Johnson is licensing its vaccine around the world. What they’re doing is to provide what’s called contract manufacturing. They are farming out the production of their vaccine to other companies, but they retain control of where those vaccine doses go. So, this is a little unlike AstraZeneca’s contracts with the Serum Institute in India, which was supposed to be the engine for the COVAX Facility, the global philanthropy that was going to distribute vaccines to the poorest countries in the world. The Johnson & Johnson contracts with Biological E in India and Aspen Pharmacare in South Africa are really under the control of Johnson & Johnson. They decide who they should go to.

And these vaccine contracts were signed in 2020, when the pandemic was in a different state, when these vaccines were merely hypothetical. The problem with the way Johnson & Johnson is now enforcing these contracts is, in September 2021, which is a very different world, where a majority of the adults in the United States and Europe have been vaccinated, where by no means the majority or anything close to that have been vaccinated in the African continent or India, Johnson & Johnson believes it still has the right to send vaccines where it wants to, rather than where it has to and where the vaccines are most needed.

Now, of course, Pfizer and Moderna don’t have production facilities here, but the fact is that they are outsourcing their vaccine production to facilities in Europe and in other parts of North America. But the truth is that Johnson & Johnson, Pfizer and Moderna are of a piece. What they’re doing is to say, “We’re not going to provide access contracts. We’re not going to provide licensed manufacture of our vaccine to anyone in order for them to be able to supply the regions that they’re in. We’re just going to make the largest number of vaccines that we can, under our control, and then send them where we want.”

Now, the irony of this is that, unlike Pfizer and Moderna, whose vaccines remain robustly desirable in the United States and Europe, the Johnson & Johnson vaccine, in fact, is not. There’s poll after poll that shows that it’s the least desirable vaccine among ordinary Americans, for instance, and it’s not like there is surging demand for the vaccine in Europe, either. So it’s a bit of a conundrum, because with the Johnson & Johnson vaccine, no one seems to want it in the United States. It doesn’t seem to be able to make its own vaccine. It’s supplied less than 10% of what it was supposed to to the U.S. It’s supplied under 25% of what it was supposed to to Europe. And yet, at the same time, there are studies from South Africa now that show that the vaccine adequately does its job in protecting people against hospitalization and death and even transmission. So there are lots of people in a majority of the world who would love to have the J&J vaccine, except they can’t. And so, I think it’s a particularly absurd situation that Johnson & Johnson would choose to make vaccines in a part of the world that desperately needs them, and then send them to another part of the world that not only doesn’t need them, but doesn’t seem to want them.

AMY GOODMAN: Achal, just put this in human terms: Who gets the vaccine? Who has access to it, the percentages that we’re talking about, in Africa, in Asia, compared to the United States and Britain, where they’ve already started the booster on a mass scale, the third shot?

ACHAL PRABHALA: There’s something astonishing about September 2021, because now we’ll be nearing 10 months into a world in which vaccines exist and were available, and yet the death toll remains 10,000 people a day. And that’s largely because less than 3% of the population of the African continent has been vaccinated, less than 15% of the Indian population has been vaccinated, while between 50 to 70% of the adults in the United States and Europe have been vaccinated. So, what we’re looking at is a world in which the pandemic is under control, with occasional flare-ups and alarms and problems around mass vaccination, but, nevertheless, relatively under control in the U.S. and Europe, and absolutely not under any kind of control in a majority of the world, where the majority of the world’s population lives.

In such a situation, what Johnson & Johnson did in South Africa, which it had to backtrack on, which was to send 300 million doses, which could have vaccinated 300 million people because the Johnson & Johnson vaccine is single dose — to send those vaccines to Europe, in majority, was a mistake. They were called out. People were outraged. And they backtracked. But now they’re set to repeat exactly the same action with vaccines for 600 million people in India. And the absurdity of the situation, and the inability of Johnson & Johnson to see how absurd it is, I think, is astonishing. But what’s worse is, actually, that we have now, thanks to the Russians and thanks to the Sputnik V vaccine, which showed good efficacy, but, unfortunately —

AMY GOODMAN: Achal Prabhala, we want to thank you so much for joining us from Bangalore, India. I’m Amy Goodman, with Juan González. Stay safe. Wear a mask. 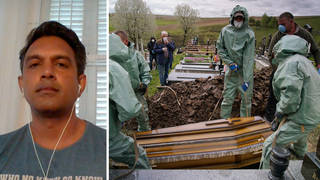