Criticism is growing of AUKUS, a new trilateral military partnership between Australia, the United Kingdom and the United States that the countries say is needed to counter China’s growing power in the Indo-Pacific region. As part of the agreement, the U.S. has agreed to help Australia build a fleet of nuclear-powered submarines, replacing a previous deal Australia had with France. China has denounced the deal, saying the countries are “severely damaging regional peace and stability, intensifying an arms race, and damaging international nuclear non-proliferation efforts.” Anthropologist David Vine, who tracks U.S. military bases overseas, says AUKUS will not only intensify regional tensions but also grow the U.S. military footprint in Australia. “There is no reason to be building new military bases in Australia or any part of the world,” he says.

Far less attention, though, has been paid to another aspect of the AUKUS partnership: how it will help the United States increase its military presence in Australia, where the U.S. already has at least seven military installations. This is Australia’s defense minister, Peter Dutton, speaking last week.

PETER DUTTON: I’m proud to announce that Australia and the United States will be significantly enhancing our force posture cooperation, increasing interoperability and deepening alliance activities in the Indo-Pacific. This will include greater air cooperation through rotational deployments of all types of U.S. military aircraft to Australia.

AMY GOODMAN: During the same news conference, the U.S. Defense Secretary Lloyd Austin focused part of his remarks on China.

DEFENSE SECRETARY LLOYD AUSTIN: We spoke in detail about China’s destabilizing activities and Beijing’s efforts to coerce and intimidate other countries, contrary to established rules and norms. And while we seek a constructive, results-oriented relationship with the PRC, we will remain clear-eyed in our view of Beijing’s efforts to undermine the established international order.

For more, we go to Oakland, California, to speak to David Vine, professor of anthropology at American University who tracks U.S. military bases overseas. He’s just written a new article for Responsible Statecraft titled “Not just about subs, AUKUS expands US military footprint in Australia, too.” His recent book, The United States of War: A Global History of America’s Endless Conflicts, from Columbus to the Islamic State.

DAVID VINE: First, it’s a pleasure to be with you and Nermeen. Thank you so much for having me.

It is a tremendously disturbing, dangerous, reckless and, ultimately, racist announcement and alliance that the three governments have announced. In answer to your question about whether this is a new cold war, I think this announcement of this triple alliance does — ultimately, is an announcement of a near formal declaration of a new cold war, that leads us — can lead us down a path toward a war that could be not only cold, but it really should be unthinkably a hot, possibly nuclear, war between the two most powerful nations on Earth, China and the United States.

Most of the focus has been on the sub deal, which has very disturbing elements. But I’m glad you are calling attention to the military buildup that the deal represents. I think it is helpful for people in the United States, in particular, to think: How would we feel if China last week had announced that it was entering an alliance with Russia and Cuba to build up military bases and military forces, air, naval and land forces, in Cuba, to also be engaged in weapons development, including hypersonic weapons development and electromagnetic weapons development, to engage in increased cyberintelligence gathering, spying and space activities with Cuba, to also have a mining deal in place and to be building nuclear-powered submarines that involve the transfer of weapons-grade — that is, nuclear weapons-grade — highly enriched uranium to Cuba? How would we feel if the shoe was on the other foot, if we were faced with this kind of an alliance in our backyard?

That is what the United States announced last week with Australia and the U.K., that they are building up an already massive U.S. military presence in China’s backyard with additional bases, forces, weapons development, spy capabilities and the transfer of nuclear weapons technology to a non-nuclear power, that really undermines the nuclear nonproliferation regime, meaning it sets us back in our efforts to abolish nuclear weapons on Earth.

NERMEEN SHAIKH: Well, David, let’s go to President Biden speaking Tuesday at the United Nations, where he explicitly said the U.S. is not seeking a new cold war.

PRESIDENT JOE BIDEN: We’ll stand up for our allies and our friends and oppose attempts by stronger countries that dominate weaker ones, whether through changes to territory by force, economic coercion, technical exploitation or disinformation. But we’re not seeking — say it again — we are not seeking a new cold war or a world divided into rigid blocs.

NERMEEN SHAIKH: So, David, could you respond to what Biden said and also the fact that he seems now to be fulfilling the promise or initiative that Obama had suggested 12 years ago, which is this idea of U.S. foreign policy pivoting to Asia?

DAVID VINE: Yeah, in a way, I’m a bit tired of Biden’s words. He said some nice words at the U.N. about diplomacy, about humanitarian aid, about not wanting a new cold war with China. But his actions are very different. And, you know, for those of us, like myself, who supported his withdrawal from Afghanistan as absolutely the right thing to do and a withdrawal that was long overdue, he’s turning his back on diplomacy with this announcement. This is far more significant than, you know, any words he uttered at the U.N. about diplomacy and not wanting a new cold war.

That is what this represents. He is aligning these three powers against China. And I think we have to, again, ask, you know: How are Chinese leaders — how do we expect Chinese leaders to respond? This really risks setting off an increased arms race. And, you know, we shouldn’t be surprised if China looks to line up an alliance of its own, again, resembling the Cold War. And in so many ways, this is really Cold War-era thinking in many ways, 19th century thinking.

And I really hope and think the Biden administration can be much better than that. We are in no position to be building, to be spending any time, any energy building military alliances at this moment, when we have such grave security threats facing us, from global warming to global pandemics to hunger to inequality, global poverty. Those are the kinds of alliances we should be building. And those are the kinds of alliances that the United States can be building. I think, really, we have a choice now. We have a choice whether we want to firmly and finally turn our backs on war or — and engage in diplomacy and a different kind of alliance building focused on the real security threats facing us, or whether we want to firmly and finally commit to a new cold war with China that could be catastrophically damaging to the world. I mean, it could make the catastrophe of the last 20 years of war, where, by my estimate, 4.5 million people died in the U.S.-led wars, where we spent $8 trillion — “trillion” with a T — on war — you know, this new cold war will strip even more funds from the needs that are actually facing us and plow more money into the military-industrial-congressional complex. This is the choice we’re facing.

AMY GOODMAN: So, David Vine, you have this amazing map in your new piece for the Quincy Institute, highlighting every country where the U.S. has an overseas military base, around 800 U.S. bases, including 80 in South Korea, 119 in Japan. Take us on the tour in this last minute we have, and also talk about Africa.

DAVID VINE: Sure. But, by our estimates, there are now about 750 U.S. military bases abroad in 80 countries and colonies. Seven hundred and fifty, this is more than any other country in the world. And, in fact, it’s probably three times the number of all the other countries in the world combined, probably the largest collection of foreign military bases in world history. And as you mentioned, there are seven bases in Australia. In total, in the Asia-Pacific region, the United States easily has almost 300 foreign military bases surrounding China already. And now they’re calling for an increased buildup. There’s been a growing collection of U.S. military bases in Africa, as you mentioned, since around the early days after the attacks of 9/11. And it’s a collection of bases that touches every continent except Antarctica.

There is no reason to be building new military bases in Australia or any part of the world. The Biden administration needs to move in the other direction. And it was moving in that direction by closing bases and withdrawing troops from Afghanistan. It should be building on that by closing more bases, that are undermining U.S. and global security. But it’s not. And again, we face a choice between a path toward a permanent cold war —

AMY GOODMAN: We have to leave it there. David Vine, author of The United States of War. I’m Amy Goodman, with Nermeen Shaikh. Stay safe.

China Under Xi Jinping: From Human Rights Concerns to “Inter-Capitalist Competition” with U.S. 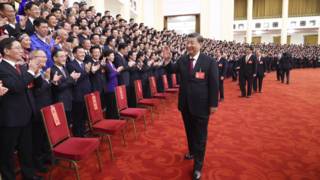 China Under Xi Jinping: From Human Rights Concerns to “Inter-Capitalist Competition” with U.S.