Former Pentagon adviser Ryan Goodman says former President Trump could have used the Insurrection Act to hold onto power during the January 6, 2021, attack on the Capitol by his supporters. “There needs to be reform of the Insurrection Act,” says Goodman, who authored the report “Crisis of Command: The Pentagon, the President, and January 6” for Just Security, where he is co-editor. He also discusses how Republican leadership from Congress, as well as agency heads from the FBI and the Justice Department, waged a coordinated response around Trump’s claims of voter fraud in an attempt to increase Republican voter turnout in Georgia. “The Justice Department used a lot of its resources, including the FBI investigations, to basically affect the outcome of the Georgia runoffs,” says Goodman. “That’s an extraordinary politicized use of the Justice Department and the FBI to do anything like that, to try to use it to shape an outcome of the election.”

StoryJan 06, 2022“Why Was the Federal Gov’t So Unprepared?” Newsweek Reporter William Arkin on Jan. 6

AMY GOODMAN: We end today’s show looking at the “Timeline for Anniversary of January 5: DOJ Election Fraud Investigations and GA Senate Runoff,” that was just published by Just Security and argues that while we mark the first anniversary of January 6th insurrection, quote, “an important episode involving the Jan. 5, 2021 Georgia Senate runoff may easily be lost in the mix.”

Welcome to Democracy Now!, Professor Goodman — no relation. So, you’re ending today’s show. Talk about the high points or low points of this timeline that you have laid out, beginning with January 5th.

RYAN GOODMAN: So, the high point is that the Justice Department used a lot of its resources, including the FBI investigations, to basically affect the outcome of the Georgia runoff. So, that was their attempt. We have, from very good reporting, that the speaker of the — the majority speaker of the Senate, Mitch McConnell, and Bill Barr engaged in a side agreement that they wanted to convince Republican voters in Georgia that Biden had won and that the election was conducted fairly. And this is now in December, where they had given up on Trump. But that’s an extraordinary politicized use of the Justice Department and the FBI to do anything like that, to try to use it to shape the outcome of an election. And many people have thought about Barr’s actions and the like, post the presidential election, as being nefarious, in different ways, after people voted. But this is even more nefarious, in a certain sense, because he was trying to affect how people were going to vote. That’s one of the high points.

The other high point — or, in a certain sense, low point for our nation — is it also demonstrates the power of disinformation. So, the ways in which Giuliani and members of the — Republican members of the House were promulgating these conspiracies around Georgia and how the election had been run, that actually pushed pressure inside the Justice Department, that it wasn’t just Bill Barr, but it’s other senior members of the Justice Department and the FBI say, “Oh, we have to open these investigations to respond to what the public is conceiving of in these elections,” not to predicate their investigations, as they’re supposed to do, which is evidence that a crime has been committed, but instead they open up these investigations based on the effectiveness of the disinformation campaign. So, it’s a remarkable case study in how the disinformation effort has affected powerful institutions like the Justice Department, and not just the people that we’ve heard of a lot before, like Bill Barr, but people below him.

AMY GOODMAN: Can you talk about how then-Secretary of Defense Christopher Miller and General Mark Milley, the chair of the Joint Chiefs of Staff, were both concerned about deploying the military because of what had happened during the Black Lives Matter protests, this whole argument that they didn’t want military in uniform on the streets again?

RYAN GOODMAN: So, there’s very strong evidence that that was very much their concern and that one of the best explanations for why we didn’t see the National Guard deployed more quickly is that they actually wrote into the rules for the deployment of the National Guard, specifically for January 6, of all sorts of limitations. And they were concerned about the, quote-unquote, “optics,” but they were also concerned very much that if the National Guard went into the Capitol, that President Trump, as commander of the D.C. National Guard, could, at the stroke of a pen, or essentially a tweet, recommission the Guard to use the military force to hold onto power. They were concerned that he would do something like invoke the Insurrection Act.

And, you know, one of the most remarkable episodes is on January 4th. Miller and Milley convene a Cabinet-level meeting. And at the meeting, they’re so concerned that they raise the question: Can we rescind the permits of these Trump supporters at the Capitol? They’re very aware of the threat of violence. On their minds are there Proud Boys and others. And they say this to the other Cabinet members.

And then there’s strong evidence that that explains the delay on January 6 itself, of this remarkable piece in which the National Guard is — you know, as William Arkin just described — gets there after the Capitol has already been secured. Very strong evidence that what was going on at the highest levels of the military inside the Pentagon is this deep concern of Donald Trump, that he would do the very thing of using the military to try to hold onto power.

AMY GOODMAN: And what would prevent that from happening again?

RYAN GOODMAN: In the future? I mean, unfortunately, we need legislation on this. And it’s not just the executive binding itself. And there needs to be reform of the Insurrection Act, for one.

And I think another piece that’s chilling about the episode is it is an instance, if you think about it, as the military is basically defying the commander-in-chief. And that’s not exactly the structure that we want in our government. So I think that it’s a chilling lesson in what happened with civil and military relations. In that instance, in a certain sense, the military landed the plane, so that they did, in a way, prevent that kind of an abuse of power.

But I’m very worried for our country, both in terms of what it might mean with another kind of despicable president who would use the military for their own political purposes, and I’m also worried for the country in terms of what it means about the military’s concerns that they have people within the military that would have even responded to Trump in that instance. And right now the Secretary of Defense seems to be on the road to trying to root out some of the extremists within the military, because I think that’s part of the concern that’s here. It’s not just about the laws, but it’s about political culture and white supremacists that are part of different institutions, including, unfortunately, the DOD.

AMY GOODMAN: Well, I want to thank you for being with us, Ryan Goodman, co-editor-in-chief of Just Security, former special counsel at the Pentagon. We’ll link to your timeline. 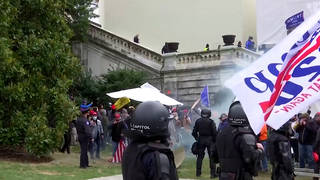