As nuclear powers ratchet up tensions around the Ukraine war, the U.S., NATO and Russia are carrying out nuclear war games. Meanwhile, anti-nuclear activists are calling on lawmakers and world leaders to “Defuse Nuclear War.” Their calls come on the 60th anniversary of the Cuban Missile Crisis. “The Kremlin is making nuclear threats that are completely reckless. At the same time, there are things that the U.S. government can and should do that would reduce the chances of nuclear war,” says Norman Solomon, executive director of the Institute for Public Accuracy and co-founder of RootsAction.org. Meanwhile, Democratic leaders “are simply going along with this autopilot heading towards a precipice of nuclear annihilation globally.” His recent piece for Common Dreams is headlined “Don’t Just Worry About Nuclear War—Do Something to Help Prevent It.”

As we reported in headlines, a spokesperson for President Vladimir Putin said today the four territories of Ukraine Russia recently claimed to have annexed will fall under the protection of Russia’s nuclear arsenal. Russia’s warning came as the United States and NATO launched nuclear war games in the skies above Belgium, the United Kingdom and the North Sea. Russia’s military is set to stage its own annual large-scale nuclear exercise called “Thunder” along Russia’s northwestern coast.

This comes as anti-nuclear activists gathered Friday in dozens of cities in front of congressional offices across the United States, at the U.N. and elsewhere to demand leaders “Defuse Nuclear War.” The protests coincided with the 60th anniversary of the Cuban Missile Crisis.

For more, we’re joined in Berkeley, California, by Norman Solomon, executive director of the Institute for Public Accuracy, co-founder of RootsAction.org. His latest piece for Common Dreams, “Don’t Just Worry About Nuclear War—Do Something to Help Prevent It.”

Why don’t you take us back 60 years? Talk about what unfolded over a month, and then make that connection to what we’re seeing today, Norm.

NORMAN SOLOMON: Well, back in 1962, for 13 days, the world was really on a precipice of nuclear war. There were nuclear missiles that had been put in Cuba from, then, the Soviet Union. And because Khrushchev and Kennedy, the leaders of the two governments, were willing to back down from a confrontation, that’s why we’re able to even be here right now. After that confrontation, at a famous speech at American University, John Kennedy said it was essential for the survival of the world to not back the leader of another nuclear power into a corner.

So, when we see and hear all the rhetoric and the posturing going on from both sides, then we see how on autopilot this insanity is, insanity from both sides. And, of course, and we should certainly make clear, that what the Russian government is doing in Ukraine is reprehensible. There is no justification for it. This is an ongoing war crime from Russia in Ukraine. And they are making — the Kremlin is making nuclear threats that are completely reckless. At the same time, there are things that the U.S. government can and should do that would reduce the chances of nuclear war, not only end this escalation of danger but actually reduce it. Treaties that the U.S. has pulled out of unilaterally — the second President Bush pulled out of the ABM Treaty, Anti-Ballistic Missile Treaty, in 2002; Donald Trump, in 2019, pulled out of the Intermediate-Range Nuclear Forces Treaty. Both of those treaties were very important to reduce the chances of nuclear war, including and especially in Europe.

So, I would sort of sum up that what we’re seeing this week is further escalation. The war games, the nuclear war games that the United States has led, really, beginning yesterday, through NATO is completely irresponsible. These annual — why do it now? This is the worst time to do it. And Russia, we know, according to reports, will follow suit later this month.

So, that’s why RootsAction.org is launching today a campaign where people around the country are contacting their senators, the representatives, and saying, “Speak out against this war game madness that the United States is enabling through NATO, and insist on genuine diplomacy to reach a ceasefire.” This is what we need from constituents.

And I would just sort of sum this up by silence equals death. We know that from AIDS activism going back decades. Right now that is global death, silence and passivity, which is what the U.S. mass media are encouraging, what the political bipartisan establishment is encouraging in the United States. We’re supposed to sit back and watch while these irresponsible 535 people in Congress say virtually nothing about the need to cancel these nuclear war games.

JUAN GONZÁLEZ: Norm, I wanted to ask you about where the Democratic leadership is on this issue. As you mentioned, it was Republican Presidents George Bush and Donald Trump who pulled out of prior treaties that were at least limiting or reducing nuclear weapons. But there’s been virtual silence from even supposed pro-peace members of Congress on where we’re heading right now. And, of course, there are some in the Third World who say this is a European war, just as World War I and World War II were European wars that drew the rest of the world into their conflicts. And I’m wondering what your sense is of where the progressives are in the Democratic Party right now?

The Democratic Party leadership is not providing leadership. They’re simply going along with this autopilot heading towards a precipice, really, of nuclear annihilation globally. Both parties are led by people and are populated in Congress by people who are checked out. They are part of this mentality that we go along to get along with the military-industrial complex. There are billions and billions of dollars being made every month in profits by these major contractors. So, you know, we used to say during the Vietnam War, “War is profitable. Invest your son.” Well, now we could say that nuclear war preparation is profitable. These aerospace industry corporations are making huge killings in preparation for omnicide. So, this is what’s so troubling to so many people.

And I would say parenthetically, but importantly, we have a fascistic Republican Party; they should be defeated in the midterms. At the same time, we have to be very clear: The Democratic Party, like the Republican Party, is led by people who are leading us towards a nuclear precipice. And it’s especially injurious because we’ve got a Democrat in the White House. And as I mentioned, that’s why at RootsAction.org we’re launching this campaign to tell every member of Congress, from constituents, we want you to demand an end to these war games and have genuine negotiations. And that demand should also be directed at the Biden White House. It is ridiculous for progressives to give a pass to Democrats in Congress. And there are so many Democrats, including in the leadership of the Progressive Caucus, that will not speak out against this rush towards the nuclear chicken game, escalating that game by the Biden White House. This is just irresponsible. I’m old enough to remember Senator Wayne Morse. In 1964, I skipped school to go to a hearing. He was a Democrat in the Senate, and he called out the madness from a Democrat in the Oval Office. Where are the senators and representatives in Congress willing and able to do that, even if the president is in their own party?

This is a suicidal approach, taking everybody in, in terms of the risks involved, escalating risk. We started off by talking about the Cuban Missile Crisis. Informed experts say that this is at least as dangerous as that crisis in 1962, arguably much more dangerous. It’s spread out over a longer period of time. So, just because somebody has a “D” after their name, just because they’re a member of the Progressive Caucus, that doesn’t change the fact that their silence is deadly.

And I would just urge all constituents not only go to RootsAction.org and message, within one minute, your senators and representative about the need to call off these war games and have genuine diplomacy, but then call them up. And I’m very sorry to say that in almost all instances you will find that your senators and representatives, in their current mindset, will say, “Oh no, we can’t interfere with NATO.” Well, this is a kind of madness. And if —

AMY GOODMAN: Well, Norm Solomon, what do you —

NORMAN SOLOMON: — those leaders won’t lead, then we have to have leadership —

NORMAN SOLOMON: — from the grassroots.

NORMAN SOLOMON: Well, absolutely, what Putin is doing is reckless and irresponsible and extremely dangerous. That doesn’t change the fact that the United States is also in a game of nuclear chicken. That’s reflected in these NATO nuclear war games going on right now. This is not a zero-sum game where we gain propaganda, the other side loses, or vice versa. There are concrete steps, specific real-world steps, that the United States government could take today to reduce the chances of nuclear war. That clearly is in the interest of everybody in this country and around the world.

NORMAN SOLOMON: Yeah, we could take ICBMs off of hair-trigger alert. We could reinstate treaties that Bush and Trump pulled the U.S. out of unilaterally. This is up to us to do.

AMY GOODMAN: On that note, we want to thank you for being with us, Norman Solomon, with the Institute for Public Accuracy and RootsAction.org. And we’ll link to your piece, “Don’t Just Worry About Nuclear War—Do Something to [Help] Prevent It.” I’m Amy Goodman, with Juan González. Happy birthday again, Juan! 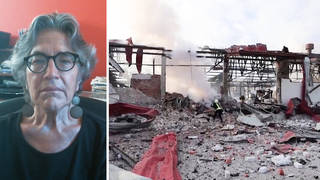