As climate Sahrawi activists in occupied Western Sahara accuse Morocco of greenwashing, the Spanish Film Academy, the Spanish equivalent to the Oscars, has just given its social justice award to the Western Sahara International Film Festival and its film school. We feature our interview at the U.N. climate summit with Mahfud Bechri, who explains how Morocco sells the natural resources and wealth of Western Sahara without the consent of the Sahrawi people as part of an effort to greenwash its military occupation of Western Sahara, and his larger campaign to demand companies end complicity with the occupation. The new social justice award from the Spanish Film Academy recognizes how Spanish support for the Moroccan occupation has led to “a complete media blockade” of the conflict, says María Carrión, executive director of FiSahara, the Western Sahara International Film Festival.

On Thursday, the Spanish Film Academy, which gives the Goya Awards, the Spanish equivalent of the Oscars, gave its social justice award to the Western Sahara International Film Festival and its film school, Abidin Kaid Saleh, known as FiSahara. The festival takes place in the Sahrawi refugee camps in southwestern Algeria, last month celebrated its 17th edition of the film festival. The film school is training the first generation of Sahrawi filmmakers, who are pioneering Sahrawi-made cinema, a brand-new art in Western Sahara. Their short films now tour the world, giving voice to Sahrawi refugee youth who were born in exile and are still awaiting a U.N.-promised referendum on self-determination that would allow them to return to their land, Western Sahara. The festival and the film school operate in one of the world’s remotest and toughest environments in the heart of the Sahara Desert. This is Tiba Chagaf, speaking at the award ceremony in Madrid, director of the FiSahara film festival and film school.

TIBA CHAGAF: [translated] On behalf of the Sahrawi refugees who dedicate our lives to cinema, we are very grateful and truly proud of the men and women who work in the seventh art, who show us daily that those playing fictional roles are far more committed than those who play their real selves.

MARÍA CARRIÓN: [translated] We thank the organizations and the Spanish film community. This festival, born from a shared dream between the Sahrawi people, Spanish filmmakers and solidarity organizations, would not exist without you.

AMY GOODMAN: That was María Carrión. She is the executive director of the Western Sahara International Film Festival, known as FiSahara, also former Democracy Now! producer. She’s joining us from Madrid, Spain.

María, congratulations on this remarkable award that you won this year, the FiSahara film festival and the film school in the refugee camps of Algeria. Talk about the significance of this moment.

MARÍA CARRIÓN: Thank you so much, Amy, for having me on.

It was such an honor to receive the highest award that the Film Academy gives for social justice projects. And it’s very significant because the conflict in Western Sahara is a silenced conflict. It’s a forgotten conflict. And in Spain, our own government has taken the side of Morocco, which occupies Western Sahara, over the people that it once colonized, the Sahrawi people. And as a result also, there’s a complete media blockade. And, for instance, Spanish public TV and radio journalists are banned from going to the camps to cover anything to do with Western Sahara.

So, the fact that the day before we left for the festival we got the news and it was made public that the Film Academy gave us this award forced Spanish media to cover it, because they can’t leave the Film Academy from being covered. It’s a festival that celebrates Sahrawi identity, Sahrawi culture, that decolonizes the Western Sahara culturally, that celebrates what Sahrawi people are about, through film, through music and through community.

MARÍA CARRIÓN: It’s very important that Sahrawi voices find a space at COPs, because they’re so excluded from international events and by the United Nations itself. And so, to have Mahfud and his colleague there to talk about what Morocco is doing — you know, Morocco has built its reputation of being one of the greenest countries in Africa, but it’s doing so at the expense of Sahrawi people because it’s basically powering the occupation through its green projects. So, it’s incredibly significant that they were able to be there and speak to the media and also get to know the activists that were there from around the world, because most people don’t know about Western Sahara.

AMY GOODMAN: Well, I want to thank you very much, María, for joining us. Final thoughts on what you think are the possibilities of the recognition of this occupied territory around the world?

MARÍA CARRIÓN: Well, the possibility of actually getting the voice out that this is a colonization — a decolonization that’s pending, the more projects, like FiSahara and others, that manage to bring the world’s attention to this matter, the more chances there are that governments will be pressured into doing the right thing. The issue is in the hands of the Security Council. The U.N. Security Council, which promised a referendum on self-determination, is not doing so because it’s not getting enough pressure. So I think that if we can all sort of make sure that the world knows about this conflict, through culture, arts, politics and many other ways, the better chance the Sahrawi people have of resolving it and going back to their homeland.

AMY GOODMAN: Well, María Carrión, again, congratulations on this award from the Spanish Film Institute, the equivalent of the Academy that gives out the Oscars. María Carrión is executive director of FiSahara, the Sahara International Film Festival.

As we continue to look at occupied Western Sahara, we turn now to the Sahrawi climate activist Mahfud Bechri. He’s a member of the campaign Western Sahara Is Not for Sale. We’ve just returned from Egypt. I spoke to him last week at the U.N. climate summit in Sharm el-Sheikh.

MAHFUD BECHRI: So, Western Sahara is a non-self-governing territory, considered by the U.N. as pending decolonization. It’s occupied by Morocco since 1975. And since then, Morocco has been, like, perpetuating its military occupation of Western Sahara, where Sahrawis in the occupied territories are suffering from violations of human rights, and the other part of the Sahrawi people are being like refugees in southwest of Algeria in refugee camps. So, despite the different resolutions by the United Nations that call for the right of the Sahrawi people to self-determination, this has not been possible, because Morocco has been blocking this and perpetuating its military occupation, and including now greenwashing this occupation by, like, speaking about green projects in Morocco, including, unfortunately, the occupied territory of Western Sahara.

AMY GOODMAN: So, the Sahrawi campaign has long accused Morocco of theft of its natural resources. Can you talk about what exactly it’s doing? And you say they not only talk about their own projects in Morocco, which you don’t criticize, but they’re talking about occupied lands and using the conference to greenwash this.

AMY GOODMAN: In Western Sahara, phosphates, one of the largest resources in the world, come from Western Sahara. And also, if you can talk about the sand itself?

MAHFUD BECHRI: I mean, Morocco is exporting sand to the Canary Islands in Spain, for example, but to other parts, as well, despite that this is a nonrenewable wealth and that it belongs only to the Sahrawi people. But Morocco is getting a lot of profits from selling out this sand, and also large amounts of fish and phosphate, as we said.

And this is why what we have been campaigning against in Western Sahara Is Not for Sale and other Sahrawi platforms. We’re asking these companies not to be complicit with this military occupation. And we ask them that their participation in exploiting the Western Sahara natural resources is basically participation in this human rights abuses that the Sahrawi people are suffering in the occupied territories.

AMY GOODMAN: So, if you can talk more about, as we wrap up, the goals — for example, even right here, how you highlight the case of the Sahrawi people? How do you want to be represented at these COPs?

MAHFUD BECHRI: Unfortunately, UNFCCC doesn’t give a chair for the Sahrawis themselves. So we have to find a way, our ways, to come through other international organizations to be part of COP.

AMY GOODMAN: And how is, for example, the European Union and other entities and countries dealing with resources that you say are stolen from the Sahrawi people? How successful have you been at getting them to stop buying them?

MAHFUD BECHRI: I think the main — one of the main achievements of Sahrawis have been at the European Court of Justice, different resolutions from 2015 until, last one, September 2021, when it says that the European Union and Morocco could not engage in a commercial agreement that involves Western Sahara, because the European Court of Justice considers the Western Sahara territory as separate and distinct from the Moroccan territory. And this is one of the main achievements.

AMY GOODMAN: Sahrawi climate activist Mahfud Bechri with Western Sahara Is Not for Sale. I spoke to him at the U.N. climate summit in Sharm el-Sheikh, Egypt. To see all of our coverage of the COP in Sharm el-Sheikh, as well as our coverage from Cairo, Egypt, you can go to democracynow.org. Also there, you can watch our documentary, Four Days in Western Sahara: Africa’s Last Colony. 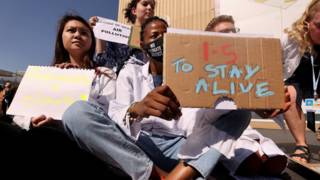