Jurors in Washington, D.C., on Tuesday found Oath Keepers founder Stewart Rhodes guilty of seditious conspiracy for plotting to keep Donald Trump in power after the 2020 election, resulting in the deadly January 6 insurrection at the Capitol. Kelly Meggs, who led the Florida chapter of the Oath Keepers, was also convicted of seditious conspiracy, and three other insurrectionists were found guilty of other felonies. The case marks the first time in nearly three decades that a federal jury has convicted defendants of seditious conspiracy, the crime of conspiring to overthrow, put down or destroy by force the government of the United States. “It’s a win for the Justice Department, and it also sends a message that illegal actions against the government will not go unpunished,” says Kristen Doerer, managing editor of Right Wing Watch. Doerer also discusses other upcoming trials for insurrectionists and how extremist groups have infiltrated military and law enforcement circles.

AMY GOODMAN: For the first time in nearly 30 years, a federal jury has convicted two defendants of seditious conspiracy, the crime of conspiring to overthrow, put down or destroy by force the government of the United States. Jurors in Washington, D.C., Tuesday found Oath Keepers founder Stewart Rhodes guilty of seditious conspiracy for plotting to keep Donald Trump in power after the 2020 election, resulting in the deadly January 6th insurrection at the Capitol. Kelly Meggs, who led the Florida chapter of the Oath Keepers, was also convicted of seditious conspiracy. Three other insurrectionists — Jessica Watkins, Kenneth Harrelson and Thomas Caldwell — were found guilty of other felonies. Attorney General Merrick Garland praised the verdicts Wednesday.

ATTORNEY GENERAL MERRICK GARLAND: During the trial, the government’s evidence showed that almost immediately following the November 2020 election, defendant Stewart Rhodes, the founder and leader of the Oath Keepers, began planning to oppose by force the peaceful transfer of power. With Rhodes, defendants Kelly Meggs, Kenneth Harrelson, Jessica Watkins and Thomas Caldwell communicated and planned to travel to Washington on or around January 6, 2021. On January 6, as the government’s evidence showed, defendants Meggs, Harrelson and Watkins forcefully breached the U.S. Capitol wearing paramilitary gear, while defendants Rhodes and Caldwell remained outside on the Capitol ground coordinating activities.

Last evening, a jury of the defendants’ peers found each of them guilty of serious felony offenses. As the verdict of this case makes clear, the department will work tirelessly to hold accountable those responsible for crimes related to the attack on our democracy on January 6, 2021.

AMY GOODMAN: That’s Attorney General Merrick Garland. The Oath Keepers verdict could give momentum to cases against other major players behind the push to keep Trump in power.

For more, we’re joined by Kristen Doerer. She is managing editor of Right Wing Watch.

Kristen, welcome back to Democracy Now! Talk about the significance of these convictions for seditious conspiracy and what this means.

KRISTEN DOERER: Thank you for having me, Amy.

I mean, as you noted, this is the first time in about 30 years that we’ve had a guilty verdict when it comes to seditious conspiracy. It’s very notable. It’s a win for the Justice Department, and it also sends a message that illegal actions against the government will not go unpunished.

And I would say there are — so, there are also a number of other Oath Keepers who are charged with seditious conspiracy who are going to trial next week, and members of the Proud Boys, another far-right extremist organization, are also being charged with seditious conspiracy, and they go to trial December 12th. This sends a message to those who have pled not guilty that they have a tough trial ahead of them and that a jury has already found similar insurrectionists guilty. And so, it will be interesting to see whether these defendants decide whether they want to cooperate with the federal government and prosecutors or whether they will continue to plead not guilty.

AMY GOODMAN: So, tell us who Oath Keepers are, and specifically its founder, Stewart Rhodes, who was convicted.

KRISTEN DOERER: Right. So, the Oath Keepers is a far-right extremist organization. It’s an anti-government organization fashioned as a militia. It was founded in 2009 by Stewart Rhodes. And the organization is extremely conspiratorial. They believe that the federal government is out to take away Americans’ freedoms and essentially enslave Americans. And they often pitch — this is often the pitch that they give recruits, and they heavily recruit from former law enforcement — current and former law enforcement and military.

AMY GOODMAN: And tell us more about Stewart Rhodes’ background and also Kelly Meggs, who was also convicted of seditious conspiracy, head of the Florida chapter of Oath Keepers.

KRISTEN DOERER: Right. So, Stewart Rhodes is former military. He also was a big Rand Paul fan and — Ron Paul, I should say. And he is also a Yale Law graduate. And he has long been involved in this anti-government extremist movement. And he founded the organization, again, in 2009, and it was kind of in reaction to the election of President Barack Obama.

AMY GOODMAN: And what was he saying then?

Now, that all changed when Trump came into power. They then aligned themselves with Trump and with the Trump administration. And that’s what we saw, you know, ahead of the Capitol insurrection. What we ended up seeing was that there was this alliance that they — and allegiance that they had towards Trump and just wanted to keep Trump in power.

AMY GOODMAN: So, if you can talk about the encrypted message he sent to his [supporters] after Biden was elected, saying, “We aren’t getting through this without a civil war.” And then, in his opening statement, the attorney for Oath Keepers leader Stewart Rhodes said that he and his subordinates had never planned an attack against the government, but instead were waiting for Trump to invoke the Insurrection Act. Explain also what that means.

KRISTEN DOERER: Right. So, first thing I’ll say is that Stewart Rhodes has long been obsessed with this idea of civil war. And so, shortly after — you know, in early November, he was already calling for the potential use of force to keep Trump in power, claiming that he had been illegally — claiming falsely that he had been illegally — had lost the election and was going to be illegally removed from office.

AMY GOODMAN: Earlier this year, a report revealed that more than 370 law enforcement professionals appear to be linked to the Oath Keepers. The Anti-Defamation League found the names among some 38,000 listed as members in a leaked Oath Keepers membership list. They include police chiefs and sheriffs and more than 80 people who were either running for public office or already serving as elected officials. The significance of this?

There is also — the Oath Keepers also have connections to an anti-government sheriff’s organization that sees the sheriff as the supreme power of the land, and they don’t see the federal government — they believe that the sheriffs have more power than the federal government. And so, there are a number of sheriffs who also abide by this extremist ideology. And it should be very concerning. A badge is not a shield to shield you from accountability. And so, we have to make sure that we are holding people accountable and that our law enforcement are abiding by, you know, the government and the rules that we all follow.

AMY GOODMAN: I wanted to ask —

KRISTEN DOERER: And as —

KRISTEN DOERER: Yeah, go ahead. Oh, I was going to say, as far as the elected officials, there are a number of people who are members of the Oath Keepers at the state level and at the local level, and this is because oftentimes these individuals do not have as much scrutiny on them, and so they’re able to hold these membership affiliations. And so, that’s where we see people like Arizona state Senator Wendy Rogers and Arizona state Representative Mark Finchem claim that they are members of the Oath Keepers.

AMY GOODMAN: I wanted to ask you about Donald Trump facing growing condemnation from even Republicans, or certain ones, for hosting the white supremacist Nick Fuentes at his Mar-a-Lago resort in Florida last week. Fuentes is a Holocaust denier, a well-known racist. He dined with the president along with rapper Kanye West, who was suspended from Twitter last month for making antisemitic comments. You noted in a tweet, Kristen, “57 Republican lawmakers were asked if they condemn Trump’s dinner with white nationalist Nick Fuentes. Only 18 responded—and some failed to condemn it.” The significance of this? I mean, nothing loses like failure. Because of the number of people that Trump endorsed in the election that failed, you see a number of Republican senators, like Romney and others, condemning President Trump for hosting this dinner. Trump has yet to apologize for this. Fuentes was at the 2017 Unite the Right rally in Charlottesville, Virginia. Talk about who he is and the meaning of this. The man running for House speaker, Kevin McCarthy, interestingly, has yet to fully condemn Trump for hosting him.

And the other thing I will say is that white nationalists are seeing this lack of denunciation, the refusal to denounce Trump or this dinner, as a tacit endorsement. And we have to be very careful. You know, there is no room, there is no excuse for white nationalism, antisemitism. And it should be — you know, it should be problematic. We should hold every elected official who has a dinner with somebody like that accountable.

AMY GOODMAN: Fuentes was at the riot on January 6th, though he said he didn’t go inside. He wore a VIP badge to Trump’s speech, addressed supporters outside the Capitol during the insurrection, according to the Southern Poverty Law Center, and was subpoenaed by the January 6th committee.

AMY GOODMAN: Well, Kristen Doerer, I want to thank you for being with us, managing editor of Right Wing Watch. We will continue to cover these trials.

Next up, we’re going to look at what the Democrats have passed and are trying to pass in the lame-duck session of Congress before losing their majority in the House. We’ll speak with American Prospect editor David Dayen. Stay with us. 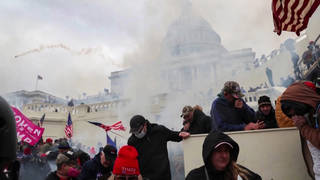