The Biden administration has asked the Supreme Court to temporarily keep in place Title 42 until after December 27. The Trump-era pandemic policy has been used to block over 2 million migrants from seeking asylum in the country. Meanwhile, Supreme Court Chief Justice John Roberts on Monday temporarily blocked the Biden administration from ending Title 42, siding, at least for the moment, with a group of U.S. states with Republican attorneys general who want to keep Title 42 in place. According to Human Rights First, over 13,400 accounts of murder, torture, kidnapping, rape and other violent attacks on migrants and asylum seekers blocked in or expelled to Mexico under Title 42 have been reported since President Biden took office.

AMY GOODMAN: This is Democracy Now!, democracynow.org, The War and Peace Report. I’m Amy Goodman in New York, with Juan González in Chicago.

We turn now to immigration news. The Biden administration has asked the Supreme Court to temporarily keep in place Title 42 until after Christmas. The Trump-era pandemic policy has been used to block over 2 million migrants from seeking asylum in the U.S. In a filing Tuesday, the Biden administration asked the top court to allow it to end the policy, but not until at least December 27th to give border communities more time to prepare for what’s expected to be an increase in the number of people seeking refuge in the United States. On Monday, Supreme Court Chief Justice John Roberts temporarily blocked the Biden administration from ending the Title 42 policy, [siding], at least for the moment, with a group of U.S. states with Republican attorneys general who want to continue to enforce Title 42.

We go now to San Francisco, where we’re joined by Julia Neusner, the research and policy attorney with Human Rights First. She helped write a new report titled “Human Rights Stain, Public Health Farce.” The group has tracked over 13,000 reports of murder, torture, kidnapping, rape and other violent attacks on migrants and asylum seekers blocked in or expelled to Mexico under Title 42 since President Biden took office.

Julia, welcome to Democracy Now! Talk about your findings and the significance of what’s taking place right now at the highest court. What’s going to happen?

JULIA NEUSNER: Good morning, Amy. Thanks so much for having me.

So, we’ve been tracking the Title 42 policy under the Biden administration since its inception. And as you’ve said, we’ve now tracked 13,480 kidnappings and other violent attacks against migrants and asylum seekers stranded in Mexico or expelled under Title 42. And that number is absolutely staggering, and it continues to climb for as long as the policy is in progress. We know that migrants and asylum seekers who are stranded at the border are specifically targeted by organized criminal groups, and even police and state actors, for extortion, kidnappings and other attacks. And this policy has just made it so much worse.

And so, as you explained, the Supreme Court has stayed the termination of the policy, and the U.S. government yesterday submitted its response opposing the stay but requesting additional days to be able to implement — to be able to prepare for the lifting of Title 42. So, we don’t know how the court is going to decide on that, but the government did indicate that it has new policies that it’s planning to implement in preparation.

JUAN GONZÁLEZ: And, Julia, could you talk about the erroneous view that many Americans have that Title 42 has helped to reduce the migrant — the asylum seekers and migrant flows from along our southern border?

JULIA NEUSNER: Yeah. Title 42 has absolutely not had that effect at the southern border. What it’s done is it’s prevented people from seeking asylum at ports of entry, which is their legal right. So, people previously, under U.S. and international law, were able to present themselves at a port of entry, and if they request protection, they’d be taken into U.S. custody and go through the asylum process. But Title 42 closes off that avenue to seek protection, so it’s forced people to cross between ports of entry and kept many just trapped at the border.

But we’re seeing the numbers of people crossing between ports of entry are much, much, much higher than they were before the policy was implemented. That’s because the same forces that are forcing people to leave their homes — organized crime, climate disasters, political persecution — many of the people arriving are Venezuelan, Nicaraguan, fleeing authoritarian governments. And in many cases, those issues have gotten worse over the pandemic.

So people are still coming. And this policy and any attempt at a deterrent, at using cruelty to deter people from coming, has been completely ineffective. And it’s counterproductive, because it encourages repeat entries. That’s why the statistics we hear from Border Patrol and CBP about crossings are very inflated, because many of the people who they count as individual encounters are in fact people who have attempted to cross many times and, because of this policy, have been expelled right back to Mexico.

And another consequence of these rising crossings between ports of entry that Title 42 has forced is that people are — these crossings are extremely dangerous. People need to walk through deserts or make their way across very, very dangerous rivers, often at the mercy of organized criminal groups who control border crossings. And we have seen more deaths of people crossing the border this year than any year since the government started tracking the deaths in 1998. So, it’s been a total disaster.

JUAN GONZÁLEZ: And in terms of the legal situation with Title 42, with Chief Justice Roberts issuing this order, what happens now? Does it go to the full Supreme Court, or how do you see the legal unraveling or the resolution of this conflict?

JULIA NEUSNER: So, the states that sought to intervene in this case, claiming that the government was inadequately representing their interests — again, this was a case initially brought by plaintiffs represented by the ACLU who were impacted by Title 42, and the government has defended the policy. And a district court found that the policy was illegal, and ordered that it end this month. And the states sought to intervene. They were denied by the circuit court and by the appellate court, because their request to intervene was made after final judgment. It was very late. So, then, in kind of a last-ditch effort, they went to the Supreme Court and sought this stay and were — and Justice Roberts issued this administrative stay pending briefing by the parties.

So, the government, as I mentioned earlier, has submitted its brief opposing the request of the states who are seeking to intervene. The states have asked that the court stay the policy, pending its decision on the question of whether the states should be allowed to intervene. And the government has asked that that stay be lifted, but with time to implement some new policies and prepare for the lifting of Title 42. So, they’ve asked until at least December 27th for — before that stay will be lifted. So —

AMY GOODMAN: And we’re going to follow that, of course. Julia Neusner, research and policy attorney with Human Rights First. 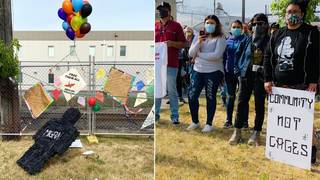