Ukraine is demanding an immediate ceasefire and for all Russian troops to leave the country as they report more than 350 Ukrainian civilians have so far been killed in President Putin’s invasion, which entered its fifth day Monday. The United Nations is also reporting more than 500,000 people have fled Ukraine and another 100,000 are internally displaced. This all comes as the Russian military has so far failed in its attempts to seize Kyiv and other large Ukrainian cites despite the capital remaining surrounded by Russian troops. We go to Kyiv to speak with Olena Shevchenko, a Ukrainian human rights and LGBTQ activist, who describes growing opposition to Russian forces and solidarity within her country. “Nobody in Ukraine is ready to live under occupation of Russia,” says Shevchenko, who also says that LGBTQ-identifying people would be “the first targets for the Russian regime.”

Russia’s invasion of Ukraine has entered its fifth day. Russian and Ukrainian negotiators are meeting on the Belarus border. Ukraine is demanding an immediate ceasefire and for all Russian troops to leave Ukraine. Ukraine says more than 350 civilians have been killed since Russia invaded last week. According to the United Nations, more than half a million people, 500,000 people, have fled Ukraine, mainly to Poland. Another 100,000 are displaced inside Ukraine. On the military front, Russia has so far failed in its attempts to seize Kyiv and other large Ukrainian cities, but Kyiv remains surrounded by Russian troops. Amnesty International has accused Russia of using cluster bombs inside Ukraine. Amnesty says three civilians, including a child, were killed on Friday when cluster munitions hit a preschool where people had taken shelter. Ukraine has claimed over 5,000 Russian troops have been killed so far, but there is no way to confirm that number.

Opposition to Putin’s invasion appears to be growing in Russia as the value of the ruble plunged. As many as 6,000 Russians have been arrested since Thursday taking part in antiwar demonstrations. One Russian speaking out against the war is Lisa Peskova. She’s the daughter of Putin’s spokesperson, Dmitry Peskov. On Friday, she posted a message that read “No to war” on her Telegram account, but the post was quickly deleted. Meanwhile, peace rallies were held across the globe this weekend. In Berlin, over 100,000 people marched; Greenpeace put the crowd at about 500,000. Peace protests were also held in New York, in London, Madrid, Amsterdam, Stockholm, Tel Aviv, Tokyo and other cities.

We go now to Kyiv, where we’re joined by Olena Shevchenko. She’s a Ukrainian human rights defender and LGBTI activist.

Welcome to Democracy Now! It’s great to have you with us, Olena. As you speak to us from the capital of Ukraine, that sounds like it’s beginning to be surrounded by a column of Russian tanks, yet the fighting inside by Ukrainians, men and women, seems also to be intense, can you describe the scene on the ground?

OLENA SHEVCHENKO: Yeah. Thank you so much for asking.

Well, it’s almost true, like, yes, we feel like we are surrounded by Russian troops in Kyiv. I am in Kyiv now in the — almost in the center of Kyiv. And I had a possibility to walk around just few hours ago. So, what I saw, that’s a huge mobilization inside the city. So, everybody’s there, I mean, people on the streets, women, men, who are ready to fight, who are ready to surround Russians and just to stop them on the streets, because, you know, what is the impact of this aggression of Putin on the Ukraine, it seems like it unites us even more than it was before. Like, everybody is trying to support, support each other, like sharing food, sharing everything they have. And they’re also ready to take weapons and to go to the streets and just to stop Russian tanks on the streets. And it’s not only about Kyiv. That’s about all the cities around Ukraine, because that’s not possible now for them to win in this fight, because nobody in Ukraine is ready to live under occupation of Russia.

AMY GOODMAN: Can you talk about what the plans are for Kyiv? Did you expect to see this level of resistance? And what do you hope there will come out of these talks on the Belarus border? I mean, at the same time, you have Belarus talking about sending Belarusian troops along with Russian troops into your country.

OLENA SHEVCHENKO: Yes, of course, they are trying to frighten Ukrainians. And everybody, I think, in the world understand that this is not the equal forces — I mean, Russians and Ukrainians, and now also Belarusians. Of course, everybody is scared around the world, as well. That’s why we don’t have, you know, any direct support from the world, because everybody understand that Putin has this button and the nuclear weapon is ready. We all hear this information.

So, this is a very important moment, I guess, in the world history. So, basically, what will be next will show what kind of future we all will have in the nearest times, because, you know, this threat from Russia, from Putin — not all Russians; we all know that many people in Russia are against that. But it seems like this is geopolitical fight, and Ukraine, unfortunately, in the center of that, because if it will be a threat of the nuclear weapon to be used, it will be the Third World War, and everybody understand that. So, this is why we all hope that something will be decided today. But Ukraine is not ready to go to those ultimatums which Putin announced before. So we are not ready to be like he seen us. We are ready to be independent country, like we are, and we are not ready to be occupied or whatever he wants.

AMY GOODMAN: Olena, what does the antiwar protests around the world mean to you, these massive protests in Berlin? In Russia, the reports are 6,000 antiwar protesters have been arrested. You have the daughter of Putin’s spokesperson, Petrov [sic], Lisa Petrova [sic] — Peskov, rather, Lisa Peskova, posting on her Telegram account “No to war,” and then it’s quickly removed. What does this mean to you?

OLENA SHEVCHENKO: It just showed us that, of course, many people in the world, and even many people in Russia, is openly against this war, this aggression, and against this Putin’s, you know, everything, like against him as a president of Russia. But we all know that, you know, during the long time, the long period of time in Russia, they tried to do something with the protests to change his presidency on the elections. But we all saw that it was impossible. So, now, of course, we all understand they are also threatened there in Russia.

But it’s nothing. Believe me, I mean, to be beaten or to be taken to the jail for the protests, it’s nothing if you will compare it with this bombing every hour, like in Kyiv now. We all live in this situation with humanitarian crisis. We all live on this line between life and death. So it’s nothing if you compare it to that kind of life. We even don’t know if it will be the bombing tomorrow with the nuclear weapon. Can you imagine that? So, basically, I think the international community and Russia, people in Russia, that’s the real time now to do something more.

AMY GOODMAN: Olena, do you plan to leave Kyiv? Are you going to try to make it to somewhere like Poland?

OLENA SHEVCHENKO: No, no, I don’t have such plans, because, you know, we just — it’s the decision for everybody. Like, you need to make this decision: You are leaving, or you are staying. I think that it’s most important now for us, for me as a human rights activist, to stay here and to support others, especially those who are trying now to leave, to relocate to the western regions and to Poland. So that’s what we do now. And —

AMY GOODMAN: And what are your thoughts on the protests around the world, many of them calling — there was a major online rally this weekend — “no to war” and also “no to NATO expansion”? How do you think that issue has played into what Putin has done?

OLENA SHEVCHENKO: It’s a good question for us, because everybody knows that the first point for Putin is no to NATO expansion. But I think — personally, I think this is just, you know, this case just to justify his aggression towards Ukraine, because Ukraine can make independent decision about to be in NATO or no. And this should be our decision, not Putin’s decision. That’s the first point.

Another thing is, of course, everybody understands this is a fight between Russia and Western world, and it’s not only about NATO, because what is Putin’s saying? He is trying to impose this Russian world, Russian traditional values, on the — you know, to show, like, this is a good thing to believe in. So, Western values, for him, is the threat to their national security. So, that is why I am talking it’s not just about Ukraine. That’s the global, global geopolitical war.

AMY GOODMAN: And finally, how has your LGBTI activism prepared you for this? And, I mean, there’s so much LGBTQ criticism of Putin and how he deals with the LGBTQ community. But you have so much that you’re fighting against also in Ukraine when it comes to fascist groups, neo-Nazi groups. How does this bear on what’s happening now in the midst of the bombing of your country?

OLENA SHEVCHENKO: Well, talking about the LGBTQI activists, of course, we understand, like, we will be the first targets for the Russian regime, because that’s what’s happening. That’s what happened in Russia. That’s what’s happened during occupation of the Donbas. Then we had a number of those who escaped from those regions, because people said they were hunted for the LGBTQI people in those regions. Why? Well, because, like, in Putin’s doctrine, in his idea of the Russian world, there is no place to marginalized communities. There is no place to others. So, basically, of course, we will be the first targets. That’s why we are thinking about how we can help people to cross the border now, for those who decided to leave already. And we basically don’t know what will happen with us afterwards or during this crisis or during the occupation. Nobody knows. But we are trying to make our best to survive and to fight more, because, like, this is a decision. This is the personal decision: to leave or to stay and to fight.

AMY GOODMAN: Olena Shevchenko, we want to thank you so much for being with us, Ukrainian human rights defender, LGBTQI activist, joining us from Ukraine’s capital, from Kyiv. 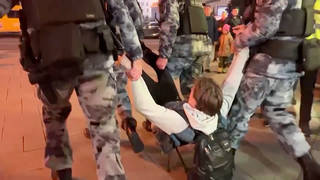