Attack on Maternity Ward Is a War Crime: David Miliband on Russia’s Bombing of Mariupol

Russian forces reportedly killed at least three people when they bombed a children’s hospital in the Ukrainian city of Mariupol on Wednesday, shelling a humanitarian corridor and breaking a ceasefire deal that was meant to allow residents to flee. The actions constitute a violation of international humanitarian law and, therefore, a potential war crime, says David Miliband of the International Rescue Committee. The mayor of Mariupol says there have been over 1,200 civilian deaths since the start of the war. Russian forces have also cut off the city’s water supply and electricity. “This is a strangulation of the city,” says Miliband.

As we continue to cover Russia’s invasion of Ukraine, we turn now to look closer at the escalating humanitarian and refugee crisis, the United Nations estimating 2.2 million people have fled Ukraine over the past two weeks. Earlier today, the foreign ministers of Russia and Ukraine met in Turkey but failed to make progress towards a ceasefire. The talks came a day after Ukraine accused Russia of bombing a children’s hospital and maternity ward in the besieged city of Mariupol.

We’re joined now by David Miliband, president and CEO of the International Rescue Committee, former foreign secretary of the United Kingdom, speaking to us from New York.

David, can you start off by talking about Mariupol? Your organization, International Rescue Committee, works throughout Ukraine. What do you understand is happening right now? As we went to air, it was being bombed again.

DAVID MILIBAND: Yes, I think we’ve got a classic siege situation compounded by indiscriminate use of missile and bombing tactics of civilian infrastructure, including the hospital that was bombed yesterday, which is obviously completely contrary to international law. I think it’s also important to remind people that the water supplies have also been cut off, and the electricity, as well. So this is a strangulation of the city. It seems that the Russian army is trying to make an example of this city. It’s a punishment campaign that is going on, a collective punishment campaign. That was tried in Aleppo and was tried in Grozny. And when people talk about flattening a city, that’s what you’re seeing at the moment.

And obviously there are three main fronts to the humanitarian crisis that you referred to. One is besieged cities. The second is people on the run from those cities. And then the third is the refugees who have made it to safety in Europe and are now being processed and hopefully given some haven in what are effectively some of the world’s wealthiest rich countries.

NERMEEN SHAIKH: David, can you talk about the difficulties that your organization and Ukrainian people trying to flee have encountered in terms of safe passage, humanitarian corridors, where the Russians have not abided by a ceasefire to enable people to leave?

DAVID MILIBAND: Well, there’s a lot of rhetoric about so-called “humanitarian corridors.” I think it’s always important to put them in quotation marks, because the question is: A corridor to where, for whom? And what we have seen is that there’s been some abuse of these so-called corridors, where people have been on their way out and then been hit. Some absolutely appalling pictures that were put out yesterday, including of a partner of the — a partner organization of USAID, the United States development agency, a 32-year-old woman and her family, her mother — she was shepherding her mother out, and she was killed.

Now, I think it’s very, very important to also remind people that access to humanitarian aid — in other words, corridors in for medical supplies, for food — that is not just a moral right, but that is a legal right under international humanitarian law, under the Geneva Conventions, under international law. And so what we’re seeing across Ukraine is the latest evidence of what I call the age of impunity — in other words, the willingness of army commanders and military commanders and their political leaders to abuse their power in such a way that they cross the line that is marking what is legal and what is illegal. And we’re seeing that in technicolor across Ukraine today.

NERMEEN SHAIKH: Do you think, David, that these attacks on civilians constitute war crimes?

DAVID MILIBAND: Well, I’m not a lawyer, but prima facie they do. If you’re attacking a hospital of women, pregnant women, that is a war crime. Now, the essential legal definition of a war crime is serious abuses and violations of international law. That’s something that the authorities will need to investigate. I say “authorities,” plural, because the International Criminal Court has established an inquiry, which is good, but neither Russia nor Ukraine are full signatories to the ICC, the International Criminal Court. But they will produce evidence. There is also the potential for international prosecutions under something called universal jurisdiction, which is a global legal standard that allows people to be tried, if necessary, in absentia. And so, I think it’s very, very important the documentary evidence is held onto. But clearly there’s prima facie grounds for believing that war crimes are being committed, and that’s why the ICC, the International Criminal Court, has announced its inquiry.

AMY GOODMAN: Earlier this week, we spoke to Congresswoman Ilhan Omar, the first African refugee to become a U.S. congressmember. She talked about the refugee crisis.

REP. ILHAN OMAR: Yeah, I mean, it’s heartwarming to see the incredible support from European countries, the United States and everyone around the world that the Ukrainians are experiencing — right? — as they flee war. Everyone fleeing war deserves this level of compassion and hospitality. Some of the countries that are welcoming Ukraine now are the same countries that have been stoking fear against refugees who were fleeing the Syrian war, the war in Libya and many other wars around the world.

AMY GOODMAN: David Miliband, do you think how Ukrainians are being treated — I mean, now the EU took this unprecedented decision to grant newly arrived Ukrainians temporary protected status, giving them temporary residence permits for access to medical treatment, employment, education in all the 27 countries of the EU. If you could comment on that? This is a model of how refugees should be treated, but also the difficulty Ukrainians are having getting into the U.K., your country.

DAVID MILIBAND: Yes, Congresswoman Omar makes a very important point that the unity of the EU 27 is very striking, it’s very welcome, but, unfortunately, it’s a contrast with the disunity that continues to exist about its global commitment to refugee resettlement and the embrace of people who are fleeing from war. I think it’s very important that we applaud the three-year temporary directive that’s been enunciated by the EU. And we call on all other European states, whether or not they’re in the EU, including the U.K., including Norway, including Switzerland, to match it.

I’m really ashamed that the U.K. has not stepped up, effectively. There’s been some new announcements this morning, but, frankly, when people are fleeing a war, you want to let them in first and do the paperwork second, not the other way around. And I think the U.K. has got some catching up to do when it comes to meeting the standards that should be expected. And they’re, frankly, expected by British people. There’s remarkable outpouring of support from British people, and the British government has been far behind that. But I think it’s very, very important that we use this as a moment to reset the understanding of who a refugee is, what they are fleeing from, and the treatment that they deserve until their countries are able to welcome them back.

AMY GOODMAN: David Miliband, we just have 20 seconds, but you were the foreign secretary of the United Kingdom. How do you see this war ending?

DAVID MILIBAND: I’m afraid it’s far easier to see how this will go on than it will end. But in the end, this is now a trial of strength, and I’m afraid in the final two seconds, I can’t yet predict how it’s going to end up.

AMY GOODMAN: Well, I thank you so much for being with us, David Miliband, president and CEO of the International Rescue Committee, former foreign secretary of the United Kingdom.

That does it for our broadcast. A very special thanks to the amazing team that put this broadcast together. Democracy Now! is produced with Mike Burke, Renée Feltz, Messiah Rhodes, María Taracena. I’m Amy Goodman, with Nermeen Shaikh. Stay safe. 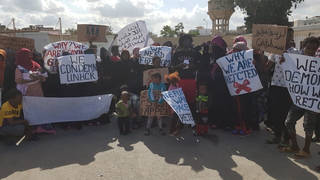