A NATO No-Fly Zone in Ukraine Would Be “Direct Involvement in the War Against Russia,” Experts Warn

Ukrainian President Volodymyr Zelensky continues to demand the U.S. and NATO allies impose a no-fly zone over Ukraine, an idea that President Biden has rejected even as a growing number of Republicans embrace the idea despite the risk it could draw the U.S. directly into the war against Russia and possibly spark a nuclear confrontation. Stephen Wertheim, a senior fellow in the American Statecraft Program at the Carnegie Endowment for International Peace, co-authored an open letter signed by foreign policy experts who oppose a no-fly zone over Ukraine. It urges leaders to continue diplomatic and economic measures to end the conflict. “As you start thinking about how a no-fly zone would actually unfold, it becomes very obvious this would be direct involvement in the war against Russia, and rather than end the war, a no-fly zone would enlarge the war and escalate the war,” says Wertheim.

The Ukrainian President Volodymyr Zelensky is giving a virtual address to both chambers of the U.S. Congress today. He is expected to repeat his call for NATO to impose a no-fly zone. President Biden has so far rejected his request, but some in Congress and former officials have embraced the idea.

Meanwhile, a group of foreign policy experts have signed on to an open letter opposing a no-fly zone. The letter was co-written by our next guest, Stephen Wertheim. He’s senior fellow in the American Statecraft Program at the Carnegie Endowment for International Peace and the author of the book Tomorrow, the World: The Birth of U.S. Global Supremacy.

Stephen, welcome back to Democracy Now! It’s great to have you with us. Talk about what it means to impose a no-fly zone and why you’re opposed, what this letter is all about.

STEPHEN WERTHEIM: Well, a no-fly zone strikes many people as a humanitarian measure or a technical measure. Our experience with no-fly zones comes from the last three decades, in which a small number of no-fly zones have been imposed against much weaker enemies than Russia. But what it means is that the United States and NATO forces would commit to shoot down enemy planes, any enemy plane that enters the zone. It’s quite clear Russia would not voluntarily comply with our verbal declaration of a no-fly zone, so we’d have to shoot those planes down. And to do that, we’d have to patrol the area with our own planes to gain supremacy in the skies over Ukraine. And to do that safely, we would have to destroy the enemy’s air defense systems on the ground, as well. Many of those are located in Belarus, and some potentially may be located in Russia. Indeed, Russians could fire at U.S. and NATO forces from Russia.

And then the question would become: Would we go to war, go to war and exchange fire with Russians who are located inside Russian territory? So, as you start thinking about how a no-fly zone would actually unfold, it becomes very obvious this would be direct involvement in the war against Russia. And rather than end the war, a no-fly zone would enlarge the war and escalate the war. And that’s why the Biden administration has, rightly, been very clear throughout this conflict that a no-fly zone would be escalatory and is not something that it wants to do.

AMY GOODMAN: And we’re talking about a war between nuclear powers, and what Putin has said is clearly suggesting people should be very careful about moving forward — threatening, in fact.

STEPHEN WERTHEIM: And as President Obama himself noted as he prepared to leave office, that with respect to Ukraine, Russia would have escalation dominance, meaning because the value of Ukraine to Russia is so much higher than it is to the West, that Putin would be prepared to go much further. This would be a kind of existential struggle for him. And now it is even more so than when he initially invaded, given the sanctions that have been imposed on Russia.

AMY GOODMAN: And can you —

STEPHEN WERTHEIM: So, he may resort to nuclear use.

AMY GOODMAN: Can you address the suggestion of a, quote-unquote, “limited” no-fly zone?

STEPHEN WERTHEIM: It’s hard to know what that would mean exactly. One has to specify where a limited no-fly zone would be imposed. But, again, there is no really limited no-fly zone. A no-fly zone means a commitment not just to declare something, but to enforce it, by making sure that Russian planes cannot fly within that zone. And so, it would clearly be viewed as an act of war and an escalation by Russia. Russia wouldn’t be wrong to view it that way. And in every case, the basically three cases in which no-fly zones have been imposed in recent decades — and again, imposed against enemies much, much weaker than Russia — the mission has expanded.

For example, if we impose a no-fly zone, whether it’s called limited or not, and our pilots actually do gain superiority in the air, and they’re watching Russians inflict terrible violence on Ukrainians below them, then we’re faced with a question: Should we actually attack Russian forces on the ground? And if not, what was the point of establishing a no-fly zone, if it’s making little difference in the war itself? So, a no-fly zone would not, in and of itself, do very much to alleviate the suffering that Ukrainians are experiencing at the hands of Russian aggression. What it really would be is an intermediate step toward a much wider war.

AMY GOODMAN: So, I wanted to ask you about the state of negotiations to end this war. The Ukrainian President Zelensky suggested earlier today that Russian demands are becoming more realistic.

PRESIDENT VOLODYMYR ZELENSKY: [translated] Everyone should work, including our representatives, our delegation, for negotiations with the Russian Federation. It is difficult but important, as any war ends with an agreement. The meetings continue, and I am informed the positions during the negotiations already sound more realistic. But time is still needed for the decisions to be in the interests of Ukraine.

AMY GOODMAN: Zelensky’s remarks came a day after he acknowledged he doesn’t expect Ukraine to join NATO anytime soon, which is very significant. And during a news conference yesterday, The Intercept’s Ryan Grim asked White House Press Secretary Jen Psaki what the U.S. is doing to advance peace negotiations and whether the U.S. would lift its sanctions on Russia if it reached a peace deal with Ukraine. This is just a small part of what she said.

RYAN GRIM: Aside from the request for weapons, President Zelensky has also requested that the U.S. be more involved in negotiations toward a peaceful resolution to the war. What is the U.S. doing to push those negotiations forward?

PRESS SECRETARY JEN PSAKI: Well, one of the steps we’ve taken, a significant one, is to be the largest provider of military and humanitarian and economic assistance in the world, to put them in a greater position of strength as they go into these negotiations.

STEPHEN WERTHEIM: Well, it is encouraging that President Zelensky is now being even more explicit, continuing a string of remarks over the past week or so in which he has expressed a real openness to making a settlement to the war, suggesting that he’s open to committing to neutrality for Ukraine with respect to NATO. And that has been a core demand of Russia, a consistent demand going back a long time.

And there are also some encouraging words coming out of the Biden administration, as well. Secretary of State Tony Blinken just recently suggested that the sanctions that have been imposed on Russia were not intended to be permanent. And what that signals is perhaps a willingness on the part of the United States to drop some of the most draconian sanctions on Russia if that becomes necessary in order to secure a peace settlement that the legitimate government of Ukraine, led by Zelensky, would desire. And so, that’s the key. If the Zelensky government believes it’s in the interest of Ukraine to stop the bloodshed, accept what will surely be some painful concessions, but nevertheless preserve the sovereignty and independence of Ukraine in a peaceful way, what I think will be important from the United States and its allies is to be able to be part of those negotiations and make certain concessions with respect to sanctions, that would be surely necessary to reach a peaceful resolution to the war.

AMY GOODMAN: One of —

STEPHEN WERTHEIM: Whether we’re at the point where in fact Russia is willing to make an agreement, that is hard to judge. But we may get there in the coming weeks.

AMY GOODMAN: One of the key demands from Russia so far has been no intermediate- or shorter-range missiles deployed close enough to hit the territory of the other side. Explain this. And we just have 30 seconds.

STEPHEN WERTHEIM: Actually, prior to Russia’s full-scale invasion several weeks ago, it seemed as though the United States and Russia were making some progress in diplomacy on issues like the one you mentioned, on arms control agreements, which would involve reciprocal measures whereby NATO forces in the east of NATO and Russia would both seek to revive the kinds of limitations on their armaments, that were built up actually during the Cold War, were built up a little bit after the Cold War, but have atrophied over the last several decades. So this is also —

AMY GOODMAN: We just have 10 seconds.

STEPHEN WERTHEIM: This is also something that could be part of an ultimate peace agreement.

AMY GOODMAN: Well, Stephen Wertheim, we’re going to do Part 2 of our conversation with you and post it online at democracynow.org. Stephen Wertheim is senior fellow at the American Statecraft Program at the Carnegie Endowment for International Peace. He’s a visiting fellow at Yale Law School and author of the book Tomorrow, the World: The Birth of U.S. Global Supremacy.

That does it for our show. Democracy Now! is produced with a remarkable group of people. I’m Amy Goodman. Stay safe. 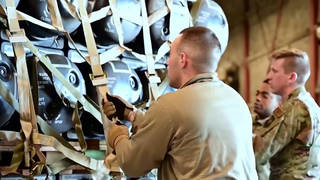