Ukrainian Pacifist in Kyiv: All Sides Have Fueled the War. Only Comprehensive Peace Talks Can End It

Hundreds of nonviolent antiwar protesters gathered in the Ukrainian city of Kherson on Monday to oppose Russian occupation of the city and object to involuntary military service. Russian forces used stun grenades and machine gun fire to disperse the crowd. Meanwhile, President Biden is expected to travel to a NATO summit this week in Brussels, where Western allies are preparing to discuss the response if Russia turns to using nuclear weapons and other weapons of mass destruction. Both sides of the war must come together and deescalate, says Kyiv-based Ukrainian peace activist Yurii Sheliazhenko. “What we need is not escalation of conflict with more weapons, more sanctions, more hatred toward Russia and China, but of course, instead of that, we need comprehensive peace talks.”

We end today’s show in Kyiv, Ukraine, where we’re joined by Yurii Sheliazhenko. He’s the executive secretary of the Ukrainian Pacifist Movement and a board member of the European Bureau for Conscientious Objection. Yurii is also a member of the board of directors at World BEYOND War and a research associate at KROK University in Kyiv, Ukraine. He’s been closely following reports from the occupied southern Ukraine city of Kherson, where Russian forces used stun grenades and machine gun fire to disperse a crowd of hundreds of people who gathered Monday to protest the Russian occupation.

Yurii, welcome back to Democracy Now! You are still in Kyiv. Can you talk about what’s happening now and what you’re calling for? And I’m particularly interested, for example, in what seems to be an almost unanimous call for a no-fly zone so Russia can’t pummel the cities, but the West is deeply concerned that enforcing a no-fly zone, meaning shooting down Russian planes, will lead to a nuclear war, and what your position is on this.

YURII SHELIAZHENKO: Thank you, Amy, and greetings to all peace-loving people around the world.

Of course, a no-fly zone is a militarized response to current crisis. And what we need is not escalation of conflict with more weapons, more sanctions, more hatred toward Russia and China, but, of course, instead of that, we needed comprehensive peace talks. And, you know, United States is not a noninvolvement party of this conflict. On the contrary, this conflict is beyond Ukraine. It has two tracks: a conflict between the West and the East and conflict between Russia and Ukraine. Expansion of NATO was previous to violent power grabs in Kyiv by — sponsored by the West, Ukrainian nationalists in 2014 and violent power grabs in Crimea and Donbas by Russian nationalists and Russian military forces the same year. So, 2014, it was, of course, a year of starting this violent conflict between — from the start, between government and between separatists. And then, after a major battle, after conclusion of peace deal, Minsk agreements, which both sides are not complied with, and we see objective reports of OSCE about ceasefire violations on both sides. And these ceasefire violations were escalated before Russian invasion, this illegal Russian invasion to Ukraine. And the whole problem is that a peaceful solution on that time, internationally approved by United Nations Security Council, was not complied with. And now we see that instead of Biden, Zelensky, Putin, Xi Jinping sit at one negotiation table, discuss how to transform this world for better, to remove any hegemony and to establish harmony — instead of that, we have this politics of threats from United States to Russia, from United States to China, these demands of warmongering Ukrainian civil society to establish this no-fly zone.

And by the way, it is incredible hatred towards Russian in Ukraine, and this hatred is spreading around the world, not only to warmongering regime but for Russian people, too. But we see that Russian people, many of them, are against this war. And, you know, I would tribute — I am thankful to all courageous people who resist nonviolently to war and warmongering, those people who protested against the Russian occupation of Ukrainian city of Kherson. And the army, invading army, shooted at them. It is a shame.

JUAN GONZÁLEZ: Yurii, I just wanted to ask you, because we have only a few minutes left — you talk about the direct involvement of the U.S. and NATO already. There’s been very little reporting, not just on the issue of the weapons being supplied by the West to Ukraine, but also, clearly, by the actual satellite surveillance data that the Ukrainian army is most likely receiving from the West. And my guess is, years from now, we will learn that drone attacks on Russian forces were being directed remotely from American bases in places like Nevada, or even that there are already significant number of CIA and special operation forces inside Ukraine. As you say, there are nationalists on all sides, on Russia, in the U.S. and in Ukraine, who have fueled this crisis right now. I’m wondering your sense of what the resistance is among the Ukrainian people to this war. How widespread has it grown?

YURII SHELIAZHENKO: You know, this escalation is the result of a push from these military contractors. We know that American Defense Secretary Lloyd Austin is linked to Raytheon. He was on the board of directors. And we know that Raytheon stocks have 6% growth on New York Stock Exchange. And they supply Stinger missiles to Ukraine, producer of Javelin missiles, [inaudible], have a growth of 38%. And, of course, we have this Lockheed Martin. They supply F-35 fighter jets. They have a growth of 14%. And they profit from war, and they push for war, and they even hope to profit more from bloodshed, from destruction, and somehow do not escalate for the scale of nuclear war.

And people should push to government to negotiate instead of fight. There are a lot of actions against warmongering going ahead in the United States and Europe. You can find announcement at the WorldBeyondWar.org website under the banner, “Russia Out of Ukraine. NATO Out of Existence.” CodePink continues to petition President Biden and the United States Congress for negotiation instead of escalation. Also, it will be global mobilization, “Stop Lockheed Martin,” on April 28. Coalition No to NATO announced that they are marching in June 2022 for this and against the NATO summit in Madrid. In Italy, Movimento Nonviolento launched conscientious objection campaign in solidarity with conscientious objectors, draft evaders, Russian and Ukrainian deserters. In Europe, Europe for Peace campaign said that European nonviolent pacifists issue ultimatum to Putin and Zelensky: Stop the war immediately, or people will organize caravans of nonviolent pacifists from all over Europe, using all possible means to travel to the conflict zones unarmed to act as peacekeepers among the combatants. As for protesting in Ukraine, for example, we have this shameful —

YURII SHELIAZHENKO: Yeah, I would like to say that a petition entitled “Allow men aged from 18 to 60 without military experience to leave Ukraine,” on OpenPetition.eu, gathered 59,000 of signatures.

AMY GOODMAN: Yurii, we’re going to have to leave it there, but I thank you so much for being with us. Yurii Sheliazhenko, executive secretary of the Ukrainian Pacifist Movement.

And this news just in: Russian opposition leader Alexei Navalny has just been sentenced to an additional nine years in prison.

War as Crime of Aggression: Reed Brody on Prosecuting Putin & Probing Western Leaders for Other Wars 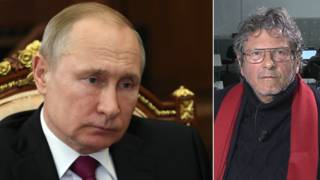 War as Crime of Aggression: Reed Brody on Prosecuting Putin & Probing Western Leaders for Other Wars