The Duke and Duchess of Cambridge have just finished a weeklong visit to former British colonies in the Caribbean. Their trip comes after Barbados cut ties to the monarchy and became a republic last year. During the so-called charm offensive to the British Commonwealth countries, the royals were met with protests calling for reparations for slavery. We speak with senior Jamaican Member of Parliament Lisa Hanna, who met with the royals during their visit and has critiqued the couple for not putting forward an action plan to redress the crimes of slavery committed by the British monarchy against the Jamaican people, adding that any British “condemnation [of slavery] without action is hollow.” Hanna outlines how Jamaica could swiftly break ties with the monarchy through referendum or a change in the Constitution.

StorySep 19, 2022“Racism Is as British as a Cup of Tea”: Kehinde Andrews Says Many Black Britons Don’t Mourn the Queen

This weekend, the Duke and Duchess of Cambridge finished a weeklong visit to former British colonies in the Caribbean: Belize, Jamaica and the Bahamas. The trip comes after Barbados cut ties to the monarchy and became a republic last year. During the so-called charm offensive to the British Commonwealth countries, the royals were met with protests calling for reparations for slavery. A government committee in the Bahamas urged the royals to issue a, quote, “full and formal apology for their crimes against humanity.” In one meeting, Jamaica’s Prime Minister Andrew Holness told Prince William his country would be, quote, “moving on” to become a republic.

PRIME MINISTER ANDREW HOLNESS: But Jamaica is, as you would see, a country that is very proud of our history, very proud of what we have achieved. And we are moving on. And we intend to attain, in short order, our development goals and fulfill our true ambitions and destiny as an independent, developed, prosperous country.

AMY GOODMAN: For more, we go to Jamaica to speak with a member of the Jamaican Parliament who met the royals during their tour and was accused of snubbing the duchess, Kate Middleton, but says photographs that show her looking away misrepresent their cordial exchange. Lisa Hanna is a senior member of Jamaica’s Parliament for the opposition and a shadow minister for foreign affairs and foreign trade. She has a new piece in The Guardian headlined “I did not 'snub' Kate Middleton, but Jamaica needs more than royal regrets over slavery.”

LISA HANNA: Thank you for having me.

AMY GOODMAN: Can you tell us exactly what happened and what you’re calling for?

LISA HANNA: OK. So, I was at the airport representing the lead of the opposition, both myself and the minister of foreign affairs and foreign trade. And we met the Duchess of Cambridge and we met Prince William coming off the plane, and we had cordial conversations. I think, like in anything else, there perhaps may have been a moment when a manipulated type of two-second video would have made it appear as if I turned away from her. But there was nothing which in that entire meeting would have given the impression to her or to anyone else, based on the many, many photos and videos that are circulating online, that we had nothing but a respectful, cordial, fun-loving conversation. You know, I welcomed her — it was her first time to Jamaica — and told her some of the things that she could do apart from what she was doing in the official duties. So, that is what had happened.

And I think the British press, rather than looking at the matters at hand which are critical and important and urgent, chose to use personalities to trump, you know, the more important issues at hand. So that became more viral, I guess, to subdue the issues of reparations and what the country was actually feeling, and indeed many CARICOM nations are feeling at this point, in terms of how we would like to, you know, engage the United Kingdom government on where we need to now go as a region.

AMY GOODMAN: I’m looking at some signs that say “No to the royal family,” in all different ways. What are the steps for Jamaica to become a republic and remove Queen Elizabeth as head of state?

LISA HANNA: OK, you can either go through a referendum or you can amend the Constitution. So, you can either put it to a vote of the country or we can amend the Constitution. So, it’s not a difficult thing to do. Barbados has done it, and they did it with elegance, and I think they were very respectful in the way that they have done it. And we have significantly been calling for Jamaica to have its own head of state, removing the monarchy as our head of state, not only because we believe that as a nation we have the ability to do it on our own and to chart our own course into the future, but also because Jamaicans don’t really benefit from having the monarchy as our head of state.

You know, ordinary Jamaicans, it’s very difficult for Jamaicans to get a visa to go to the United Kingdom. And certainly this region, Jamaicans, as well, after World War II, were part of the Windrush generation, and we saw what happened with many of them last year at the appreciation that they gave. I mean, now they’re trying to step up. But we have a lot of respect for nations around the world. The beauty about who we are as Jamaicans is we will tell you how we feel. It doesn’t mean after that we won’t play a game of dominoes or have a drink, but we are unabashed in our resolve to make you understand that there were atrocities. There were crimes against humanity. You know, the systemic injustice and racial indignation that Black people feel as a result of 300 years of being bludgeoned by another race — and, in fact, by the monarchy — is something that just doesn’t go away.

So, the CARICOM Commission has put forward a 10-point plan, which looks to some of the dialogue that we’d like to have and some of the things that we believe ought to come out of reparations. Other countries have paid reparations. I think the only time that the U.K. has paid reparations was in Kenya, to the Kenyans for the uprising between the Mau Mau and the U.K. government in seeking their own freedom. So we must look at how colonialism has impacted the inequality, the inequity, the lack of opportunity, the way that no schools were left in the Caribbean per se. There were no health facilities. There were no economic opportunities, because what Britain did was to pay the slave owners and the plantation owners, when slavery came to an end, for their losses. The slaves never got anything. And so, if you have that kind of setback from then — but what we’re saying, and as I said also in The Guardian piece, is that this should be used as a tipping point for the royals, the young royals in particular, to reset how they see their leadership charging away into the future with more enthusiasm for a fairer global society.

AMY GOODMAN: You mentioned the Windrush generation. And if you can explain, for the many who are not familiar with this population in Britain, that Britain actually tried to deport after a period of time, explain who they are.

LISA HANNA: The Windrush generation — and thank you for that. The Windrush generation are my grandmother’s, my — the older generation after World War II. So, when World War II ended, the United Kingdom called for able-bodied persons from the colonies to come and help rebuild the railroads, the roads, the buildings after the war. And it was Jamaicans and others who went to the United Kingdom to rebuild those facilities. They’re the ones who rebuilt it. They’re the ones who, say, put their sweat, their time, their effort.

And what had happened was, some of their — some of them and some of their children were not properly documented. And quite recently, many of them were deported, after so many years of being there. And it was a scandal in the U.K., and the Foreign Office had to very, very quickly — because it was heinous. It was hurtful. It was unbelievable, certainly, to many of us in Jamaica and the Caribbean who have relatives there from way back as the 1950s and the late 1940s, to recognize that this had actually happened. And that’s the Windrush generation. They were the ones who rebuilt.

AMY GOODMAN: I want to go back to Prince William speaking in Jamaica.

PRINCE WILLIAM: I strongly agree with my father, the Prince of Wales, who said in Barbados last year that the appalling atrocity of slavery forever stains our history. I want to express my profound sorrow. Slavery was abhorrent, and it should never have happened.

AMY GOODMAN: So, that is Prince William. And I’m wondering, MP Hanna, if you had a conversation with either him or Kate Middleton. But most importantly, of course, what exactly you’re calling for? If you can talk about the whole reparations movement, the CARICOM Reparations Commission that you were a part of a few years ago? What are we talking about here?

LISA HANNA: Well, you would have seen that I said that I didn’t think both Prince William and Prince Charles were very bold or courageous in what they said, because condemnation without action is hollow. And so, while we appreciate the royal regrets, which is what I said, it doesn’t go far enough. What we would like to see is you condemn something, you say sorry for it, and you say, “Here’s what we are going to do to right those wrongs of history.”

It’s not only abhorrent. You have to get stronger in your actions. And that’s what people want to see. Gone are the days when we would just accept a beautiful speech. That doesn’t placate us, because words without actions only offend us. And that’s what I think you saw when they came. And I think the prince and the duchess need to see this as an opportunity. It was an important trip for them. And rather than see it as a turbulent start, it’s just the start. It’s not the end of their journey. And they should use this start as a tipping point to shape how they’re going to lead in their ascendancy.

AMY GOODMAN: Lisa Hanna, we want to thank you so much for being with us, senior member of Jamaica’s Parliament. 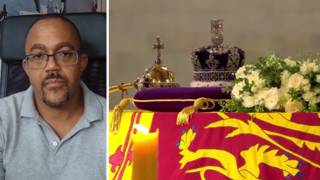