Russian Crackdown on Dissent Intensifies as Over 13,000 Arrested for Opposing Ukraine Invasion

We speak to Russian activist and historian Ilya Budraitskis after over 5,000 antiwar protesters were detained on Sunday as part of a sweeping crackdown on Russian civil society and the media. Activists in Russia are relying on alternative outlets such as social media for information, as the Russian government continues to censor major news outlets. Writers and independent news outlets such as Novaya Gazeta have faced the threat of criminal investigations for spreading so-called disinformation, which includes using the words “invasion” and “war” to describe Russia’s military actions in Ukraine, says Budraitskis.

StoryOct 13, 2022Two Voices from Russia & Ukraine on Putin, Resistance Inside Russia & Their Views on Anti-Imperialism

Antiwar protests are continuing in Russia. A local monitoring group says over 5,000 people were arrested by police across 69 Russian cities Sunday. This comes as part of a sweeping crackdown on civil society and the press. Russian President Vladimir Putin has signed a new law to impose jail terms of up to 15 years for spreading so-called false information about the military or its activity in Ukraine.

The prominent independent newspaper Novaya Gazeta said it was removing its reporting on the invasion because of censorship. The paper’s editor, Dmitry Muratov, was one of the recipients of the 2021 Nobel Peace Prize just a few months ago. In a message to its readers, the paper said, quote, “Military censorship in Russia has quickly moved into a new phase: from the threat of blocking and closing publications (almost fully implemented) it has moved to the threat of criminal prosecution of both journalists and citizens who spread information about military hostilities that is different from the press releases of the Ministry of Defense,” unquote.

On Thursday, independent Russian channel TV Rain went off the air, with its staff walking off set saying “No to war.” Non-Russian news outlets, including CNN, ABC, CBS, Bloomberg and BBC, have moved to limit their activity in Russia.

We’re joined now by Ilya Budraitskis. He is a Russian historian and political writer. He’s the author of the award-winning book Dissidents Among Dissidents: Ideology, Politics and the Left in Post-Soviet Russia. We last spoke to him from Moscow in February. He has since left Russia.

Welcome back to Democracy Now!, Ilya. If you can talk about the crackdown on the protests and the press? Again, at this point, I think it’s over 13,000 people have been arrested across Russia for protesting.

ILYA BUDRAITSKIS: Yeah. So, in fact, we’re entering the new political reality in Russia for now, because all the previous, let’s say, laws of game, they’re not working. And if before, just months, two months ago, you could be arrested for the participation in the street demonstration and just spent some days in prison or pay some fine, for now if you’re arrested or if you just spread some information which is different from the official point of view, you could be imprisoned for years. And that is the new situation. That’s a new level of risk for the protest movement in Russia. And, of course, those people who just yesterday came to the streets of the main Russian cities, they are extremely, extremely brave, and I think they should be a part of the heroic part of the history of the global antiwar movements.

AMY GOODMAN: Can you talk about who the people are who are protesting and how much information is getting out about these protests all over Russia right now, despite the crackdown on the press?

ILYA BUDRAITSKIS: So, most of those people, they are young people. They’re, let’s say, some students or just young people under 25. And unfortunately, those part of the population which actively oppose the war is very, let’s say, limited in terms of generations and in terms of access to information, because, as probably was told already in your programs, in Russian official media the picture of reality, the picture of what is happening in Ukraine, is totally different. It’s like an alternative reality. There’s no images of bombings of the Ukrainian cities. There is no even any true information about the actions of the Russian military units in Ukraine. So, in fact, most of population have, unfortunately, a very wrong understanding of what is really going on there. So, those who came to these protests last days, they mostly get their alternative information from some social media which are still accessible in country or from the, let’s say, alternative oppositional websites, which — most of them which are now blocked, but you still can access them using the VPN and so on.

AMY GOODMAN: The significance of Dmitry Muratov, who won the 2021 Nobel Peace Prize, his newspaper, Novaya Gazeta, saying they’re just not going to report it because of the censorship?

ILYA BUDRAITSKIS: Yes, absolutely. So you have a new situation with the censorship. And as you know probably, even the term “war” or the term “invasion,” they’re described as the disinformation or the fake news in Russia, and you could be — according the new law just adopted by the parliament couple of days ago, you can be imprisoned up to 15 years for the distribution of such disinformation. Yes, so, and already we have criminal investigations on people who not just write something in this way, yeah, but even repost some news on social media which call this war a “war.” Yeah? So, the situation —

AMY GOODMAN: “War” or “invasion,” you can’t use those words.

ILYA BUDRAITSKIS: Or “invasion,” yes, you also can’t use the term “invasion.” You can use only the term “special military peacekeeping operation.” And also, you can’t spread any alternative information of the losses of the Russian army, and you only can use the official information from the Russian Ministry of Defense. And the difference between these numbers, so if you look on the numbers reported by Ukrainian side and the numbers reported by Russian side, they are so different, so different from each other. So, just couple of days ago, Russian Ministry of Defense first time officially recognized that around 500 Russian soldiers already died in Ukraine. So, on Ukrainian sources, you have the information that more than 7,000 Russian soldiers already were killed. And, of course, you can’t continue this censorship for a long period of time, because all these soldiers who already died in Ukraine, all these Russian soldiers, they have their relatives, they have their families in the different areas of Russian Federation. And, of course, this is starting to form some different point of view among some part of the Russian people.

AMY GOODMAN: Are people hearing the pleas of Ukrainians? Like on Friday, President Zelensky appealed to Russians to stage protests over Russian forces’ seizure of Europe’s largest nuclear power plant, Zaporizhzhia. Now thousands of Ukrainians are fleeing that area. Then you’ve got the Ukrainians telling the Russian mothers to come pick up their soldier sons in Ukraine. Are you hearing these pleas? Are they hearing in Russia?

ILYA BUDRAITSKIS: Unfortunately, as I said before, the access to the information is very limited. And I think that this address by Zelensky also was distributed only around those who have this access to the alternative information, to that sort of social media.

AMY GOODMAN: Ilya, we don’t have much time, and I want to get to a few points. Sanctions, the effect of these sanctions on the people of Russia, the population?

ILYA BUDRAITSKIS: And we can’t discuss it in the, let’s say, rational way.

AMY GOODMAN: Have you been shocked by what has taken place?

ILYA BUDRAITSKIS: Of course. Of course, as millions of people in my country.

AMY GOODMAN: Do you think the protests will continue?

ILYA BUDRAITSKIS: I hope so, despite of the very, very brutal, very aggressive pressure that we have from the top.

AMY GOODMAN: Did you flee because of what’s taking place?

ILYA BUDRAITSKIS: In fact, I don’t want to talk about it much.

AMY GOODMAN: OK. Ilya Budraitskis, I want to thank you so much for being with us. Ilya Budraitskis is Russian historian and political writer, author of Dissidents Among Dissidents: Ideology, Politics and the Left in Post-Soviet Russia.

That does it for our show. Check our website for jobs. I’m Amy Goodman. Stay safe.

Two Voices from Russia & Ukraine on Putin, Resistance Inside Russia & Their Views on Anti-Imperialism 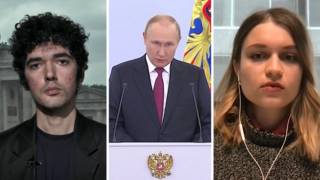 Two Voices from Russia & Ukraine on Putin, Resistance Inside Russia & Their Views on Anti-Imperialism