Imprisoned WikiLeaks founder Julian Assange is “crumbling” physically and psychologically, says journalist Chris Hedges, who last week attended Assange’s wedding to his longtime partner Stella Moris at London’s Belmarsh prison. Assange has been behind bars for nearly three years awaiting a possible extradition to the United States on espionage charges for publishing documents revealing war crimes committed in the wars in Iraq and Afghanistan. Hedges says Assange exposed the “most important information” of this generation, along with NSA whistleblower Edward Snowden.

AMY GOODMAN: So, speaking of the walls closing in and press freedom, I wanted to ask you about WikiLeaks founder Julian Assange. This month Britain’s highest court rejected an appeal from Julian, who’s seeking to block his extradition to the United States. The ruling means the British home secretary will have the final decision on whether to turn Assange over to the Biden administration. He faces espionage charges that could bring up to 175 years in prison, after he published classified U.S. documents on WikiLeaks that exposed war crimes — you know, the Afghan War Logs, the Iraq War Logs, State Department documents going back decades. Now, Julian Assange’s lawyers argue he could face prolonged solitary confinement in a U.S. supermax prison, conditions that are tantamount to torture. Chris Hedges, you were in London last week as a guest of the imprisoned WikiLeaks founder, Julian Assange, and Stella Moris for their wedding, which they fought for, in the maximum-security Belmarsh prison. And I just want to play what you said outside the prison.

CHRIS HEDGES: A society that prohibits the capacity to speak in truth extinguishes the capacity to live in justice. And this is why we are here today. Yes, all of us who know and admire Julian decry his prolonged suffering and the suffering of his family.

AMY GOODMAN: So, that’s the Pulitzer Prize-winning journalist Chris Hedges speaking last week in London outside the Belmarsh prison. In January, we spoke to Stella Moris on Democracy Now! She was at that time the fiancée of Julian Assange.

STELLA MORIS: His physical health and his mental health are obviously deteriorating, because he’s only a man. He’s a fighter. He’s a strong person, a strong-willed person who believes in the work that he’s done, and he’s aware that this is a fight against a monumental injustice, but there’s only so much a man can take.

AMY GOODMAN: Stella, since we’ve spoken, you had applied to be married, the two of you. The prison forbade that and then reversed their decision. And today, as you stood outside the new court ruling, you said, “Today we won, but Julian continues to suffer. Julian must be freed.” Your final 10-second comment?

STELLA MORIS: Well, you know, Julian — for every win that we get, Julian’s situation doesn’t seem to change. And this is punishment through process. That has to end. The Biden administration should just drop this. We shouldn’t have to be taking it through the U.K. justice system, because this is a political prosecution that was initiated by the Trump administration, and it is causing ongoing harm.

AMY GOODMAN: So, that’s Stella Moris, now the wife of Julian Assange and the mother of their two children. Chris Hedges, if you can talk about what Julian Assange faces right now, does he have any final appeal, and why you believe he has been held for as long as he has? Before the Belmarsh prison, of course, taken refuge in the Ecuadorian Embassy, where we interviewed him a number of times, in London. He had been granted political asylum.

CHRIS HEDGES: Well, there’s been a long — I mean, let me just throw out that because UC Global, the Spanish security firm, in the embassy filmed all of Julian’s meetings with his attorneys, revoking or destroying the capacity for attorney-client privilege, the case shouldn’t even be in court. This has been a kind of judicial farce. Julian did not commit a crime. In fact, the people who did commit the crimes, which he exposed, have never been charged. He ripped back the veil, in a way that no other publisher has done in our lifetime, on the inner workings of power, whether it was the Podesta emails or Vault 7, which exposed the ability of the CIA to hack everything — our smartphones, our televisions, even our cars — or the Iraqi War Logs, which you mentioned. And the ruling elites are determined to destroy him.

So, Stella mentioned his precarious condition. Well, it’s quite dire, we know. I was in London covering the court trials — or, they’re not trials, actually — the hearings about the extradition. And he’s been — was observed pacing his cell frantically, banging his head against the wall, hitting himself in the face, hallucinating, calling the Samaritan hotline because, in his words, he thought about committing suicide hundreds of times a day. He has suffered a stroke. He’s on antidepressants. They haul him off to the medical wing in isolation. He’s crumbling, physically and psychologically. And I think that’s the point.

He can go back now, if — if, as expected, the home secretary rules in favor of the extradition, he can go back to the lower court, which blocked his extradition based on his potential for being a suicide risk and the harsh conditions in American prisons. He can challenge the other points. This is a legal dance that, I suppose, could last up to a year. Meanwhile, he is, of course, deteriorating. But everything looks as if it is engineered to ship him off to Gordon Kromberg in the Eastern District Court of Virginia, who is the kind of grand inquisitor. He persecuted my friend Sami Al-Arian for years and sent Daniel Hale, who exposed the widespread killing of civilians by the drone program, into prison for 45 months. Those of us who have followed the case closely have just watched this burlesque of — it’s kind of a — you know, it’s more like the Lubyanka or a show trial than it is the best of British jurisprudence, which I think is one of the reasons they make it so difficult to cover.

And I just want to throw in, Amy, that there were six guests, including Craig Murray, who’s probably done the best coverage of the trial. And at the last minute, the prison denied us entry, I suppose because — along with a photographer, I suppose because it’s part of making Julian disappear. There are no photos, no images of Julian, other than that one in the police van. And after that, they put shutters on the windows so photographers couldn’t take pictures of him. And I think they didn’t want us in there, because, of course, we would write about it — I wrote about it anyway — because it renders him human and, I think, exposes the kind of suffering, inexcusable suffering, that has been visited on him and his family and, of course, his two children and his father. So, it’s absolutely appalling. And we criticize Vladimir Putin, as we should, for press censorship, but what about Julian? What about Julian Assange? So, again, it’s that kind of hypocrisy that characterizes the American ruling class, and, unfortunately, much of the American media itself.

AMY GOODMAN: So, he has been held at Belmarsh for more than 1,000 days, and, of course, in captivity in the Ecuadorian Embassy — because if he stepped outside, he would be arrested — for years before that. If you could end by talking about what he did expose, this trove of documents, for which many leading newspapers in this country and around the world, from El País to The New York Times, won Pulitzer Prizes?

CHRIS HEDGES: Well, he exposed the lies that were told repeatedly about the wars in the Middle East — the 700 civilians who approached too closely to checkpoints and were all gunned down and killed; the torture, routine torture, in places like Abu Ghraib — you know, along with the kind of corruption. I mean, for instance, in Haiti, he exposed cables where the U.S. Embassy was in collusion with the Haitian ruling class to thwart any rise in the minimum wage. I don’t know what the minimum wage is in Haiti. It’s probably under a dollar an hour. I think it’s 33 cents or something. I mean, this is just — and this, of course, sparked all sorts of — remember, the Arab Spring and the pushback against the corrupt ruling class in Haiti, it all came because of WikiLeaks. He exposed the duplicity of Hillary Clinton, who was saying one thing to us on the campaign trail and accepting $675,000 to give three talks at Goldman Sachs, a sum so large it can only be considered a bribe. It exposed that she orchestrated the war in Libya to burnish her own credentials. So, it was —

CHRIS HEDGES: He provided the most important information, I would argue, along with Ed Snowden, of our generation. And they’re making sure that he’s crucified for it.

AMY GOODMAN: Chris Hedges, I want to thank you for being with us, Pulitzer Prize-winning journalist, award-winning author and activist. 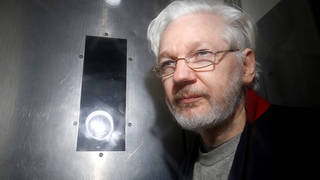