YouTube has deleted the entire archive of “On Contact,” an Emmy-nominated television show by Pulitzer Prize-winning journalist Chris Hedges which was hosted on the Russian government-funded news channel RT America. We speak with Hedges, who connects the YouTube censorship of his show to a growing crackdown on dissenting voices in American media. “There’s less and less space for those who are willing to seriously challenge and question entrenched power,” says Hedges, who says “opaque entities” like YouTube shouldn’t have the power to take down outlets like RT America, despite the channel’s source of funding. “Are we better off not hearing what Russia has to say?” asks Hedges.

We spend the rest of the hour with Chris Hedges, the Pulitzer Prize-winning journalist, who has just seen YouTube delete the entire archive of his Emmy-nominated television show On Contact, which he hosted for six years on RT America, a news channel funded by the Russian government that recently closed down. This comes as Britain announced Thursday new sanctions on 14 more Russian entities and people, including state media organizations behind RT and Sputnik and some of their senior figures, to target those who spread President Putin’s, what they called, quote, “fake news and narratives.” RT’s deputy editor-in-chief, Anna Belkina, told Reuters, quote, “With this action, the U.K. government has sounded the death knell for media freedom in Britain.” Belkina said Britain had tried to silence both RT and WikiLeaks founder Julian Assange.

For more, we’re joined in New York by Chris Hedges, who is just back from London as a guest at the wedding of the imprisoned WikiLeaks founder, Julian Assange, and his partner, now wife, Stella Moris. We’ll talk more about that in a minute. But first, Chris, you wrote a piece headlined “On Being Disappeared” about having your RT show’s archive completely deleted, saying, “If this happens to me, it can happen to you, to any critic anywhere who challenges the dominant narrative.” Chris Hedges, can you lay out what happened?

CHRIS HEDGES: There was no notice. There was no warning. There was no inquiry. It just vanished. It’s not surprising. I think if you go back and look at the 2017 director of national intelligence report, seven pages were devoted to RT. And while they accused RT of disseminating Russian propaganda, all the examples that they cited in that report were that RT was giving a voice to Black Lives Matter activists, anti-fracking activists, Occupy activists, third-party candidates — all of which was true. And so, I think this was the culmination. We expected it.

I was on your show, by the way, when they deleted Trump from the social media, and vigorously opposed it, not because I ever want to read another tweet by Donald Trump, but because we don’t want these opaque entities — and they know everything about us, we know nothing about them — to wield this kind of censorship. What I didn’t expect when I was arguing not to delete Trump from social media was that I would so quickly be one of the victims.

AMY GOODMAN: So, do you have any access to this archive?

CHRIS HEDGES: Through the — the RT.com On Contact site is still up. I don’t know how much longer. So we’ve copied them, so at least I’ll have them. But, no, off of YouTube. And you had hundreds of thousands of views for some of those shows. It’s all gone.

I want to stress that there wasn’t one show on Russia, and the few times that we ever mentioned Putin or Russia was not in very flattering terms. I remember the great investigative journalist Allan Nairn using RT — I’m sure, on purpose — to excoriate Russia for war crimes in Syria. But we broadcast it.

This was a show that, if we had a functioning public broadcasting system, would be on, probably late at night. I primarily interviewed authors — I’m an author myself, of course, have written 14 books — and intellectuals that I admire — Cornel West, Noam Chomsky, Slavoj Žižek. And it was erased for its content, I mean, not because it was Russian propaganda but — it wasn’t — but because there’s been such a marginalization of critics of anti-imperialism, anti-capitalism. I’m a very strong supporter, very public supporter, of the Boycott, Divestment, Sanction movement, which, of course, I think was the key issue that saw my great friend Cornel West denied tenure at Harvard.

The walls have just closed in, Amy, since I began as a reporter in Central America in the 1980s. There’s less and less space for those who are willing to seriously challenge and question entrenched power. I mean, you do it. Allan does that. But it’s become a pretty lonely profession. And, of course, Bob Scheer, who I write for Scheer Post, but he doesn’t have any money. He doesn’t have any advertisers — also true when he ran Ramparts. So, it’s becoming harder and harder. I’ve gone to Substack, like Matt Taibbi and Glenn Greenwald, ChrisHedges.substack.com. And if I can get enough subscribers, I will fund the column and fund the show myself. But that’s where we’re left at. And, of course, you pioneered that model for many of us.

AMY GOODMAN: And, Chris, if you were on RT America right now, if it existed, if DirecTV hadn’t canceled, taken RT America off, what would you be saying about Russia’s invasion of Ukraine?

CHRIS HEDGES: Well, I denounced Russia’s invasion of Ukraine at the inception, for the same reason I denounced our invasion and occupation of Iraq at the inception — for which, of course, I ran into conflict and had to leave The New York Times — because preemptive war, under post-Nuremberg laws, is a criminal war of aggression. And I was very clear about that. Now, RT went dark six days later. I don’t — I have hard time believing Moscow would have allowed me to publicly embrace that kind of critique and remain on the air. I mean, I don’t know. That’s conjecture. But, yes, I can’t — it would be deeply hypocritical to lambaste the United States for war crimes and not lambaste Vladimir Putin for war crimes — with this caveat: The invasion of Iraq, occupation of Iraq, was based on lies and fabrications.

I believe — I was in Europe in 1989 covering the revolutions in Eastern Europe. And this, of course, was — we assumed, naively, that NATO would be obsolete. NATO was created to prevent Soviet expansion in Eastern, in Central Europe. I saw the leaders of — Margaret Thatcher and the Reagan administration, Hans-Dietrich Genscher, all promise Gorbachev that NATO would not be expanded beyond the borders of a unified Germany. Then later, with the Clinton administration, after 13 or 14 states now, of course, have been integrated into NATO, the Clinton administration promised not to station troops. This was another violation. Russia has every right to feel threatened and baited. That doesn’t justify the war crime that they committed. I mean, they pulled the trigger. But again, this kind of understanding of the historical antecedents that led to the attack on the Ukraine — you’ve had Katrina on here. She, of course, knows Russia very well. That’s almost unheard of within the kind of cheerleading from the media, within the mainstream media.

AMY GOODMAN: — of The Nation. Chris, you wrote the award-winning book, War Is a Force That Gives Us Meaning. What does this war give Russia in terms of meaning?

CHRIS HEDGES: Well, I just read The New York Times this morning, and they’re talking about Putin’s approval ratings going through the roof. That’s what war does. It unleashes all sorts of dark, toxic poisons, including the poison of nationalism, which we imbibed in Iraq and, I think, to a certain extent, are imbibing now, ignoring the two decades of egregious war crimes that we committed in the Middle East. The idea that somehow NATO is a defensive organization would be greeted with ridicule in countries like Iraq or Afghanistan or Syria or anywhere — or Libya or anywhere else. So, yeah, of course, every society is susceptible to that dark elixir. Russia is no exception. They’ve, of course, turned on their press, and they’re drinking deep from it. But we’re as guilty of that sin as the Russians.

AMY GOODMAN: What would you say to critics that say RT America, RT, was an outlet for Russian state propaganda, which is why it was targeted for removal by YouTube?

CHRIS HEDGES: Well, to a certain extent, that’s probably true. But are we better off not hearing what Russia has to say, not understanding why they think the way they do? I was a foreign correspondent for 20 years. My job was to be culturally, linguistically, historically, religiously literate, to step into the shoes of a Syrian or an Iraqi or a Palestinian — and, of course, I spent six years in Latin America and then, later, in Yugoslavia — and explain how the world looked from their vantage point, why they felt the way they did. And oftentimes the grievances they have are very legitimate. I certainly think that Putin’s complaints about the expansion of NATO have a great deal of credibility. It’s just a historical fact that the leaders of the West lied to Gorbachev, lied to Yeltsin and lied to Putin. That’s just historically true. We’re not a better world by shutting down these outlets and essentially living within our own echo chamber, especially when we wield the kind of military power that we do wield. And this gets into the whole collapse of foreign reporting. It’s kind of gone the way of the dinosaurs. But it’s extremely important, especially when you’re an imperial power. 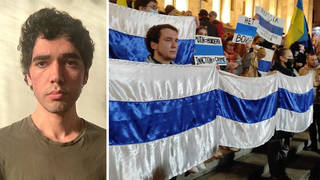