As the United States reels from an epidemic of mass shootings in schools, trains and other public places, we speak with Mark Follman, national affairs editor at Mother Jones, where he covers gun violence. Follman says mass shootings are typically planned over a period of time and follow a “robust trail of behavioral warning signs” that offer opportunities in community-based violence prevention to stop the crime before it happens. His new piece, “Horror on the NYC Subway — and How to Prevent the Next Attack,” draws on insights from his new book, “Trigger Points: Inside the Mission to Stop Mass Shootings in America.”

StoryAug 08, 2019Emergency Doctor to Trump: You Are Wrong, Mental Illness Is Not to Blame for Gun Violence Epidemic

Here in New York, a federal judge has ordered the suspected subway gunman held without bail, as the city and much of the United States reels from an epidemic of mass shootings in trains, schools and other public places.

We spend the rest of the hour with Mark Follman, national affairs editor at Mother Jones, where he covers gun violence and runs a mass shootings database. He has a new piece headlined “Horror on the NYC Subway — and How to Prevent the Next Attack,” that draws on insights from his new book, just out, Trigger Points: Inside the Mission to Stop Mass Shootings in America.

Mark, welcome back to Democracy Now! Let’s just talk about that article that you just wrote, looking at this shooting and the alleged shooter in New York, how to prevent these mass shootings.

MARK FOLLMAN: Well, one of the things that was immediately clear in the case of the subway attack was that this was an attack that was planned over a period of time. We could see that with immediate evidence that was found by investigators that the perpetrator had gone in, accessorized in a certain kind of gear and outfit, that he had used smoke grenades and then opened fire.

And this is really important, because we have several big myths about mass shooters that we constantly repeat when these attacks happen, and they’re unhelpful to really understanding the problem. I write about this at length in my new book, Trigger Points, that mass shooters don’t just suddenly snap. These are not impulsive crimes. These are crimes that are planned over a period of time, that develop. And there’s often, in almost every case, a robust trail of behavioral warning signs. And so, with that, there is also opportunity to potentially step in and intervene and prevent these attacks from happening.

JUAN GONZÁLEZ: And how, in this particular case, for example, from what you know — what might have been done to be able to apprehend this shooter before he actually took action?

MARK FOLLMAN: Yeah, this case would be, I think, a particularly challenging one. We’re still learning the details of it, so I want to be a little bit careful about analyzing it from that perspective. But, over time, I suspect we will find out more and more about the warning signs that were present with this individual, who apparently was living in pretty significant isolation.

But certainly his ability to access a firearm is a major question here, because we already know that he had a long criminal history and was still able to purchase a gun legally. This is a chronic problem in our country with the regulation of firearms, or lack thereof.

Beyond that, there was quite a bit of content that this perpetrator had posted on social media, videos he recorded ranting about various grievances and political ideology and hatred and anger, and in which, you know, there were quite a few signals that he was interested in and perhaps planning violence. And this is present in a lot of mass shooting cases.

So, the question then is: How do you detect that? Well, there are often people around perpetrators who see things like this, who get a sense of these threatening communications and feel unsettled by it. We’ve seen comments in the press, since the attack, of people who were neighbors, who found him to be kind of a disturbing and upsetting guy. Again, I think this is a tough case, because this person was apparently living in a pretty isolated set of circumstances before the attack. But many of these cases occur with perpetrators who are in workplaces or in schools. And in those cases, it’s even more stark, the evidence, when you go back and look at the cases, that there were people around the perpetrator who had a sense of something being wrong.

And when people speak up in that situation and reach out for help, if there is a protocol in place, with a method called threat assessment, that is the focus of my book, Trigger Points, a team can do a lot to step in and evaluate if a person is becoming dangerous, if a person is planning violence, and then try to intervene, in some constructive ways, ideally, to help that person onto a different path.

JUAN GONZÁLEZ: And I wanted to ask you the deeper question. I mean, we’ve confronted so many of these incidents of mass shootings over the decades now. What is it in American society that doesn’t — where the officials in government don’t act in a more forceful way to prevent these mass shootings? I mean, is it just the gun lobby, or is there something deeper in our society that basically accepts a culture of violence or feels powerless to be able to do anything about it?

MARK FOLLMAN: Yeah, that’s a great question, and I think it’s a big question, and it’s challenging to answer. Certainly, the political deadlock that we have in the country is an enormous problem. And we’ve watched it go on and on for years. There’s a remarkable disconnect, in my view, between what the majority of the American public wants about — in terms of gun regulations and gun violence, that we know from consistent polling over three decades now showing that the majority of the country, including conservatives and gun owners, wants more effective gun regulations, better background checks and other policies. So, the political disconnect is one part of the answer, and, I think, the power of the gun lobby, as you note.

Beyond that, I think there are some interesting broader cultural questions that we face. Why is it that this kind of violence is, in some ways, so accepted in our country? There’s a kind of a broad sense of resignation, I think, that there isn’t a whole lot we can do about it. I think that there is, you know, the sense that we’re a violent society inherently, that sort of these ways of thinking about the problem and talking about it, I think, validates it in certain ways, that in some ways is unhelpful and perpetuates the problem.

And this is part of what led me to write this book, because when I learned about this prevention method — behavioral threat assessment — I saw quite a lot of promise in it, in terms of its focus on getting out front of the problem, not just thinking about, you know, arguing about gun policy, which is very important and is a battle that will continue, but, you know, in my view, can’t be the only way that we approach this problem. This is a big, sprawling problem. It’s complex, and it requires a broader set of solutions. And so, by focusing more on community-based violence prevention work that is ideally constructed, I think, gets in the way of problem, is potentially very helpful to our prospects of doing better on this.

AMY GOODMAN: Mark, we’re going to do Part 2 of this conversation and post it at democracynow.org. But, very quickly, if we can use, what, the Oxford High School massacre as an example, when Ethan Crumbley opened fire, killing four students and injuring many others, now his parents also being held accountable — could we end with that and how you think that’s a perfect example of a mass shooting that could have been prevented?

MARK FOLLMAN: Yeah, the Oxford High School mass shooting is a particularly stark case in terms of what I’m talking about. The circumstances of it, you know, even for me, as someone who’s studied these cases for a decade now, quite astonishing in some ways in terms of the trail of warning signs and the number of people around the perpetrator who had a sense that he might commit this act of violence, including the parents. I mean, the alleged role of the parents is really quite shocking in some ways in their apparent negligence of the deteriorating situation with their son and his trajectory toward violence, appeared to even enable him by purchasing a firearm and ignoring warnings from the school. There are big questions about what the school did, as well, in terms of the warning signs being seen there. There were teachers who had become very alarmed about that student and had referred him to counselors. The counselors were so concerned that they demanded that the parents remove the student from the school the morning before he attacked.

And so, this was a case where if there were a threat assessment program in place and trained experts who had the ability to see better what was going on here in terms of warning signs, there would have been very different action taken, in my view. There’s no way that that student would have been returned to the classroom. So, even when you go beyond the disturbing questions of his access as a 15-year-old to a handgun, there’s also the question of: Why was the situation so ignored in some ways?

AMY GOODMAN: And we’re going to talk more about that in the second part of our conversation. Mark Follman, author of the new book Trigger Points: Inside the Mission to Stop Mass Shootings in America, national affairs editor at Mother Jones, where he covers gun violence and runs their mass shootings database, which we’re going to talk about.

Democracy Now! has an immediate job opening for a news writer/producer. Visit democracynow.org/jobs to find out more and apply immediately. That does it for our show. I’m Amy Goodman, with Juan González. Stay safe. 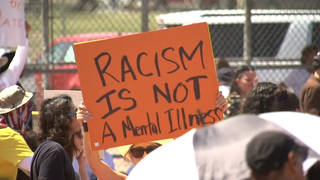