We speak with food systems experts Sofía Monsalve Suárez and Rachel Bezner Kerr about how to prevent a looming global food shortage. The global food crisis “is not a food shortage crisis” yet, says Suárez, secretary general of FIAN International, a human rights organization working for the right to food and nutrition. “The problem is access to food, that people don’t have money to pay for food, that people are jobless.” Both guests call for a fundamental “transformation” of the global food system, away from food trade systems and instead toward domestic production and food sovereignty.

As experts warn of a looming global food shortage, on top of what already exists, we’re joined by two guests to look at what led to the crisis and what to do about it. In Heidelberg, Germany, Sofía Monsalve Suárez is secretary general of FIAN International, a human rights organization working for the right to food and nutrition. In Montpellier, France, Rachel Bezner Kerr is the coordinating lead author for the chapter on climate change impacts and adaptation of food systems for the IPCC, the Intergovernmental Panel on Climate Change, their report titled “Impacts, Adaptation and Vulnerability,” that was published in February, also professor of global development at Cornell University.

We welcome you both to Democracy Now! Sofía Monsalve Suárez, let’s begin with you. Some say the food crisis was triggered by the pandemic and made worse by the war in Ukraine. What do you think of how it started, so we can talk about how it can be dealt with?

SOFÍA MONSALVE SUÁREZ: Yeah, thank you very much, Amy, for the invitation.

So, this is not new. This is probably the fourth crisis in 50 years. So, these very fragile industrial systems, food systems that we have in place, are failing. They are extremely fragile to the climate crisis, to the economic shocks, to conflict. And this is the problem. So, therefore, this crisis has been long in the make.

It is due to the dismantling of public and communal institutions taking care of providing food; skipping support to peasant farming; to decentralized systems. So we put all our eggs into this corporate food system, where countries have to rely on long food supply chains, you know, on global trade. And when we see disruptions — COVID was one example — then people in a very vulnerable situation, like, for instance, in Somalia, are in a total mess, because they rely on imports. So, this is one thing.

And then, the other thing is the financialization of food systems. There is a lot of speculation. Already in 2007, there is a speculation on food, on staples. Financial investors are running now on cereals again, on land. And this is a very important factor also in the current crisis.

NERMEEN SHAIKH: Sofía, you co-authored an article in The Guardian earlier this month headlined, quote, “Ukraine helps feed the world — but its farmers, seeds and future are in danger.” In the piece, you point out that in addition to farms and fields in Ukraine being destroyed by Russian forces, Ukraine’s national seed bank has been partly destroyed. Could you talk about the importance of seed banks and why they’re so important, and the fact, which you also raise, that four companies control 60% of the global seed market?

Now, what we see in Ukraine is actually that peasant farming, which has been completely neglected for years by the government in Ukraine because it was totally focused on the agribusiness sector for export, is the one which is currently helping to feeding the population in Ukraine, because it is resilient, even in times of war. So, what is very important is to keep these peasant seed systems in place in the fields. Seed banks are important, but it is even more important to protect the peasant seed systems, because they are resilient. They are able to adapt to climate change much quicker as — in time, as, let’s say, varieties developed in labs. So, therefore, I think that the important thing that we discover when looking at the example in Ukraine is how resilient peasant farming is, even in times of war and even despite discrimination and total neglect by the government over years.

NERMEEN SHAIKH: And I’d like to bring in Rachel Bezner Kerr. You were the lead author on the climate aspect — the food aspect of the latest IPCC report, the climate report. Could you speak about the impact of the climate crisis on food production and access?

RACHEL BEZNER KERR: Certainly. And just to clarify, I was one of the coordinating lead authors. It was a team of scientists that worked on that chapter. And that’s important because there’s many different dimensions to the climate crisis.

But I also want to agree with Sofía in terms of the points she’s raised. We highlighted in the report the vulnerability of smallholder producers to climactic events, in part because they depend on rain-fed agriculture for their livelihoods, as well as for food production. And they also play a really important role in providing these diverse food sources to communities and to the globe. And they’re often neglected from a policy perspective.

And so, when you have these extreme events, you often get this lethal combination, where you have a drought, so you have reduced food production, or you have flooding, and then you may have infrastructure disruptions. You get a loss of local diverse food types and a spike in food prices. And then poorer households can’t afford to get access to that food anymore. And this lethal combination, combined with something like conflict, can really lead to acute food insecurity experiences. And what we documented in the report is increasing scientific evidence of the increased temperature rise from greenhouse gas emissions being directly linked to increased numbers of acute food insecurity events.

But I would also agree with Sofía that it’s not a crisis that is short-term. This is something that has very much been long-term in the making. And our food system really needs to transform fundamentally to serve the needs of all and to be recognizing the underlying ecosystem that we depend on for our food.

AMY GOODMAN: You have said, Rachel —

RACHEL BEZNER KERR: I could talk about that some more — go ahead.

AMY GOODMAN: Rachel Bezner Kerr, you have said that poor nations in Africa and other regions of the world have become increasingly dependent on food imports. Why is that? And particularly looking at the Horn of Africa, at Ethiopia, at Kenya, at Somalia, Oxfam and Save the Children just did a report saying a child is dying every 48 seconds in just those three countries.

RACHEL BEZNER KERR: Well, the reliance on food imports has been a long-term structural process that was really brought about in the — starting in the 1980s under structural adjustment programs throughout Africa, where countries that were indebted were obliged to carry out programs that reduced their own food production, and they became increasingly reliant on food imports. So, that, it’s been a long-term process. And much of what Sofía raised in terms of some of the structural problems with our food system has led to what — the current circumstance in the Horn of Africa. Of course, in the Horn of Africa, you also have this combination of conflict and drought in the current moment that has really led to this acute food security crisis.

RACHEL BEZNER KERR: Yes. So, this is one of the bitter ironies of our current industrial food production system. It’s deeply reliant on fossil fuels, so it’s a major contributor to greenhouse gas emissions, which also makes it vulnerable to the other — to shocks, and really creating vulnerability through the way it produces food. Fertilizer requires a lot of fossil fuel to produce. It also has to have fossil fuels to distribute and to apply. And there are many other components of the way we produce food using this industrial model that leads to considerable greenhouse gas emissions.

So, in order to have a long-term reduction in the number of crises, we really need to transform our system to not be reliant on fossil fuels. And in our report, we highlight ecosystem-based approaches, such as agroecology, that rely on ecological processes and reduce this reliance on fossil fuels-based inputs, as really the way forward if we’re going to have a food system that is stable, resilient, and that is supporting our ecosystem that we depend on. So, things like pollinators and water quality, all of those ecosystem services that we depend on, are also undermined with the industrial model. And so, the key solution for getting out of the crisis, that we will be continually experiencing unless we reduce our greenhouse gas emissions, is transforming the food system to be much more ecological in the way that we grow and distribute food.

AMY GOODMAN: And, Sofía Monsalve Suárez, as we begin to wrap up, if you can comment on what you think are the most critical ways to deal with the hunger crisis in the world today, and who should be making these decisions?

SOFÍA MONSALVE SUÁREZ: Yes, I think we have to move away, finally, from this world food security strategy based on global trade and based on an industrial food system. It’s just simply not working, and it’s putting us at an enormous peril of all these famines that we are facing. So, therefore, we need to transform the food systems, industrial food systems, as Rachel is saying, to transition out of fossil fuel-based food systems towards agroecology and food sovereignty.

So, food sovereignty is about strengthening democracy, strengthening the groups and actors suffering most from hunger and malnutrition. But who is asking them what they need? Who is asking Somalia what they want to have? Nobody. The G7 is making the decisions. G7 want to continue with global trade as it is, no changes at all in the architecture of trade, investment and finances. And this is the problem. So, we really urgently need to tackle this and to speak and listen to the populations in the countries which are suffering most now.

AMY GOODMAN: Well, Sofía Monsalve Suárez, we thank you so much for being with us, secretary general of FIAN International, and Rachel Bezner Kerr, professor of global development at Cornell University, one of the coordinating authors of a chapter in the major IPCC climate change report.

Next up, the World Trade Organization makes a major decision about COVID vaccines. Stay with us. 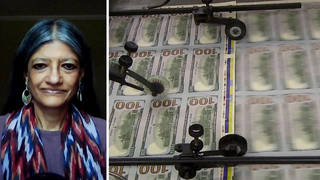