Minutes after rioters stormed the Capitol on January 6, 2021, White House Chief of Staff Mark Meadows seemed unperturbed and reluctant to act, according to live testimony from his former aide, Cassidy Hutchinson, at the public hearing on Tuesday. Then-President Donald Trump, rather than calling off his supporters, defended their chants to hang Vice President Mike Pence for validating the election results. “I remember thinking in that moment, Mark needs to snap out of this,” recalled Hutchinson. “I don’t know how to snap him out of this, but he needs to care.” Hutchinson also notes Meadows and Rudy Giuliani both sought pardons after the insurrection. Committee Vice Chair Liz Cheney presented evidence of possible witness tampering by allies of Trump. Meanwhile, in a video deposition with Trump’s former national security adviser Mike Flynn, who supported Trump’s efforts to overturn the election, Flynn repeatedly refused to answer questions from Cheney.

StoryJul 22, 2022Pence’s Secret Service Team Feared for Their Lives as Trump Egged On Mob to Target VP on Jan. 6

AMY GOODMAN: This is Democracy Now!, democracynow.org. I’m Amy Goodman, as we bring you highlights from the dramatic testimony of Tuesday’s surprise hearing of the House Select Committee to Investigate the January 6th Attack on the United States Capitol. Star witness Cassidy Hutchinson described how her then-boss White House Chief of Staff Mark Meadows reacted to the rioters storming the Capitol on January 6th. She was questioned by Republican committee Vice Chair Liz Cheney.

REP. LIZ CHENEY: Not long after the rioters broke into the Capitol, you described what happened with White House counsel Pat Cipollone.

CASSIDY HUTCHINSON: No more than a minute, minute and a half later, I see Pat Cipollone barreling down the hallway towards our office and rush right in, looked at me, said, “Is Mark in his office?” And I said, “Yes.” He just looked at me and started shaking his head and went over, opened Mark’s office door, stood there with the door propped open and said something to the — Mark is still sitting on his phone. I remember, like, glancing, and he’s still sitting on his phone. And I remember Pat saying to him something to the effect of “The rioters have gotten to the Capitol, Mark. We need to go down and see the president now.”

CASSIDY HUTCHINSON: A couple minutes later, so likely around between 2:15 and 2:25 — I know the tweet went out at 2:24. I don’t remember if I was there when the tweet went out or if it happened right afterwards. But Jim had called. I answered the phone, said, “One second.” He knew it was — I guess he knew it was — and I introduced myself, but I — I don’t remember if he called my cellphone or if he had called one of Mark’s. But I answered the phone and said, “One sec. Mark’s down the hall. I’m going to go hand the phone to him.” He said, “OK.”

So I went down. I asked the valet if Mark was in the dining room. The valet said, “Yes.” I opened the door to the dining room, briefly stepped in to get Mark’s attention, showed him the phone, like flipped the phone his way so he could see it said Jim Jordan. He had stepped to where I was standing there holding the door open, took the phone, talking to Jim with the door still propped open. So I took a few steps back. So I probably was two feet from Mark. He was standing in the doorway going into the Oval Office dining room.

They had a brief conversation. And in the crossfires — you know, I heard briefly, like, what they were talking about, but in the background I had heard conversations in the Oval dining room at that point talking about the “Hang Mike Pence” chants.

REP. LIZ CHENEY: That clip ended, Ms. Hutchinson, with you recalling that you heard the president, Mr. Meadows and the White House counsel discussing the “Hang Mike Pence” chants. And then you described for us what happened next.

CASSIDY HUTCHINSON: It wasn’t until Mark hung up the phone, handed it back to me, I went back to my desk. A couple minutes later, him and Pat came back, possibly Eric Herschmann, too. I’m pretty sure Eric Herschmann was there, but I’m — I’m confident it was Pat that was there. I remember Pat saying something to the effect of, “Mark, we need to do something more. They’re literally calling for the vice president to be effing hung.”

And Mark had responded something to the effect of “You heard him, Pat. He thinks Mike deserves it. He doesn’t think they’re doing anything wrong,” to which Pat said something: “This is effing crazy. We need to be doing something more,” briefly stepped into Mark’s office.

And when Mark had said something — when Mark had said something to the effect of “He doesn’t think they’re doing anything wrong,” knowing what I had heard briefly in the dining room, coupled with Pat discussing the “Hang Mike Pence” chants in the lobby of our office, and then Mark’s response, I understood “they’re” to be the rioters in the Capitol that were chanting for the vice president to be hung.

REP. LIZ CHENEY: Let me pause here on this point. As rioters chanted “Hang Mike Pence,” the president of the United States, Donald Trump, said that, quote, “Mike deserves it,” and that those rioters were not doing anything wrong. This is a sentiment that he has expressed at other times, as well. In an interview with ABC News correspondent Jonathan Karl, President Trump was asked about the supporters chanting “Hang Mike Pence” last year. Instead of condemning them, the former president defended them.

DONALD TRUMP: Because it’s — it’s common sense, Jon. It’s common sense that you’re supposed to protect — how can you — if you know a vote is fraudulent — right?

DONALD TRUMP: How can you pass on a fraudulent vote to Congress?

REP. LIZ CHENEY: President Trump’s view that the rioters were not doing anything wrong and that, quote, “Mike deserved it” helps us to understand why the president did not ask the rioters to leave the Capitol for multiple hours. In fact, he put this tweet out at 2:24 p.m. Ms. Hutchinson, do you recall seeing this tweet, in which the president said the vice president did not have the courage to do what needed to be done?

CASSIDY HUTCHINSON: I do.

REP. LIZ CHENEY: And, Ms. Hutchinson, what was your reaction when you saw this tweet?

CASSIDY HUTCHINSON: As a staffer that worked to always represent the administration to the best of my ability and to showcase the good things that he had done for the country, I remember feeling frustrated, disappointed, and, really, it felt personal. I was really sad. As an American, I was disgusted. It was unpatriotic. It was un-American. We were watching the Capitol building get defaced over a lie.

REP. LIZ CHENEY: Inside the White House, the president’s advisers, including members of his family, wanted him to deliver a speech to the country. Deputy White House counsel Pat Philbin prepared the first draft of what would be the president’s remarks on national healing, delivered via pretaped video on January 7th. When he arrived at the White House on the 7th, Mr. Philbin believed that more needed to be said, so he sat down and started writing. He shared the draft with Pat Cipollone, who also believed the president needed to say more. Mr. Cipollone agreed with the content, as did Eric Herschmann, who reviewed the draft. The committee has learned that the president did not agree with the substance as drafted, and resisted giving a speech at all. Ms. Hutchinson, do you recall discussions about the president’s speech on January 7th?

CASSIDY HUTCHINSON: I do.

REP. LIZ CHENEY: Let’s listen, Ms. Hutchinson, to what you told us about that and about the process of crafting those remarks.

CASSIDY HUTCHINSON: I learned from a conversation with Mark and overhearing between him and the White House counsel and Eric Herschmann, as well, that Trump didn’t necessarily think he needed to do anything more on the 7th than what he had already done on the 6th. When he was convinced to put out a video on the 7th, he — I understand that he had a lot of opinions about what the context of that announcement were to entail.

I had original drafts of the speech where, you know, there were several lines that didn’t make it in there about prosecuting the rioters or calling them violent. He didn’t want that in there. He wanted to put in there that he wanted to potentially pardon them. And this is just with the increased emphasis of his mindset at the time, which was he didn’t think that they did anything wrong; the people who did something wrong that day — or, the person who did something wrong that day was Mike Pence by not standing with him. 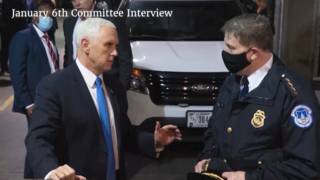 Pence’s Secret Service Team Feared for Their Lives as Trump Egged On Mob to Target VP on Jan. 6