President Biden will be visiting the Palestinian territories and meeting President Mahmoud Abbas on Friday. Ahead of Biden’s trip, the family of Shireen Abu Akleh demanded Biden call out Israel over her killing while covering a raid on the Jenin refugee camp in the West Bank. On Wednesday, U.S. Secretary of State Antony Blinken invited Shireen Abu Akleh’s family to visit the United States. “We will continue to call for justice, and we will continue to call on the U.S to carry out a transparent investigation by an independent body,” says Shireen Abu Akleh’s niece, Lina Abu Akleh. “In addition, we continue to call on the U.N. and the ICC to carry out an investigation and hold Israel accountable and put an end to this grotesque impunity that Israel continues to enjoy.” We speak with Rashid Khalidi, Palestinian American professor of modern Arab studies at Columbia University.

AMY GOODMAN: So, I wanted to ask you about Shireen Abu Akleh and all the latest developments. So many news organizations, from The New York Times to CNN to Al Jazeera, have investigated the killing, saying it was the Israeli military that killed the famous Palestinian American journalist who appears on Al Jazeera. Now, President Biden is visiting the Palestinian territories and meeting President Mahmoud Abbas on Friday. Professor Khalidi, we last spoke to you after Shireen Abu Akleh was shot dead during that Israeli army raid in the Jenin refugee camp in May.

AMY GOODMAN: Ahead of Biden’s trip to Israel, the family of Shireen Abu Akleh demanded Biden call out Israel over her killing. And in a letter to Biden, the family wrote, “Your administration’s actions can only be seen as an attempt to erase the extrajudicial killing of Shireen and further entrench the systemic impunity enjoyed by Israeli forces and officials for unlawfully killing Palestinians,” unquote. Now, yesterday, on Wednesday, U.S. Secretary of State Antony Blinken invited Shireen Abu Akleh’s family to visit the United States.

This is Shireen Abu Akleh’s niece Lina Abu Akleh responding to the State Department’s inconclusive findings after investigating the bullet that killed her.

AMY GOODMAN: Can you, Professor Khalidi, talk about the significance of what’s happening here? Biden will not be meeting with the Palestinian American journalist’s family, but Blinken has invited them to Washington.

There was a cover-up and a whitewash in order to guarantee Israel’s impunity and to make sure that there wouldn’t be any waves in the president’s visit to Israel, which is the key part of what he’s doing over these two or three days. He’ll pay a courtesy visit on the president elected 17 years ago and who has no legitimacy in Ramallah, but it’s really a visit to Israel. And so, this whitewash was intended, I think, to make it easier in terms of American-Israeli relations.

And what we’re seeing here is yet another example of what’s sauce for the goose is not sauce for the gander. If an American citizen is killed or detained, if an American citizen’s property is illegitimately taken, the United States government would normally do something about it. Here you have a case where a U.S. citizen was murdered, assassinated, according to every account by every investigation, The Washington Post, The New York Times — you mentioned several of them — and yet the U.S. government basically didn’t do an investigation, pretended that it did, and said the issue is closed. Now, Blinken has generously offered to meet with the family. It’s up to the family to respond to that. But the United States government has already taken the steps necessary to cover this up and to make sure that relations with Israel are not harmed.

I think what should be demanded, in every case, is justice for U.S. citizens, as you would demand such justice anywhere else in the world. This is yet another American citizen killed by Israel. Rachel Corrie was murdered by an Israeli bulldozer. An aged Palestinian American died in Israeli custody when they shoved him in the mud, and he had a heart attack, under detention with his hands tied behind his back in the West Bank about nine months ago. So this is the third American citizen that we know about killed by the Israelis about which the United States has done absolutely nothing. I don’t think that if that happened in the Ukraine or if that happened somewhere else, we would see quite the same willingness to extend impunity to the government that was responsible for these actions.

AMY GOODMAN: Well, it’s interesting we are just about to go to Sarah Leah Whitson of DAWN to talk about this unprecedented trip, you know, the first U.S. president to fly from Israel to Jeddah, Saudi Arabia, the country where the Prince Mohammed bin Salman has been directly implicated in the killing of The Washington Post columnist Khashoggi. So, you go from Shireen Abu Akleh to Khashoggi.

RASHID KHALIDI: There’s a pattern there: American citizens can be killed with impunity by regimes that the United States wants to stay on good terms with. That’s what’s happening in Israel, and that’s what’s going to happen in Saudi Arabia.

AMY GOODMAN: Rashid Khalidi, we want to thank you for being with us, Edward Said professor of modern Arab studies at Columbia University, author of a number of books, including The Hundred Years’ War on Palestine.

After Israel, Biden will head to Saudi Arabia, despite his campaign pledge to make Saudi Arabia a “pariah” for the state-sponsored killing of The Washington Post columnist Jamal Khashoggi. We’ll go to Sarah Leah Whitson of DAWN, a co-plaintiff with Khashoggi’s fiancée in a lawsuit against the Saudi Arabian crown prince. Stay with us. 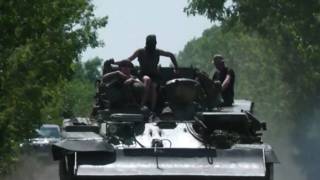