We speak to Walden Bello, the longtime Filipino activist and former vice-presidential candidate. He was arrested Monday on “cyber libel” charges, which he says was just a tactic by the new administration to suppress his vocal criticism of them. The arrest took place just weeks after the inauguration of Ferdinand Marcos Jr., the son of the former U.S.-backed dictator. Bello says people are “worried that this is a foretaste of things to come. … They don’t respond to criticisms. Instead, they use the law and they use instruments of intimidation to silence you.”

AMY GOODMAN: This is Democracy Now!, democracynow.org, The War and Peace Report. I’m Amy Goodman, as we end today’s show in the Philippines, where we’re joined by Walden Bello, the longtime scholar and activist who ran for vice president of the Philippines earlier this year. On Monday, Walden Bello was arrested on “cyber libel” charges, in what was widely viewed as a politically motivated case.

Walden’s arrest comes just weeks after the inauguration of the Philippines’ new president, Ferdinand Marcos Jr., the son of the former U.S.-backed Filipino dictator Ferdinand Marcos, who brutally ruled the Philippines for two decades, from '65 to 1986, when he was overthrown in the People Power Revolution. The Philippines' new vice president is Sara Duterte, the daughter of former President Rodrigo Duterte, whose so-called war on drugs killed tens of thousands of people.

The charges against Walden Bello stem from comments he made about a member of Sara Duterte’s campaign. On Twitter, Walden Bello wrote, “These people are mistaken if they think they can silence me and suppress my exercise of free speech.”

Well, Walden Bello is joining us now from Manila.

Welcome back to Democracy Now! Describe what happened to you on Monday.

WALDEN BELLO: Well, thank you very much, Amy, for inviting me. And I think, you know, that it’s very important to talk about the weaponization of the law in order to intimidate people who exercise their free speech.

I was basically at home on Monday afternoon. And the police came in and served me the warrant of arrest, that had been issued a few hours earlier in the southern city of Davao, which Mayor Duterte used to be the head of, and it was transmitted to Quezon City here. And so, it was — we had been waiting for the warrant for weeks. But we didn’t expect the speed, within one day, that the warrant would be issued in Davao, which is several hundred miles away, and issued here to me in Manila.

So, I was brought to the police station. And it was too late to post bail. And people said that that was deliberate, to make me spend a night in jail. And the next day, the bail for two counts of cyber libel was posted, nearly about — coming to nearly about slightly under $2,000. And I was released late afternoon on Tuesday. So, that’s sort of a blow-by-blow account of the 24 hours from my arrest to my release.

AMY GOODMAN: Can you talk about the cyber libel law that was passed in 2012?

WALDEN BELLO: Well, you know, it’s a law that is very broad in terms of its application, you know, to and implications for free speech in this country, in the sense that it criminalizes libel. So, libel is no longer just a civil charge which can be settled through negotiations and through, you know, cash in order to be able to settle a case —

AMY GOODMAN: And, of course, libel —

WALDEN BELLO: — but it criminalizes —

AMY GOODMAN: — what they’re using in — for example, in your case, you had questioned then-fellow vice-presidential candidate Sara Duterte’s record as Davao City mayor, claiming the city has become the drug-smuggling center of the south. So, this kind of political criticism, they then cast as cyber libel?

WALDEN BELLO: No. Well, let me explain. There were certain remarks that my social media team had posted on Facebook that asked Mayor Duterte if she was aware that her press information officer, a person named Jefry Tupas, was in a party in which drugs were flowing and where people were arrested, but he was not arrested. So, it was in the context of a political debate in which I was raising issues regarding her performance as mayor, because that would have an implication for people to assess her record, if she was really capable of being vice president, because I was — she and I were running for the same position. So, the person that was referred to as having been that party was strictly incidental to the fact that it was raised in the context of my questioning her record, not only with respect to that person’s presence, but also infrastructure and, as you said, the reputation of Davao City, of which she was mayor, as a drug center. So, because of that, you know, they launched this cyber libel case against me.

AMY GOODMAN: Now, Walden, Sara Duterte, now the vice president of the Philippines, said in a statement Tuesday that she did not play a role in your arrest. She said, “I have never filed a libel case in my life.”

WALDEN BELLO: Well, nobody believes that. I mean, it was fairly clear that she is the prime motivator of this.

And I was trying to say, you know, that in response to my calling her out to participate in a debate, because that’s really what people running for public office do, they not only pushed — her camp not only pushed this cyber libel case, the City Council of Davao City declared me persona non grata, and I was also labeled by her camp as a narco politician. So, you see, the pattern is that they don’t respond to criticisms. Instead, they use the law and they use instruments of intimidation in order to silence you. And this is exactly what’s happening right now.

You know, the idea that she is not engaged in this, nobody believes that. I mean, the person was her press information officer. Because of public criticism, she fired him, you know, after he was found at the drug party, so there was an element of admission that he had done something wrong. And then, when he became — when she became the vice president and head of the Department of Education, he is now back. This person is now back as her press relations officer and head of her media office. So, basically —

AMY GOODMAN: So, Walden, before we go, I want to make sure —

WALDEN BELLO: Yes. Let me just say that people are really, really quite worried that this is a foretaste of things to come, because just a few weeks after the new government was inaugurated, there is this effort to intimidate the opposition by filing this cyber libel case. And by the way, my case must be seen in the context of thousands of cyber libel cases — I think the estimate is 4,000 — that have been launched by politicians against their opponents over the last few years. The most prominent, of course, is the way that the father of Sara Duterte had cyber libel cases filed against Maria Ressa, the head of Rappler, who won the Nobel Prize, incidentally. But I guess what people are now saying is that, you know, it’s only been a few weeks, and they’re showing their fangs at this point in time. And that’s true.

I think that this was, of course, aimed at me, but the implications are much larger. And I am being made an object lesson of what can happen if somebody dares to criticize a person in high office, somebody in high office in this administration. So, I think, Amy, this is the reason why this has sparked so much domestic outrage, as well as international outrage, because people really feel that this weaponization of the law, like the cyber libel, is something that has become the modus operandi of this heads of government and officials that really do not like criticism.

So, you know, the people that you talk to, throughout the whole range of the society here, throughout the opposition, they have come together on this case, because they know that if they win this case, if the administration wins this case in the judiciary — and it’s likely that it will win this case because it has very strong control over the judiciary — then people really feel that democratic rights are in very grave danger. That is what is at stake here at the moment. And I think people see it, which is why they’ve come together to demand that the administration, the secretary of justice at this point, just drop this charge against me.

That does it for our show. Democracy Now! is currently accepting applications for a people and culture manager. Learn more and apply at democracynow.org. 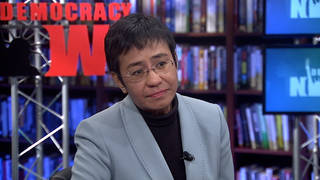