We speak with one of the reporters who this week exposed the secretive Chicago industrial mogul who has quietly given $1.6 billion to the architect of the right-wing takeover of the courts — the largest known political advocacy donation in U.S. history. The donor is Barre Seid, who donated all of his shares in his electronics company, Tripp Lite, to the nonprofit group run by Leonard Leo, who helped select former President Trump’s conservative Supreme Court nominees. “This transaction was all structured in a way that really gamed the rules around donations to nonprofits,” says Andrew Perez, a reporter for The Lever, who co-authored an exposé about Seid headlined “Inside The Right’s Historic Billion-Dollar Dark Money Transfer.”

StoryApr 03, 2014“The Next Citizens United”: McCutcheon Opens Floodgates for 1 Percent to Spend Millions on Campaigns

AMY GOODMAN: This is Democracy Now! I’m Amy Goodman, as we end today’s show looking at how an ultrasecretive Chicago industrial mogul has quietly given $1.6 billion to the architect of the right-wing takeover of the courts, the largest known political advocacy donation in U.S. history. In a stunning exposé, ProPublica and The Lever have revealed how Barre Seid, a 90-year-old conservative industrialist from Chicago, has given his fortune to a nonprofit run by Leonard Leo, the co-chair of the Federalist Society. Leo has played a key role in helping Republicans reshape the federal judiciary. He’s been described as Donald Trump’s “Supreme Court whisperer” for his role in pushing for the nomination of Justices Amy Coney Barrett, Brett Kavanaugh and Neil Gorsuch.

We’re joined now by Andrew Perez, senior editor and reporter at The Lever. He’s the co-reporter, along with ProPublica’s Andy Kroll and Justin Elliott, on this new exposé, “Inside The Right’s Historic Billion-Dollar Dark Money Transfer.”

You know, it’s difficult to even find pictures of Barre Seid online. Tell us about this historic money shift.

ANDREW PEREZ: Sure. Thanks for having me.

So, what we’ve reported is on how Barre Seid, a pretty unknown businessman from Chicago, donated his — really, his entire business empire to a nonprofit run by Leonard Leo, and which then sold the company, which was called Tripp Lite, for $1.6 billion. You know, we believe it’s the biggest-ever donation to a politically oriented dark money group in U.S. history. And the way this transaction was designed, it shielded Seid from paying roughly, we believe, up to $400 million, which then became a public subsidy, effectively, for this nonprofit, this conservative advocacy group run by Leonard Leo, the man who, as Trump’s judicial adviser, successfully flipped the Supreme Court and helped build a conservative supermajority there that just recently overturned federal protections for abortion rights.

AMY GOODMAN: So, talk about his company, how you got this tip, and what it means, this transfer of wealth.

ANDREW PEREZ: Sure. So, this company is called Tripp Lite. It’s an electronics manufacturer. They make, like, surge protectors and equipment that are sold for both kind of at-home use and then also commercial, like data centers. And we learned about this just from a source who provided us documents detailing the transaction, just showing how Seid managed to build an unprecedented war chest for, you know, an already highly successful conservative operative.

AMY GOODMAN: So, Barre Seid, whose name is spelled, what, B-A-R-R-E S-E-I-D, has donated over the years. Talk about his role in distributing DVDs titled Obsession: Radical Islam’s War with the West during the 2008 presidential election.

ANDREW PEREZ: Yeah, he was believed to be the donor. And actually, the reporter on that story worked with me on this one, Justin Elliott. He was believed to have donated $17 million to this group called the Clarion Fund that distributed those DVDs, this really Islamophobic campaign, during the 2008 campaign. You know, his team always kind of denied that. They’ve always worked very hard to donate money behind the scenes. What we’ve learned is that he is both — has become exceedingly wealthy. He was earning up to $150 million a year in recent years, mostly from Tripp Lite. And he was also giving, behind the scenes, just a pretty massive amount of money. He donated, between 1996 and 2018, we believe, around $775 million. He claimed that much in charitable deductions, so the number could be actually higher than that.

AMY GOODMAN: So, The Washington Post reported George Mason University Law School changed its name to the Antonin Scalia Law School due to a $10 million donation from the Charles Koch Foundation and a $20 million grant from an anonymous donor, and that the name change was a condition of the anonymous donor’s gift. The activist group UnKoch My Campus later discovered the anonymous donor was Barre Seid. Talk more about what he has done, and what this means to work with Leonard Leo.

ANDREW PEREZ: Yeah. Well, so, we believe he was that donor who funded the name change at the George Mason University Law School. And that gift was apparently coordinated by Leonard Leo. We know that their relationship, their professional relationship, stretches back at least a decade. They served on a small Chicago charity together, on the board of that organization, which Seid had funded, as well. You know, we also know that Seid has been — or, we believe that he has been a big donor to the Heartland Institute, which is a kind of climate denial — infamous climate denial group. But, you know, this is still the clearest indication of his giving and the immense amount of trust that he has in Leonard Leo. You know, he put really his entire business fortune in the hands of Leonard Leo to deploy at his discretion.

AMY GOODMAN: Who has changed the shape, the face of the federal judiciary, not to mention the Supreme Court. Now, your news organization, The Lever, and ProPublica obtained a photo of Barre Seid that shows him as a 14-year-old walking with other students at the University of Chicago. He was among a group of high school sophomores admitted to the university through an accelerated undergraduate program. Talk about the possible impact of the Chicago school of economists on his thinking, and also about the — what — Seid dodging up to $400 million in state and federal income tax. From your piece, you write, “Seid transferred Tripp Lite to the Marble Freedom Trust, a nonprofit that is exempt from income tax” — federal income tax — “before the electronics company was sold. As a result, lawyers say, [he] avoided up to $400 million in state and federal income tax, preserving those funds for Leo’s [new] operation.”

ANDREW PEREZ: Yeah. Well, so, Barre Seid is quite old. He’s 90 years old. And so, he actually attended the University of Chicago, like, back right around the start of the Chicago school. We do understand that he’s a pretty big fan of Milton Friedman. But, you know, so this transaction was all structured in a way that really gamed the rules around donations to nonprofits, donating appreciated property. If he had sold this company for $1.6 billion, he probably would have owed up to $400 million. By structuring it this way, by having the trust sell the company, it saved him a pretty hefty tax bill, and it also then really preserved the amount of money that would be available for Leonard Leo’s new group. And, you know, I should stress that this money all came after his network and Leo had successfully remade the Supreme Court, building a conservative supermajority there. So this is all money that can really be used towards the future, towards building and expanding the conservative movement

AMY GOODMAN: We have five seconds. Why do you think it’s critical the public know?

ANDREW PEREZ: I mean, we think that the public should know, you know, all of these donations, these — like, all donations to dark money groups.

AMY GOODMAN: Andrew Perez, we’re going to leave it there. Thank you so much. We’ll link to your piece. 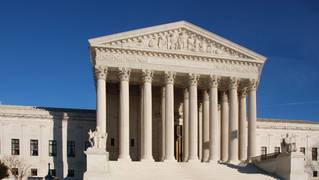