When the Inflation Reduction Act passed the Senate Sunday, Republicans successfully blocked a price cap on insulin. Robert Weissman, president of Public Citizen, says that despite its flaws, the bill is a win against the pharmaceutical industry’s exploitative profits. “They’re super worried that this is a break in the dam and that it will lead to more negotiation, once we, the American people, see plainly the cost savings that are available,” says Weissman.

JUAN GONZÁLEZ: And, Robert Weissman, to get to the big news this week, which was the Senate’s passage of the Inflation Reduction Act, you’ve called this a “very good legislative package. When enacted, it will make America a better place.” Could you lay out some of the key provisions of this act? I was a little skeptical about the issue of Medicare negotiating drug prices, because it only involves right now, as I understand it, 10 drugs of the thousands that are out there, and even those, the negotiations, the actual prices won’t increase until — won’t be capped until 2026, as I understand?

ROBERT WEISSMAN: Yeah, that’s right. I think for the overall package, I think it is a very positive bill. And I think that the key elements are in there, which are to lower and cap drug prices for seniors, expand health insurance subsidies for people, raise taxes on corporations and take important measures to deal with the climate crisis. They’re significant. And they wouldn’t have happened absent movements across the country and the Bernie Sanders campaign, which forced them on the agenda and forced them through the Congress.

That said, there are absolutely — there are limitations to all the good things that are in there. There are flaws with each element that’s in there. And in this case of the climate and energy portion of the bill, there are some affirmatively bad things in there.

So, in the case of drug pricing, for example, you’re absolutely right. When it comes to Medicare negotiation, as you know, Medicare is forbidden by law from negotiating the price of the drugs that it pays for for seniors. That was put in there by a representative named Billy Tauzin in 2005, shortly before he left the Congress and went over to be head of the Pharmaceutical Trade Association, Pharma. It was one of the most corrupt moments in American history. It’s cost Americans hundreds of billions of dollars since 2005, and even more going forward.

But even that will save American people about $100 billion over 10 years, and has got Pharma, the industry, up in arms, because they don’t lose in Congress ever. And they are super worried that this is a break in the dam and that it will lead to more negotiation, once we, the American people, see plainly the cost savings that are available. So, it is very limited, but also very important.

AMY GOODMAN: Well, we’re going to continue to look at the Senate bill, the sweeping $739 billion bill to address the climate crisis, reduce drug costs and establish a 15% minimum tax for large corporations, with Rob Weissman of Public Citizen. We’ll also be joined by Indigenous land offender Tara Houska and then Bishop William Barber. Stay with us. 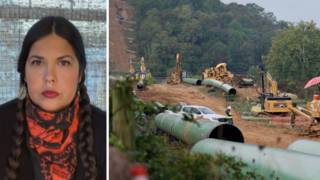