Nearly 1,500 people have died and tens of millions have been displaced in Pakistan, where catastrophic flooding has left a third of the country underwater, washing away homes, farmlands, bridges, hospitals and schools. “People have lost everything,” says Zulfikar Ali Bhutto, a Pakistani artist and the grandson of Pakistan’s former Prime Minister Zulfiqar Ali Bhutto. Bhutto says the flooding has caused an epidemic of malaria and dengue fever, and calls on the International Monetary Fund to cancel the country’s debts and commit to climate reparations.

Nearly 1,500 people have now died in Pakistan, where catastrophic flooding has left a third of the country underwater. The dead include 530 children. Tens of millions have been displaced by the floods, which washed away homes, bridges, hospitals, schools, while destroying massive amounts of farmland. On Wednesday, U.N. Secretary-General António Guterres issued another dire warning about the climate emergency, days after he returned from Pakistan.

SECRETARY-GENERAL ANTÓNIO GUTERRES: What is happening in Pakistan demonstrates the sheer inadequacy of the global response to the climate crisis, and the betrayal and injustice at the heart of it. Whether it is Pakistan, the Horn of Africa, the Sahel, small islands or least developed countries, the world’s most vulnerable — who did nothing to cause this crisis — are paying a horrific price for decades of intransigence by big emitters.

AMY GOODMAN: Pakistan estimates about 30 million people have been displaced by the floods. This is a mother from Pakistan’s Sindh province named Ayesha Arbelo, who gave birth last week after being forced to flee her home.

AYESHA ARBELO: [translated] The flood came to our village, and it swept away everything. I felt labor pains, and my father brought me here to the evacuee camp on a motorcycle. The labor pains continued, and then my father took me to a hospital, where I had to undergo a C-section to deliver the baby. … Sometimes we don’t have food for two days. I don’t have milk to breastfeed my child. I am sick, and my child is also sick. I have now got medicine from the hospital. God willing, my child will be all right now.

AMY GOODMAN: We go now to Karachi, Pakistan, where we’re joined by Zulfikar Ali Bhutto, a Pakistani artist whose work centers on the Indus River, recently traveled across his home province of Sindh to witness the devastation caused by the floods. He’s named after his grandfather, the former Prime Minister Zulfiqar Ali Bhutto.

Welcome to Democracy Now! Can you talk about this journey you took and what you found? This is just hard to fathom. A third of your country is underwater right now.

ZULFIKAR ALI BHUTTO: Thank you so much for having me on the show.

Yes, it’s incredibly overwhelming, just the thought of it, but even the sight of it. I had to go see it to believe it. When the catastrophe started, well, really, the monsoons started in June, and they just didn’t stop. So, by early August, I was getting calls from southern Punjab and Balochistan from people who were just desperate, and they needed — and they needed help, and I wasn’t quite sure how to provide that help. And then calls came from my own house, our own ancestral home, our own ancestral village in Larkana. So, of course I went.

NERMEEN SHAIKH: Zulfikar, could you describe what the conditions are now? I mean, there are not only concerns about, obviously, the fact that so many people’s lives have been devastated, homes destroyed, people forced to flee, but also now there’s so much water that’s just standing that there are concerns about the spread of diseases like malaria and dengue.

ZULFIKAR ALI BHUTTO: Malaria and dengue, there is already what I think we can call an epidemic. Many, many people are getting sick from malaria and dengue. As you maybe know, dengue has no cure; you simply have to weather it out. Malaria does have a cure, but there is also no supply locally of malaria medicine. So we’ve had to go and set up medical camps to deliver malaria medicine to people, to deliver chlorine tablets because the water is so putrid and polluted. One of the immediate effects of the flood was, in fact, gastroenteritis. That was probably within the first few days. Fungal diseases were in the first few days, as well.

You know, children — malnourished children are not able to heal and recover quickly from skin diseases, and that was something we noticed, as well, is that not only were there waterborne diseases happening, and sewage was mixing with drinking water, but there were already preconditions, such as malnourishment, present within our society, that was actually preventing a lot of these children from naturally healing.

AMY GOODMAN: Zulfikar, according to the Global Climate Risk Index last year, Pakistan ranked eighth among countries most vulnerable to the climate crisis, despite contributing less than 1% to global carbon emissions. Can you talk about the issue of climate reparations and the connection of what’s happening to the climate catastrophe around the world?

Now, the idea of reparations, of course, the most reparative measure would be to cancel Pakistan’s debt. Pakistan owes a huge debt to the IMF and World Bank, as well as various other countries, who have funded huge megaprojects, such as dams and barrages, that have actually exasperated the situation and stopped the rivers’ natural flow and stopped the natural flow of the mountains. They have also funded highways and bridges that have done the exact same thing. Fifty dams — more than 50 dams have actually broken during these floods, resulting in even more catastrophe. And we owe these people debt.

Now, in terms of reparations beyond that, we have to think about: Is the Pakistani government accountable? Can the Pakistani government be held accountable? Where will these reparations go? Will they go into the hands of the 30-plus million people who have been displaced, or will they simply go back into the system that exacerbated this situation? There’s been some talk of debt swap, that the IMF should fund infrastructural projects just to help the country. But the IMF’s infrastructural projects have been historically — both within Pakistan and outside of Pakistan, their projects have been anti-poor, anti-nature, anti-Indigenous and anti-people. So, I wonder if they’ve had a change of heart. And if they have, maybe that is a solution to this climate reparations discussion.

NERMEEN SHAIKH: I want to ask about the crisis, the worsening crisis, in Pakistan’s healthcare and medical facilities as they try to cope, under these horrific conditions, with increasing numbers of people seeking help. Patients in makeshift hospitals have been getting sick from a lack of drinking water.

ZULFIKAR ALI BHUTTO: Yes, that’s the primary concern. When we go and we think, “OK, let’s bring medicine,” we also have to think, “OK, now we need to also bring water,” because there’s no safe drinking water.

So, there’s — and, of course, there’s the human tragedy of it all. So, people have lost everything. And in order to deliver medicine, they need water to take that medicine. So this is also a challenge that many, many people are facing right now.

NERMEEN SHAIKH: Say who exactly is providing the most assistance. I mean, we hear about the Pakistani military, which, of course, is vastly overfunded and the most powerful institution there. But what about — first of all, what exactly are they doing? And compare what they’re doing now compared to what they did during and after the 2010 floods. And what about NGOs that are working in the country?

ZULFIKAR ALI BHUTTO: Yeah. Well, you know, the Pakistani military, I have to say, was quite late to respond, though they were probably out of — if we’re talking about the difference between government and military, they were definitely the first of the two. I remember seeing the military on my fourth day while I was there in Larkana. That’s not to say that they were not there, but that was the day that they were most visible. And that was when the clouds had cleared a bit and the rain had gone away.

The military was much more active in 2010, which was another record-breaking flood. These floods have, of course, broken that record, as well. And that flood in 2010, as catastrophic as it was, was actually easier to manage, because it was primarily glacial melt, so you could predict where the water was coming from as it flowed north to south to the Arabian Sea. In this case, it’s not the same. We have — glacial melt actually happened after rainfall. So, the scope was really overwhelming.

In terms of NGOs, there is definitely a very large presence of NGOs, but they themselves are spread very thin. You have organizations such as Legal Aid Society, which is in fact what it says, a legal aid society, is going from legal work to going on boats and distributing rations or food to people who cannot be accessed. And there’s also a law in Pakistan which limits NGOs and that has actually banned several NGOs. So a lot of NGOs that might be able to take up the labor of doing this have not been able to. One NGO —

AMY GOODMAN: It may shock people to know that there’s more glacial ice, more glaciers in Pakistan than any place on Earth, outside of the polar region.

AMY GOODMAN: And in 10 seconds, Zulfikar, if you could comment on your being critical of the IMF for bankrolling massive dams and barrages that have broken during this flooding?

ZULFIKAR ALI BHUTTO: You know, as you said, the glaciers are Pakistan’s water storage. And there’s been this idea that water should not go to the sea. But what happens when water does not go to the sea is that it does not reach the people of the sea. And the first climate refugees in Pakistan were, in fact, those in the 1960s who had to flee the delta when it dried when the IMF —

ZULFIKAR ALI BHUTTO: — when the IMF built Kotri Barrage. So the IMF has been responsible for a great deal of our water stress.

AMY GOODMAN: Zulfikar Ali Bhutto, we have to end it there. I thank you so much for being with us. I’m Amy Goodman, with Nermeen Shaikh. 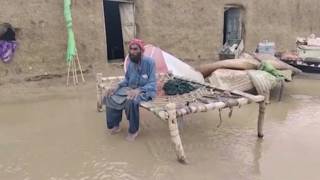