The vote for a new UN Secretary: US opposition to the section of Boutros Boutros-Ghali

Segment Summary:
Phyllis Bennis discusses UN Secretary General Boutros Boutros-Ghali’s desire to seek a second term in the office, an effort in which he is supported by 14 of the 15 Council members. The United States offers the only opposition, criticizing Boutros-Ghali’s effectiveness in promoting key policies, despite his general support of US-sponsored reforms. Speculation is that the US objects to Boutros-Ghali’s tendency to challenge their objectives, as well as his vocal criticism of the focus on the situation in Bosnia at the expense of other conflicted areas such as Somalia. Bennis predicts that Ghana’s Kofi Annan in the front-runner as a possible replacement, as well as pointing to the lack of viable female candidates from Asia/Africa.

StoryOct 21, 2022Egypt’s Carceral Climate Summit: Naomi Klein on the Crisis of COP27 Being Held in a Police State 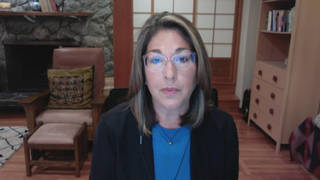 Egypt’s Carceral Climate Summit: Naomi Klein on the Crisis of COP27 Being Held in a Police State