In northeastern Arizona, in a region known as Big Mountain, hundreds of Navajo Dineh families are facing imminent eviction from their land and livelihoods. For nearly 25 years, the Dineh have fought an alliance of energy companies, the US government and sectors in another tribe for control over the coal rich land that they’ve lived on since before the arrival of Columbus.

Already 12,000 Navajo have been uprooted since the early 1970s and now the remaining 2,000 Dineh residents face a deadline of today to sign a draconian lease or face eviction.

Here to discuss the crisis at Big Mountain are Bonnie Whitesinger, a traditional Navajo Dineh from the region and Marsha Monestersky, who has been organizing at the United Nations and elsewhere in support of the Sovereign Dineh Nation’s fight against relocation. 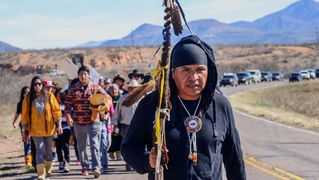