The Bush Administration’s delegation to East Timor’s independence celebration will be led, ironically, by former President Clinton and former UN Ambassador Richard Holbrooke, two men deeply involved in supporting Indonesia’s occupation of East Timor. President Clinton offered military support for Indonesia throughout his eight years in office, waiting until Indonesia’s army had burned East Timor to the ground before finally cutting off military ties. Richard Holbrooke, who was US Ambassador to the UN at the time of East Timor’s historic 1999 vote, was also the State Department officer in charge of East Asia when Indonesia invaded East Timor in 1975. Amy Goodman had a chance to question then Presidential candidate Bill Clinton about U.S. policy toward Indonesia and East Timor in 1992, while Allan Nairn had a chance to question Richard Holbrooke at Brown University in May 1997.

In 1994 Allan Nairn and Amy Goodman also had a chance to question former Secretary of State Henry Kissinger, who along with Gerald Ford gave the green light for Indonesia to invade East Timor in 1975. This was the first time Kissinger had ever spoken publicly about his role in supporting Indonesia’s invasion.

The original content of this program is licensed under a Creative Commons Attribution-Noncommercial-No Derivative Works 3.0 United States License. Please attribute legal copies of this work to democracynow.org. Some of the work(s) that this program incorporates, however, may be separately licensed. For further information or additional permissions, contact us.
NEXTA Former State Department Official in Jakarta Discusses the Bush Administration’s Attempts to Restore Military Aid to Indonesia 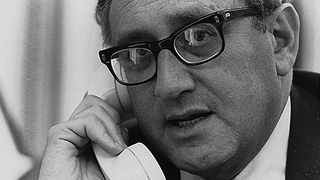 With a Record Backing Coups, Secret War & Genocide, Is Kissinger an Elder Statesman or War Criminal?