StoryDec 19, 2022Judge Orders Philly DA to Disclose All Evidence in Mumia Abu-Jamal Case. Could It Lead to New Trial?

PAM AFRICA: Yes, Amy, you know, the governmental terrorism that is happening here is unbelievable. The breaking in of my office where computers was taken and everything that they could not move, you know, they completely destroyed. The terrorism of what’s happening with, you know, Angus Love. On December 13, we are having a program making a call to order. Enough is enough. We have proven beyond anybody’s reasonable doubt that Mumia Abu-Jamal was innocent of killing police officer Daniel Faulkner. And on December 9, Mumia was brutally beaten; he was shot, and the only reason why he is in jail (inaudible) crime. We are asking people, you know, who are fed up with what’s happening, the injustice to Mumia, and you know and other people to join us in Philadelphia at Benjamin Franklin High School at 1:00 for an indoor program. There’s a march that’s starting earlier from — at 10:00 coming from 7th and Fairmont in Philadelphia. You know, Amy, you know, we really, really need more time you know, to talk about the governmental conspiracy on what’s happening here and dealing with Mumia’s case. Because breaking in of my office is one thing, but the beatings, the jailings, and even murder has happened in Mumia’s case, which is not being actually — you know, told here, you know, so that people can understand the conspiracy, you know, people are writing books. There’s misinformation in the books. Michael Moore’s book is one. We’re not finished dealing with the issue of Michael Moore. We have got to — you know, get an apology from Michael Moore in dealing with the segment that he put in his book where he said that Mumia probably killed police officer Faulkner. What it stated was that, you know, he — it was just — he was just being flip. You cannot be flip with a man’s life. Today marks 22 years in a campaign to kill Mumia, it’s escalating, and the campaign to free Mumia and all is — you know, is going down because of governmental terrorism. You know, but what we’re saying, enough is enough and it’s time for everybody to rise up, stand up, and deal with the facts in the case.

AMY GOODMAN: Pam Africa, you mentioned the Philadelphia attorney, Angus Love. Can you say what is happened with him right now?

PAM AFRICA: Right. I was listening to the radio this morning, and Angus Love, he signed a signature ad calling for a fair trial for Mumia. He also was one of the lawyers that defended the youth from the — the Republican convention here in Philadelphia, but the F.O.P. has taken up a campaign against him. He is running for Human Rights Commission — Civil Service Commission. They have actually taken up a campaign, you know, to stop him from getting this position based on the fact that he has signed a signature ad for Mumia, and has called for a fair trial and that he has gone out and spoken out against police brutality, you know, here in Philadelphia and across the United States.

AMY GOODMAN: Well, I want to thank you for being with us, Pam Africa, December 13th you will be having a broader discussion in Philadelphia about the case. I also want to say that we did call the Fraternal Order of Police yesterday to ask for a representative to be on the program, but they did not get back to us.

PAM AFRICA: Well, they wouldn’t get back with you because you are balanced and all to be fair.

AMY GOODMAN: On December 13, where is the event that you are having taking place?

PAM AFRICA: It will be in North Philadelphia at Benjamin Franklin High School. We have people coming in from all over. What we are doing, we are presenting the evidence. Mr. Arnold Beverly will be present, Terry Carter-Maurer who is the stenographer who stated that she overheard (Judge)Sabo saying that he was going to see to that they execute Mumia, Veronica Jones and there will be a whole lot of other people. Aaron Paterson from Chicago, who was recently released by Governor Ryan, he’s coming in with Fred Hampton. Professor Dennis Brutis is bringing people in and also the great, great, great granddaughter of Frederick Douglas is traveling with a contingent coming in from Washington. So we hope to present the evidence and put a breath of air back into the movement for Mumia.

AMY GOODMAN: Pam Africa, I want to thank you very much for being with us, speaking to us, International Family and Friends of Mumia Abu-Jamal. That does it for the show. Democracy Now! produced by Mike Burke, Sharif Abdel Kouddous, Ana Nogueira, Elizabeth Press, Parvez Sharma, Jeremy Skahill, our web site is democracynow.org. If you’d like to get a copy of the show, 1-800-881-2359. I’m Amy Goodman. Thanks for joining us.

Judge Orders Philly DA to Disclose All Evidence in Mumia Abu-Jamal Case. Could It Lead to New Trial? 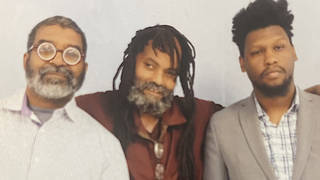 Judge Orders Philly DA to Disclose All Evidence in Mumia Abu-Jamal Case. Could It Lead to New Trial?