Hundreds of Thousands Mourn In Spain As Toll Rises to 198 Dead, 1,400+ Wounded

Schools, museums and the Central Bank have all been shut down as Spain began three days of mourning today after 10 bombs ripped through four trains in the space of just three minutes at the height of rush hour in Madrid. We go to Madrid to get a report from the streets.

In Madrid the death toll has risen to at least 198 in Thursday’s train bombings. Officials say 10 bombs ripped through four trains in the space of just three minutes at the height of rush hour.

At least 198 people were killed and over 1,400 wounded and the death toll is expected to rise with 60 of the wounded in a serious state. The harrowing task of identifying dozens of bodies is continuing more than 24 hours after the blasts. Newspapers in Madrid are describing the attacks as “Spain’s 9/11.”

Witnesses described scenes of horror with trains crushed like “cans of tuna” while mobile phones rang eerily from the pockets of the dead.

Spain has begun three days of mourning. Millions are expected to participate in rallies tonight to mourn the dead. Schools, museums and the Central Bank have all been shut down.

Spanish officials immediately assumed the Basque separatist group Eta was behind the attack. The group has previously targeted the Spanish railway system and two Eta suspects were arrested last month driving a truck loaded with more than 500kg of explosives headed for Madrid.

But evidence later emerged that forced officials to investigate a possible Al Qaeda role. First, a van was discovered near the train station, with detonators and Arabic material inside.

Then, an Arabic newspaper in London received a letter from a group with ties to Al Qaeda claiming responsibility saying, “We have succeeded in infiltrating the heart of crusader Europe and struck one of the bases of the crusader alliance.” But the letter was viewed with skepticism for the same group had also taken responsibility for last year’s massive black out along the East Coast.

Spanish editorial writers are demanding answers before voters go to the polls in Sunday’s general election, because the culprits’ identity might influence people’s choice of party.

The ruling Popular Party campaigned on a hardline stance against Eta, but it also defied popular opposition by supporting the U.S.-led invasion of Iraq–which many say could have triggered an attack by al-Qaeda.

The original content of this program is licensed under a Creative Commons Attribution-Noncommercial-No Derivative Works 3.0 United States License. Please attribute legal copies of this work to democracynow.org. Some of the work(s) that this program incorporates, however, may be separately licensed. For further information or additional permissions, contact us.
NEXTNo Bush Left Behind: When You’re Barred From Banking, Why Not Bank on Education? 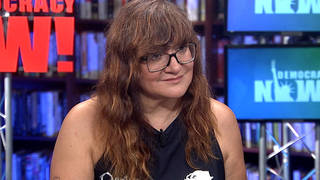