We take a look at Maricopa County Sheriff Joe Arpaio. Abuses and killings have been documented in his county’s notorious “tent-city” jail where detailed reports about deaths and riots are illegally withheld from public inspection. [includes rush transcript]

JOHN DOUGHERTY:Well, Arizona has had a notorious history of problems in the state prison system. It’s been going on for decades. Terry Stewart was a key player in creating a system down there that has become notorious. Stewart is now a key player in trying to privatize the prison system, and we have a number of state —- of private prisons that are starting to be built here in Arizona. And -—

AMY GOODMAN: Under his reign here, what, more than a dozen women were abused? — Well it came out publicly, however the actual number of women may be much more — were abused, raped, sexually assaulted by prison guards?

JOHN DOUGHERTY:It’s just — we’re talking the wild west. The situations out here in the state prison as well as the county jails are just absolutely abhorrent. You know, Amnesty International has come out here and blasted the county jails repeatedly for just being, you know, latter-day Abu Ghraibs.

AMY GOODMAN: Which brings us to the subject of Mr. Arpaio. Can you talk about the sheriff that you have written about extensively.

JOHN DOUGHERTY:Sheriff Joe Arpaio has been in power here now for 12 years. He’s won re-election two times. He’s looking like winning his third term; and he’s probably the most popular politician in the state of Arizona. This guy talks in, you know, two-sentence sound bites. He thinks he’s a latter-day John Wayne; and his philosophy is: 'If you've done — if you’ve been arrested, we’re going to take away your rights and throw you in jail. We’ll starve you, abuse you, beat you. We don’t care. Maybe you’ll get your chance to have a day in court and maybe you won’t.’ We have had a number of people killed in the jail systems awaiting trial, a number of them needlessly. Arpaio has gained tremendous amount of popularity with the electorate here by being so-called 'tough' on the prisoners. It’s out of control. Unfortunately, he was re-elected in the primary a couple of weeks ago. Although, it was the narrowest election he’s faced. He won, I think it was 57-43 over a retired police commander, Dan Saban who was endorsed by the Republican Party, by Senator McCain, by all the police, the firefighters in the state wanted to see Sheriff Joe go. Unfortunately, the — his propaganda machine, is very powerful and he’s been able to hoodwink the public into thinking they’re safer if he’s in there running basically a — a gulag at the county jail.

AMY GOODMAN: You can just remind our listeners and viewers what he specifically has done? We once interviewed Sheriff Arpaio of Maricopa County. Talk about some of his practices.

JOHN DOUGHERTY:The most famous thing is he known for is tent city. He created a big jail holding camp out in the desert where he packs in 30 people to a tent, and this is where people serve their terms instead of in a jail or a secure facility. They’re in tents. The Arizona Court of Appeals has found that these tent conditions are extremely dangerous; and in fact, they held Arpaio liable — personally liable — on a lawsuit a couple of months ago where a guy was beaten into a coma with a tent stake, an inmate. So he creates — this is a great prop. ’I’m going to pack everybody in tent city. I’m going to save everybody a lot of money.’ But what in fact he does is end up costing us millions and millions of dollars in lawsuits because people are beaten or killed inside these facilities that are completely insecure. And you got a problem with that aspect of it. There’s also been use of what he calls a restraint chair. We’ve had people killed in the restraint chairs inside the jail.

AMY GOODMAN: What is the restraint chair?

JOHN DOUGHERTY:Well, if somebody comes in and they’re unruly, instead of just locking them in the cell and just letting them blow steam, Maricopa County’s way of handling these people is send in a bunch of goons into the jail, drag the person out, strap them down in these — they look like medieval torture chairs — strap their legs and arms down and bend their head down and put a mask over their face (like the famous Abu Ghraib picture of the guy with the mask. That’s what they do. They call them spit masks.) They’ll strap them in there. In one instance Mr. Norberg died in the chair while they were pressing his head forward so hard he suffocated. While he was dying, the prison guards had a discussion about it. The people were saying: ’He’s — he’s not looking good. He’s turning blue’; and the response from one of the guards was an expletive like, 'Who cares?' That family sued, and Scott Norberg, his dad was — Scott Norberg just wasn’t another chump off the street that they could beat up and kill in the jail and nothing happened. His father was the corporate counsel for the largest utility in the state of Arizona. He ended up hiring one of the top attorneys in the southwest, Mike Manning, and they went in and sued. Maricopa county paid an eight million dollar settlement for a wrongful death to settle that case out of court to the Norberg survivors. There’s more examples after that. Arpaio told his minions that that is the standard that we want to have. Handling — the way we handled Scott Norberg was good. That’s the attitude that this guy is projecting throughout the Maricopa County Sheriff’s Office and the jail. It’s creating an extremely dangerous situation down there.

AMY GOODMAN: Which means he will win in the general election?

JOHN DOUGHERTY:Most certainly. This was the best chance to beat him, was in the Republican Primary. Republicans have 100,000 voter edge in Maricopa County. It’s going to be extremely unlikely that the Democrat — and it’s a three-way race, there’s an independent running as well — will defeat Joe Arpaio. He’s going to stay there for another four years. He’s 72 years old and he’s already said he wants to run again, four years from now to continue his reign. It’s interesting the things that I have been coming up with the last couple of months that have raised some serious questions in my mind is that the same time he’s been doing this, he also has a policy in which they serve rotten food, stale food. He’s able to brag to the public, 'Hey, we're sellin’ food — we feed prisoners for, I don’t know, twenty cents a day.’ Something like that, ridiculous. And it literally is rotten. But at the same time he operates a commissary in there and a series of vending machines, and he allows inmates to purchase these better food off there. We’ve been seeking now for three months the financial records that are associated with the commissary and the vending machines in there. I’m talking millions and millions of dollars rolling through these things. They’ve refused to do that. We have now filed suit with Maricopa county against the sheriff’s office to obtain these public records. At the same time, this guy has accumulated more than $2 million worth of real estate. It’s very interesting. How is he getting all of this real estate? We have asked him to present his real estate records. Those are sealed as well.

AMY GOODMAN: What did you ask him on primary night? It seemed that you had a bit of an altercation with the sheriff.

JOHN DOUGHERTY:Our point was simple. In Arizona there’s an Arizona public records law to obtain documents like most states have; and we’ve filed a number of public records request for financial documents or incident reports or people dying in the jail, or people staying over in a cushy jail in Mason in return for raising campaign funds. You know, things like that. Suspicious activity. They’ve sandbagged me for months on releasing normally available public records. Prior to primary night, I met his public information officer during a press conference and I asked her, 'When are you going to release the public records to us?' and she says, 'Never.' I said, 'Well, you can't do that.’ She goes, 'Sue us.' So when Arpaio won the primary, I said I’m going to go down there and ask him flat out: 'When are you going to release the public records?' As I approached him, I said, 'Joe Arpaio,' and he just looked at me and he said, 'I don't talk you to,’ and I said, 'When are you going to release the public records to us, sir? And he said to his bodyguards, ’Get rid of this guy.' And those guys just basically came up and started bumping me and pushing me away, and one person grabbed my arm like I was under arrest. So I just kept repeating the question.

AMY GOODMAN: Bending it behind your back.

JOHN DOUGHERTY:Yeah, they bent it around my back and they escorted me — well pushed me — out of the room, which was at the Phoenix Civic Plaza, it was a public space in a room leased by the Maricopa Department of Elections. That’s the attitude they have if they don’t like your question, ’We’re just going to ignore you, or we’re just going to shove you and throw you out the door.’

AMY GOODMAN: John Dougherty, I want to thank you for being with us. Staff reporter for the Phoenix News Times, an alternative news weekly based here in Phoenix. He has covered John McCain’s career for years as well as Arizona politics in general.

How the GOP and Dems Secretly Control the Presidential Debates

NEXTHow the GOP and Dems Secretly Control the Presidential Debates 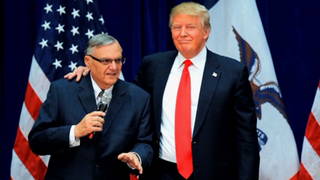