During the COVID-19 pandemic, independent news is more important than ever. You turn to Democracy Now! because you trust that when we're reporting on this global crisis, our coverage is not brought to you by the fossil fuel, insurance or weapons industries or Big Pharma. We're bringing you stories from the front lines, and voices you simply won't hear anywhere else—but we’re counting on you to make it possible. Today, a generous supporter will DOUBLE your donation to Democracy Now!, meaning your gift goes twice as far. This is a challenging time for us all, but if you're able to support Democracy Now! with a donation, please do so today. Stay safe, and thank you so much.
-Amy Goodman

During the COVID-19 pandemic, independent news is more important than ever. You turn to Democracy Now! because you trust that when we're reporting on this global crisis, our coverage is not brought to you by the fossil fuel, insurance or weapons industries or Big Pharma. We're bringing you stories from the front lines, and voices you simply won't hear anywhere else—but we’re counting on you to make it possible. Today, a generous supporter will DOUBLE your donation to Democracy Now!, meaning your gift goes twice as far. This is a challenging time for us all, but if you're able to support Democracy Now! with a donation, please do so today. Stay safe, and thank you so much.
-Amy Goodman

Daniel McGowan was one of six environmental activists arrested last week in a series of coordinated raids across four states. He is accused of setting a pair of arsons in Oregon in 2001 and is being held without bail. [includes rush transcript]

Bail has been denied to all six environmental activists arrested last week in a series of coordinated raids in New York, Virginia, Arizona and Oregon.

The activists have been accused of setting a series of arsons in the Pacific Northwest between 1998 and 2001.

Daniel McGowan of New York and Stanislas Meyerhoff of Virginia are facing up to life in prison. They are accused of setting fires in 2001 at a lumber company and an experimental tree farm in Oregon. No one was injured in the blazes.

They are facing the most serious charges ever filed against environmental activists for allegedly taking part in such a direct action.

The four others arrested face between 20 and 25 years in prison for allegedly setting other fires. They are Chelsea Gerlach of Portland, Oregon. Kevin Tubbs of Oregon, Bill Rodgers of Prescott Arizona and Sarah Harvey of Flagstaff Arizona.

The FBI however has been accused of overzealously prosecuting alleged members of the movement. Last month the FBI agreed to pay an environmental activist named Josh Cannole $100,000 for mistakenly jailing him as a suspect in a string of arsons and vandalism at SUV dealerships in California.

AMY GOODMAN: We are joined in our New York studio by Daniel McGowan’s attorney, Martin Stolar, Executive Director of National Lawyers Guild. We’re also joined by McGowan’s long-time girlfriend, Jenny Simon, and we welcome you both to Democracy Now!

Marty Stolar, let’s begin with you. What are these charges? Do these come as a surprise?

MARTIN STOLAR: Well, they come certainly as a surprise, because Daniel McGowan was an up-front activist, an outspoken activist and a peaceful man, not somebody who would ever be involved in any kind of violent activity; and the charges, which let him face from a minimum of 30 years to a maximum of life in prison, come totally out of the blue; and the charges deal with events that took place almost five years ago, and they just beat the statute of limitations by filing this indictment in November. The activities that he’s alleged to have participated in took place in January of 2001 and May of 2001. The indictment covers a series of arsons and the use of an incendiary device to set the arsons in progress. Daniel, of course, is totally innocent. He insists that he is innocent. He has no apology for being the activist that he was.

AMY GOODMAN: Jenny, how did you find out he was arrested?

JENNY SIMON: I was at work, and I received a call from his co-worker. Basically, she said that three F.B.I. agents had come into their offices, and they went to talk to him, and then they took him away, and he just said, “Call Jenny.” So, they somehow tracked me down. I still don’t really know how, but that doesn’t matter, and she called me and let me know what happened. So, you know, obviously it was an extreme shock to me, and I immediately called his sister, because he’s very close with his sister. And I left work early to go home, and as I was approaching my building, there were two men outside my building. And I just kind of went up to my door as if I was just going to, you know, open it up, and they — one of them hung up the phone saying, “I think we got our search warrant.” So, I turned around and left because I just didn’t want to deal with that. So, I went home later that night, and our apartment had been searched, and a lot of things had been taken, and it was pretty much a mess.

AMY GOODMAN: What was taken?

JENNY SIMON: Both of our computers were taken. We have, you know, a room that’s kind of like our office, and our — you know, some of my own personal things were taken that had nothing to do with him, you know, photographs, audiotapes. He had a lot of 'zines and fliers; I'm sure those were all taken. A number of his books, I think, you know, around twenty-something of his books were taken. They pretty much just went through the whole place and just took whatever they wanted.

JUAN GONZALEZ: And, Martin Stolar, your reaction when you hear that the government has declared these groups as the primary domestic terrorist threat?

MARTIN STOLAR: It’s unbelievable. You know, the government claims that the E.L.F. and the A.L.F. are somehow sort of domestic terrorists; and yet, what they do is they wind up arresting people who are peaceful activists. And it is another example of how this administration has criminalized dissent. And it is really troubling. But the —

AMY GOODMAN: The bail being set?

MARTIN STOLAR: The bail being set was no bail. You know, I’ve been practicing as a federal criminal defense lawyer for over 30 years. I have never presented as strong a bail package as I presented for Daniel McGowan. Six members of his family on $1 million personal recognizance bond secured by $850,000 in property and stocks and bonds. That should be enough to secure the appearance of somebody; and yet, we had a magistrate judge in Brooklyn who said: 'Nope, that's not sufficient. We think that this young man would run away and bankrupt his entire family.’ His father, his mother, his two sisters, his brother-in-law, and Jenny, his companion, were prepared to sign on that bond and put their entire financial futures in jeopardy if Daniel ran away; and yet, no bail would be obtained, because the government stands up and says: 'This is somebody who is an eco-terrorist.'

AMY GOODMAN: We’re going to have to leave it there. I want to thank you both for being with us. We’ll certainly continue to follow this case. 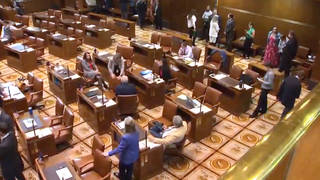