Trial of Irish Peace Activists Opposed to U.S. Military Use of Shannon Airport Begins in Dublin

The trial of five peace activists began Monday in Dublin, Ireland. The five were arrested on February 3rd, 2003 on charges stemming from an action at Shannon Airport–a civilian airport that has been transformed into a pit stop for the U.S military. They face up to 10 years in prison. We go to Dublin to speak with Ciaron O’Reilly, one of the activists on trial and Catholic Bishop Thomas Gumbleton. [includes rush transcript]

The trial of five peace activists begins today in Dublin, Ireland. Ciaron O’Reilly, Deirdre Clancy, Damien Moran, Karen Fallon and Nuin Dunlop–were arrested on February 3rd of 2003. They were arrested and face charges stemming from an action at Shannon Airport in Clare County. Shannon airport is a civilian airport that has been transformed into a pit stop for the U.S military. An average of 13,000 U.S. troops stop at Shannon Airport each month. On February 3rd–the activists–known as the “Pit Stop Ploughshares”–broke into a hangar at the airport, and damaged a US Navy war plane that was on its way to Iraq. They built a shrine with rosary and Islamic beads, a Koran a bible and photographs of Iraqi children. The activists face maximum sentences of up to 10 years imprisonment.

AMY GOODMAN: We’re joined now on the telephone from Dublin by Ciaron O’Reilly, who is currently on trial, joining us during a break in the trial. Welcome to Democracy Now!, Ciaron.

AMY GOODMAN: Can you talk about the trial today, what you did, and what you’re being charged with?

CIARON O’REILLY: Yeah. Today began with the 200 people walking into the court from the GPO, and [inaudible] were joined by Bishop Gumbleton of Detroit, Buddhist monks and members of the Iraqi community, as well as a lot of American anti-war activists who have come over to show solidarity at the trial, and British activists. Basically, today the jury was chosen, and the judge will be chosen tomorrow, and we will have court time until the 18th of March with a day off for St. Patrick’s Day on the 17th. So, the trial is now underway.

AMY GOODMAN: Can you talk about what you did on February 3?

CIARON O’REILLY: Yeah. The action was a Ploughshares action. Plowshares actions began in the United States in 1980 by Phil and Dan Berrigan and others. We are a pacifist movement. We made our way into Shannon Airport, that had become increasingly militarized over the previous 12 months before February, 2003, and made our way to a hangar, where a U.S. Navy warplane, a logistical plane, was housed. We took with us simple household hammers, one of them had been used in four other Ploughshares actions and had been kindly returned by the police force after each [inaudible] was either released or acquitted. And we began to disarm the plane. Now we’re charged with $2.5 million criminal damage, without reasonable excuse. We think our action was quite reasonable. Since our action, over 100,000 Iraqi people, mostly women and children, have been killed. Over 1,500 U.S. military personnel, most who would have passed through Shannon on their way to their deaths, have been killed. Of course, over 10,000 evacuated with serious injuries. So we feel that we did an act of conscience, that that was our judgment at the time, and we’re quite prepared to come into this court to speak to that.

AMY GOODMAN: So, are you not denying the charges that have been brought against you?

CIARON O’REILLY: The charges are $2.5 million U.S. in criminal damage, and I think $200 euros to the hangar’s window. We are hoping to call witnesses such as Kathy Kelly, who is with us from Voices in the Wilderness, who broke the sanctions on Iraq throughout the 1990s, and Gulf War veteran, Kelly Dougherty is traveling over, the recent Iraq war veteran. She also had evidence. And so, we’re hoping to put the war on trial. We have a website, warontrial.com, which will update people as the trial progresses.

AMY GOODMAN: Ciaron O’Reilly, I understand Bishop Gumbleton is standing next you to. If you wouldn’t mind putting him on the telephone?

AMY GOODMAN: Can you talk about why you are in Dublin right now, and not Detroit?

BISHOP THOMAS GUMBLETON: Because I’m here to support the Ploughshares people who tried to prevent the U.S. plane from delivering equipment and military personnel to Iraq. They’re opposed to the war there, and I have been very opposed to the war since 1990 and continue to try to do everything that I can to get the U.S. out of Iraq, and this is one more action in that direction.

AMY GOODMAN: What do you say to those who say they were involved in violent property damage?

BISHOP THOMAS GUMBLETON: Well, I think the long time answer to that has been, if you were in Germany in World War II, would you not have tried to stop the trains carrying people to the death camps or stop the chemicals from going there? And obviously, I think people wished they would have. So, sometimes in order to save life, you have to take property and prevent it from being misused.

AMY GOODMAN: The Plowshares activists in this country hardly get any national network or mainstream media attention when they’re tried for their actions. What kind of coverage is there right now of this Pitstop Ploughshares trial?

BISHOP THOMAS GUMBLETON: Well, it was pretty impressive this morning. When I got here, there were a number of news people here. I have done probably four or five interviews already for Catholic papers, but also for the Times, The Irish Times, and a radio program also. And so, I think it isn’t something that is, while disregarded as much as perhaps it is in the States, here it’s maybe making better news.

AMY GOODMAN: Could you put Ciaron O’Reilly back on the phone, Bishop?

AMY GOODMAN: And thank you for joining us, Bishop Gumbleton of Detroit.

BISHOP THOMAS GUMBLETON: Yes, sure. Thanks for covering.

AMY GOODMAN: Thank you. Standing in solidarity with the Ploughshares activists in Dublin on trial today. Ciaron O’Reilly is one of those activists who is on trial. Ciaron, are you with us?

CIARON O’REILLY: Yes, I am now.

AMY GOODMAN: Last question. This is not your first Ploughshares action. Can you talk about what you did on the eve of the Persian Gulf War?

CIARON O’REILLY: Yeah. On New Year’s Day, 1991, which is actually in the Catholic tradition the World Day of Peace, myself , Sue Frankel-Streit from the Washington, D.C. Catholic Worker and Moana Cole from New Zealand made our way to Griffiss Air Force Base and managed to disarm a B-52 bomber that was on 20-minute scramble alert, and put it out of action for the next two months when the killing spree of Iraq occurred. It’s nice to know that Griffiss Air Force Base today is free of all weapons, and I think Woodstock 1999 happened there. So we went to prison for 13 months, and then I was put to more traditional punishment on transportation to Australia, I was deported from the States. In 1998, I was part of a Ploughshares community that went to a new uranium mine in Australia and disabled uranium mining equipment. We had been acquiring awareness through the 1990s of how depleted uranium munitions were being used and not only injuring the people they are aimed at, but also the service men and women who employed them. So that was very much a witness against the use of the depleted uranium which, of course, was used again in this recent war.

AMY GOODMAN: And I was just looking at a picture of you together with the now Timorese President Xanana Gusmao.

CIARON O’REILLY: Yes. I first came to this part of the world from Australia because four women were on trial in Liverpool. They were in jail for disarming a hawk fighter. The British aerospace was selling to the Indonesian military to use against the people of East Timor. Xanana Gusmao, of course, was in prison for six years in Jakarta at that point. And they were acquitted by a Liverpool jury, who resonated with their act of conscience. 2.5 million pounds worth of criminal damage they were charged with. I think that was the first acquittal for a Ploughshares community, so it’s very much part of East Timorese folklore that Ploughshares witness now.

AMY GOODMAN: Well, Ciaron O’Reilly, I want to thank you for joining us during the break in your trial today, the Pitstop Ploughshares. 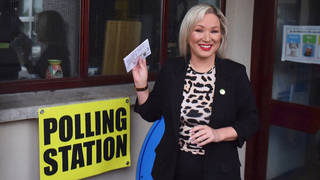