Rep. Bernie Sanders on the Importance of Media Reform As A Political Issue

In this broadcast from the University of Illinois at Urbana-Champaign we hear an excerpt of a speech by Rep. Bernie Sanders, an independent from Vemont. He spoke at the conference “Can Freedom of the Press Survive Media Consolidation?” [includes rush transcript]

Sanders of Vermont spoke on the opening day of the conference Tuesday night. Sanders is the first independent congressman elected to the House of Representatives in 40 years. He recently announced that he will be running for the Senate in the seat that will be vacated by Jim Jeffords in 2006.

This is an excerpt of what he had to say Tuesday night.

AMY GOODMAN: We turn now to Congress member Bernie Sanders, who came here to the University of Illinois for a conference on freedom of the press this week and talked about his own experiences with public broadcasting.

Let me begin by telling you how I first recognized that media was a huge issue. Way back in the 1970s before I became Mayor of Burlington, Vermont, I did a little bit of independent writing. And I did a video, if you like, not quite a film, on the life of Eugene Victor Debs, who some of you know was one of great labor and socialist heroes in America. And I did it because nobody in Vermont, none of the kids, and kids in America today do not know who Debs was, as they do not know the names of many great American heroes. We did the video, and it was not very sophisticated, but it was a fairly — I thought it was a fairly good video, done for a few thousand dollars. And we took it to our local public television station. And we said, “Here is a video, and we would like you to run it.” And they looked at it. One month went by, two months went by, and three months went by, and then they finally wrote back and said, “Sorry, Mr. Sanders, we cannot use your video, because it doesn’t tell both sides of the story.” Because as you know, on all programming that you see on public television, you always hear the socialist and capitalist point of view, the progressive and conservative. That’s the way it is. So they couldn’t put it on. Well, that got me a little bit upset.

And it turned out that in Vermont there were other people who were not necessarily political, but they were local filmmakers, Vermont filmmakers, and they were unable to get their films on Vermont public television. The result of that is we started a little bit of a movement, and we put pressure on our local public television station. And the outcome of it was one of the great nights of my life that I will never forget. The University of Vermont, which owned the public television station agreed to negotiate with us, and we worked out a town meeting of the air on prime time, three hours, prime time Vermont public television, to discuss what should public television in Vermont be. So, we had about 15 people from the establishment, who thought the status quo was good, and we brought 15 people who wanted change. And the guy who was moderating it opened up the phone lines. And this is the truth: so many phone calls came in that the phone line to that station in Winooski, Vermont actually broke down.

So, I got the clue that media was an important issue, and as Bob mentioned, I think our office held the very first town meeting on corporate control over the media a number of years ago. Jeff Cohen, who is one of the founders of FAIR, came to Vermont, and Bob McChesney and John Nichols have been up. We held a meeting with Michael Copps, who on media consolidation has been doing an outstanding job as a member of the FCC. We had 600 people coming out to St. Michael’s College to discuss that issue. So anyone who tells you that media is not an important issue is missing the boat completely. It is enormously important, and the people of America want serious discussion and resolution on the issue.

Now, let me tell you why the perspective that I can bring in with a very distinguished panel is that of a politician, an elected official, who tries to use his office to educate and organize, as well as to pass legislation and do the things the members of Congress do. And let me tell you some of the concerns that I have with what’s going on in the media today. Am I concerned that when I am asked to speak about an issue like Iraq, I get six seconds to respond? Yep. I’m concerned. Because I can’t, and you can’t, and our panelists can’t, and nobody can discuss an issue intelligently in a six-second sound bite, which is what dominates television, which is the most important medium in our country. Am I concerned that, by definition, corporately-owned media is pro-corporate? Yeah, I am very concerned about that. We see the manifestations of that all over the place. We saw the difference between how the corporate media treated a moderate Democrat like Bill Clinton, as opposed to a conservative Republican like George Bush. We saw how they covered the lead up and the war in Iraq so that millions of Americans, in order to get unbiased news, had to go to the CBC in Canada or the BBC. Am I concerned about that? I sure am. Am I concerned that the media seems to think that one of the major issues facing civilization today is the Michael Jackson case? Or maybe — break it to you: Britney Spears is pregnant! It’s true. And we’ll have many months of discussion about that or the local trials or the horrible crimes. Am I concerned about that? I sure am.

AMY GOODMAN: You have been listening to Bernie Sanders, Independent Congress member from Vermont, speaking at the Freedom of the Press Conference that has taken place this week at the University of Illinois, Urbana-Champaign. 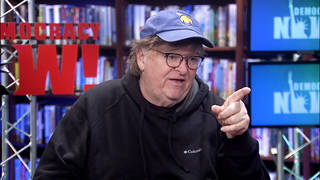