JUAN GONZALEZ: In Haiti, more than a thousand people marched through the streets of Port-au-Prince Thursday to protest the presence of U.N. forces in the country and to call for the return to power of the democratically elected former president, Jean-Bertrand Aristide. Aristide lives in exile in South Africa after his ouster in a U.S.-backed coup nearly three years ago.

Thursday’s march followed the deaths of as many as 17 civilians who were shot by U.N. troops in the capital city’s impoverished Cité Soleil neighborhood last week. Demonstrators expressed outrage at what witnesses called indiscriminate firing by U.N. forces. Many suggested that the U.N.’s intention was to suppress popular support of Aristide and his Lavalas political party.

AMY GOODMAN: The U.N. has denied charges that it fired indiscriminately, saying it was targeting armed gangs involved in recent kidnappings in the city. Under control of the U.N. force, Cité Soleil has been plagued by kidnappings and crime.

Well, to discuss the situation, we’re joined by Lovinsky Pierre-Antoine and Kim Ives. Lovinsky is a Haitian human rights activist, head of the September 30th Foundation, an advocacy group for coup d’état victims. Kim Ives is an independent journalist who specializes in Haiti, and he’ll also be translating for Lovinsky.

We thank you both for joining us. Lovinsky Pierre-Antoine, what happened? Were you in Haiti at the time, or were you here when this happened last week?

LOVINSKY PIERRE-ANTOINE: Yes, I was in Haiti.

AMY GOODMAN: You were in Haiti.

AMY GOODMAN: Tell us what happened.

LOVINSKY PIERRE-ANTOINE: So, I’m going to speak in Creole, and—yes. [translated] What happened in Haiti is a continuation of a war of genocide against the poor population. And that is an expression, in fact, of the class struggle in Haiti. What happened is that the United Nations, by what is called the MINUSTAH (United Nations Stabilization Mission in Haiti), is an accomplice of this war against the poor in Haiti. We can see what happened in Cité Soleil on the 6th of July of 2005, what happens every day in Cité Soleil, where the soldiers kill the poor for nothing, in what happened this past 21st, 22nd of December of this year. This campaign against the poor in Haiti, where they give them some kind of pejorative name, the way that United Nations soldiers are trying to resolve the insecurity problem in the country, even if this is a real problem, the way they resolve it is not appropriate.

JUAN GONZALEZ: You know, I’d like to ask—in all my years as a journalist, in terms of seeing how the United Nations operates in peacekeeping missions, I’ve never seen such periodic reports of the U.N. troops involved in aggressive, violent actions against populations as there has been in Haiti over the last few years. Do you—any sense of, on your part, why the U.N. is playing such a role in Haiti, so different from what it’s done around the world?

LOVINSKY PIERRE-ANTOINE: [translated] The problem is, the United Nations is supposed to maintain peace, it’s supposed to be a force of stabilization, but in fact the presence of the United Nations forces is just an expression of the continuation of the 2004 coup d’état, because all the people who were doing crimes at the end of 2003, like Guy Philippe and all the former military, they don’t have any problem. They’re just circulating freely in the country. But the people who are victims today of the United Nations forces are compatriots who are in Cité Soleil and the other popular quarters who stood up to Guy Philippe. The MINUSTAH cannot play the role of peacekeeper because they’re not neutral.

LOVINSKY PIERRE-ANTOINE: [translated] And we feel in the situation there’s too much influence from the U.S. Embassy and the special representative of the United Nations, Edmond Mulet. And to our mind, the United Nations represents an occupation force, which is pursuing repression against the population and weakening the institutions of state, such as the police and justice, instead of reinforcing them, and putting the country under tutelage.

AMY GOODMAN: The BBC just did an exposé on the rape and abuse of kids in Haiti by the U.N. forces. Before that, we did the Wayne State University report on the massive number of rapes in Haiti and the—specifically also looking at U.N. forces. Now the U.N. forces say they went into Cité Soleil in this last shooting because of the gangs there and the kidnappings. Your response, Lovinsky Pierre-Antoine?

LOVINSKY PIERRE-ANTOINE: [translated] It is not that they were looking to look for gangs in Cité Soleil doing kidnappings. The phenomenon of security and kidnapping in the country is a purely political phenomenon. One of the last acts of kidnapping in the country was a guy called—was a senator called Andris Riché, and this was a complete piece of theater. And they did this precisely so that they could target Cité Soleil, to give the impression that they were trying to fight against insecurity. But in other areas where there’s insecurities, such as in Carrefour Feuilles, where you have the Little Machete Army, neither the national police or the MINUSTAH soldiers did anything to stop that.

JUAN GONZALEZ: Can’t the—what power does the legally elected government of Haiti have now to—can’t they just request that the U.N. troops leave? Why haven’t they?

LOVINSKY PIERRE-ANTOINE: [translated] Presently there’s a campaign that we’ve undertaken, which will go between the 1st and 15th of February to demand that the Security Council remove the U.N. troops from Haiti. And where the Haitian government has not taken its responsibility to stop the genocide in Haiti, so we in the population, in the democratic sector, have taken our responsibility.

AMY GOODMAN: I’m looking at the press release from the United Nations, and they say they’re working with the security forces of Haiti. And in their press release that was released last Friday after the killings in Cité Soleil, they say the operations have resulted in the arrest of 24 kidnap suspects and the liberation of six victims. A number of weapons were also seized. Final comment?

LOVINSKY PIERRE-ANTOINE: [translated] This last killing that was done in Cité Soleil, the people who died were not people with guns in their hands. There were pregnant women and children among them. According to journalists on the ground, there were between 30 and 40 people who died. But we think it’s between 60 and 80 people who died, because the people, when they run, they take the people who fell to run with them.

AMY GOODMAN: Well, I want to thank you very much for being with us. Lovinsky Pierre-Antoine, a Haitian human rights activist, head of the September 30th Foundation, just came up from Haiti. And Kim Ives, thanks very much for joining us. That does it for today’s broadcast, the last of the year. 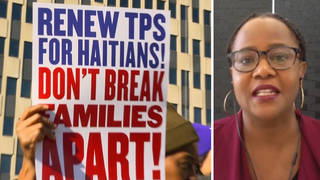