A Sampling of Arab TV Coverage of the Middle East Crisis

We look at how Israel’s bombardment of Lebanon is being covered in the Arab world by turning to MOSAIC, an award-winning program on LinkTV that compiles television news reports from more than 30 television outlets throughout the Middle East. We play an excerpt of MOSAIC’s newscast and speak with Jamal Dajani, director of Middle Eastern Programming at Link TV. [includes rush transcript]

Israel’s bombardment of Lebanon has entered its seventh day and the death toll continues to rise. More than 215 people have been killed–all but 14 of them are civilians. The country’s infrastructure has been devastated and more than 400,000 people have been displaced. Hezbollah continues to fire rockets into Israel. At least 24 Israelis, including 12 civilians, have been killed. Meanwhile, the international community has no plan to stop the bloodshed and there has been little progress on the diplomatic front.

News networks across the United States have been closely following the story over the past week. But how was the news delivered in the Middle East? In the U.S., there’s one place to find out: MOSAIC, a daily show on our partner network, Link TV, that compiles television news reports from more than 30 TV outlets throughout the Middle East. Last year, MOSAIC won one of journalism’s highest honors, the Peabody Award. We play an edited excerpt of the last night’s newscasts from across the Middle East.

AMY GOODMAN: This is an edited excerpt of last night’s newscast from across the Middle East.

MOSAIC: Almost all Lebanese television networks provided wall-to-wall coverage of the war. Future TV gave a summary of the sixth day of the intense bombing of Lebanon.

MOSAIC: Hassan Nasrallah, the Secretary-General of Hezbollah, appeared on all Lebanese television stations, including LBC, a Christian-run network.

HASSAN NASRALLAH, on LBC TV: As long as the enemy aggression has no limits and redlines, our defiance will also have no limits and redlines. The arsenal that you are very concerned about is still available. What was launched so far is only a very small part of this arsenal. We still have the ability to launch more missiles. Today, the Zionists are making all their calculations on the premise that Hezbollah’s missiles will only reach Haifa, Akka and Tigris. We could launch tens of missiles to distance further from Haifa. If you want to fight your battle on the basis of this assumption, then I want to let you know that you will be defeated, God willing.

MOSAIC: Another Lebanese network, NBN, showed hours of photo footage of the carnage of the war. This report titled “The Massacre of Marwahiya” was shown several times, accompanied only by sound of music.

IBA, the Israeli official state television, focused on the damage caused by a barrage of Hezbollah rockets which hit Haifa.

LEAH ZINDER: Yes, Laura, I join you now from a site of devastation, where a three-story house collapsed here in a suburb of Haifa. The day began very quietly. A night and a morning of complete quiet was shattered at a quarter to 2:00 this afternoon when sirens start going off, followed by an onslaught of rockets. No fewer than 50 rockets landed here in Haifa and in the north of the country. Fortunately, in most of those attacks, there were no injuries. But as you see right behind me — I believe you’re looking at it now — this three-story building collapsed. Now, one person was seriously injured in that incident, three others moderately injured. Miraculously, nobody was killed.

MOSAIC: Meanwhile, Nile TV out of Egypt, aside from the coverage of the conflict, focused on the Egyptian public opinion.

EGYPTIAN MAN 2, on NILE TV: Should the Israeli soldier who was captured by the Palestinians be treated in a respectful and honorable way, while the Palestinian and Lebanese prisoners of war that are in Israel prisons are not? Aren’t they humans? Do they not have legal rights and dignity?

AMY GOODMAN: News reports from around the Middle East, an excerpt of MOSAIC: World News from the Middle East. We’re joined now by Jamal Dajani, the director of Middle Eastern programming at Link TV, that produces MOSAIC. Welcome to Democracy Now!, Jamal.

JAMAL DAJANI: Thank you for having me, Amy.

AMY GOODMAN: It’s good to have you with us. Can you talk about this coverage?

JAMAL DAJANI: Well, you know, there is a unique coverage that’s going on now, because there is a split in the perspectives, even within the Arab world and the Lebanese television stations. Since the beginning of the war, with the statements issued by Saudi Arabia condemning Hezbollah, in essence, or pointing the finger at Hezbollah, had created a split, debate, an opinion going on between different broadcasters. For example, some of the Lebanese networks — we have been showing footage from four different Lebanese networks — and some has been critical of Hezbollah, and that has created a lot of debate on the air. So that’s a very unique situation here.

Also, we have the situation where we have another ongoing war now in Iraq. As your news report mentioned, in Kufa, 39 people died today. This hardly made any news in the Arab world, which is really unusual, where you have wall-to-wall coverage on Al Jazeera and Al Arabiya and other broadcasters about what’s going on in Lebanon, and you don’t have — or you have very little about Iraq.

Meanwhile, some of the Arab networks that are aligned with that position, the Saudi position, in the Gulf, they have been having business as usual. I mean, they have not been covering the war in the same manner that — which happened during the Iraqi war, when all the networks were coming with quick updates and showing you immediate reports about the attacks. I mean, we have an ongoing war; this is not just an incursion. And you have probably 60% of the Arab networks showing soap operas, showing game shows, music, songs, and while only the Lebanese are left alone. Only the Lebanese are offering you wall-to-wall coverage, plus Al Jazeera, Al Arabiya and the rest. This is unprecedented.

Also, you know, just to — you know, one of the reports that we showed was from Nile TV, and it was talking about — I mean, showing you the perspective of the people on the street in Egypt. And this is in contrast of the Egyptian position, of the position of Hosni Mubarak, coming — you know, critical about Hezbollah, but we have been seeing the Arab masses speaking against the Israeli incursion there, speaking against their own governments. They had, yesterday, marches in the streets in Kuwait, so a lot of things are going on.

All sorts of unique coverage also from different angles. The Western media is now also present in Beirut. This is a difference that when we had war on Iraq, where the Western media did not come into Baghdad ’til the American soldiers were there. The Israeli media has been recently censored — the past 24 hours, Israel authority has been censoring coverage on the attacks in the north, and more specifically on Al Jazeera. They have prevented Al Jazeera from covering the sites where Hezbollah has been hitting and attacking in Haifa and other areas.

AMY GOODMAN: Jamal Dajani, I wanted to ask you about this issue of censorship. On CNN yesterday, host Kyra Phillips was interviewing Steve Hartov, a former soldier in the Israeli army, who’s now a military analyst. I wanted to play an excerpt of that interview and then ask for your comment. This is CNN’s anchor, Kyra Phillips.

KYRA PHILLIPS: I want to ask you about the Israeli Defense Force stepping in and asking the media to stop showing certain images in the area. We have struck a deal that it’s a war-sensitive time. There have to be certain censorship issues. Tell me why the IDF is asking us to back off on certain specific pictures.

STEVEN HARTOV: Well, Kyra, it’s difficult for Western viewers sometimes to understand the aspects of what we might call here censorship. But, in fact, if you’ve got a camera, for instance, in Haifa, and you report that a rocket has fallen in a particular neighborhood, you become a forward observer for the enemy.

JAMAL DAJANI: Well, I mean, Hezbollah has been hitting Haifa. I think you have an entire coverage, a one-sided coverage of the war. You have cameras all over Lebanon, all over Beirut. You know, we are getting information there uninterrupted, uncensored, and then after — you know, they started in the initial phase, when the Israelis were surprised, themselves, with the capabilities of Hezbollah, that Hezbollah was able to strike into Haifa. They started censoring first Al Jazeera. I know the other networks, like Israeli Broadcast Authority and Western Media, were allowed to film those areas, were allowed to interview the people.

And then all the sudden this happened just within the past 24 hours. They decided, and I think, you know, they decided after they heard Nasrallah talking about that everything now is game, you know, for the attack. But I think, you know, if Hezbollah was prepared to attack Haifa, they already know where are the chemical plants, and they already know — they have probably operatives on the ground. I mean, it’s a whole — I mean, these days, you know almost everything from Google video.

AMY GOODMAN: How much is the media in different Arab countries, like Saudi Arabia, watched, as opposed to satellite television, the networks like Al Jazeera?

JAMAL DAJANI: Well, I mean, throughout the world, you have access to more than 200 different satellite networks, so although the Saudis are also practicing censorship, because the Saudis, you know, they have their own take on the war and they have not been showing really the devastation that has been shown on Al Jazeera, on Al Arabiya, on LBC, on NBN, but I think the average Saudi citizen can access all these networks. I don’t think the people in the area are shielded from the horrifying images of the war, but I think from the Israeli side, there is definite censorship in showing the extent of the damage or what cities have been hit or the injured people.

AMY GOODMAN: Jamal Dajani, I want to thank you very much for being with us, director of Middle East programming at Link TV, and producer of MOSAIC: World News from the Middle East. Link TV is on both TV satellite networks in this country, on DISH Network, channel 9410, and on DIRECTV, channel 375, where Democracy Now! broadcasts, as well. Thanks so much for joining us from San Francisco. 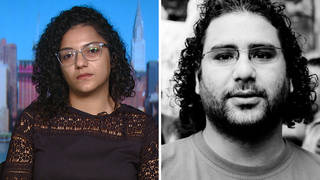