One Bright Shining Moment: The Forgotten Summer of George McGovern

Former Senator George McGovern turns 84 years-old today. Ridiculed by the press and scorned by his colleagues, the 1972 presidential candidate stood alone on the senate floor calling for an end to the Vietnam War. We play an excerpt of the documentary, “One Bright Shining Moment: The Forgotten Summer of George McGovern.” [includes rush transcript]

Today is the birthday of former South Dakota senator George McGovern. He turns eighty-four. He was the first senator to go to the Senate floor and demand an immediate end to the Vietnam War.

This is an excerpt of a documentary about his life called “One Bright Shining Moment: The Forgotten Summer of George McGovern” produced by Stephen Vittoria. It features Howard Zinn, Vietnam vet Ron Kovic, Gore Vidal, Gloria Steinem, Dick Gregory, baseball player Jim Bouton and, of course, George McGovern himself.

AMY GOODMAN: This is an excerpt of a documentary about his life called One Bright Shining Moment: The Forgotten Summer of George McGovern, produced by Steve Vittoria. I narrated this documentary.

GEORGE McGOVERN: It doesn’t do much good to bomb a rice field or to drop bombs on a primitive agricultural country like Vietnam. We haven’t protected our men in the South with the bombing. This is the biggest fraud ever perpetrated on the American people. We haven’t saved the lives of American troops in the South by bombing the North.

RON KOVIC: If I died in Vietnam, I would die serving the country that I loved. And I think that millions of young men who went to that war felt that way. And we believed them. We trusted them. We had faith in what they said we had to do was the right thing. And we went to that war, believing in our hearts that we were right and that our government would never lie to us.

U.S. SOLDIER: They took all your dignity and all your sensitivity and just inexorably grind it out of you, strip it off of you, and they make you into a little zombie.

GORE VIDAL: They used to say, “Contain China.” Well, I said, “Alright, if you want to contain China, why are you hitting the Vietnamese, who have been China’s enemy for a thousand years?” But, you see, that’s history, and the United States of Amnesia does not admit that there has ever been history or anything happening before Monday morning’s New York Times, which is apt not to be historical.

GLORIA STEINEM: And when the Vietnam War started, I found myself really feeling estranged, because I thought not only should we not be there, but if we’re there, we should be on the other side.

GORE VIDAL: So they couldn’t think of a reason. They were containing China. They got tired of that one. And then I realized it was a war of imperial vanity. At least we are thieves in Iraq.

GLORIA STEINEM: It’s really alienating to feel that your country is at war, and you think the other side has more merit.

GORE VIDAL: The Lyndon Johnson people were pissant fools, to use his colorful language. They were just fools. “How dare anybody stand up to us?”

DICK GREGORY: Take the camera out of Vietnam, it’s just another war. There’s something coming in my house, and these guys all look like John Wayne, and they’re hollering and screaming. And you hear folk cussing, man. “Get that motherf***ing helicopter over here!” You never heard this before.

JIM BOUTON: I was a baseball player, so we got to war about three years late. I was called a communist. I was known as the communist on the team, on the baseball team.

DICK GREGORY: And then they made the mistake to sit and look at it with their children. Little children looking at Vietnam don’t understand bad guy/good guy. They was looking, seeing people being killed. This was in your living room!

JIM BOUTON: On a baseball team anybody who gets caught reading a book or having an opinion in politics was a weirdo. So I was considered a weirdo.

DICK GREGORY: See, America had always had a nigger with us and would kick us, and we’d say, “Oh, boss, did I do something wrong? Excuse me, boss.” Then you went over there, thought it was a nigger. And he kicked at him, and that Vietnamese grabbed his foot. Now, he had never had his foot grabbed before in the history of America. And he ran across some niggers that wasn’t scared of him.

AMY GOODMAN: In January of '69, Nixon and Kissinger told William Fulbright, the chairman of the Senate Foreign Relations Committee, “Just give us a year to end the war.” And, of course, the Democrats obliged. What's another year when it’s not your kids’ blood? American casualties continued, as high as 2,000 a week, with Nixon’s bombing campaign intensifying to new levels. Deploring the killing, McGovern hit the Senate floor calling for an immediate end to the war. Not one United States senator joined him. He was ridiculed on Capitol Hill and scorched by the press. During the '68 campaign, Nixon promised that he would unveil his secret plan to end the war. To this day, Nixon's secret plan has remained a secret.

RICHARD NIXON: The greatest honor history can bestow is the title of peacemaker. This honor now beckons America.

FRANK MANKIEWICZ: There are a lot of Americans who were not offended by the idea that we’re at war and killing a lot of natives. There were still a lot of people who felt, “Yeah, that’s a pretty good thing. Let’s go get those gooks.”

RICHARD NIXON: There has been and continues to be opposition the war in Vietnam on the campuses and also in the nation. As far as this kind of activity is concerned, we expect it. However, under no circumstances will I be affected whatever by it.

AMY GOODMAN: McGovern made a number of trips to Vietnam to see the battlefields firsthand, the jungles that were claiming so many lives. His first trip was in 1965.

GEORGE McGOVERN: I went to a hospital of American soldiers in Saigon. The very first person I talked to was a captain. And the nurse who was taking me around said the captain got the Silver Star and the Purple Heart. I said, “Well, congratulations, Captain.” And as I did so, his lip started to quiver. And I looked down on the bed, and his feet were gone. He had stepped on a mine and blown off his feet about six inches above the ankles. And I visited with him for a while. And I said, “Well, congratulations, again, Captain, on the Purple Heart this morning.” He said, “That’s easy to get in this damn place.”

I went into a civilian hospital, where the Vietnamese were being cared for. They were the victims of shrapnel from American gunfire. One woman had a baby that she was holding. The baby’s head was completely wrapped in bandages, except for the eyes. And I asked her if she would mind if I took a picture of her and the baby. She picked up an old rag to wipe some of the blood off the bandages on the baby’s face and then tried to smile widely. And I took that picture, which I still have. 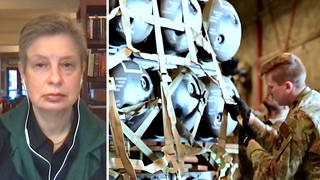