Federal Communications Commission Chairman Kevin Martin has refused to delay a vote on his proposed changes to rewrite media ownership laws. The vote is set for Tuesday. We speak with Craig Aaron of Free Press, a national media reform organization. [includes rush transcript]

We end up on the Federal Communications Commission. Its chair, Kevin Martin, has refused to delay a vote on his proposed changes to media ownership laws. Martin would increase media consolidation by relaxing the rules for companies seeking to own both a newspaper and television or radio station in the same city. The vote is set for Tuesday.


The FCC Chair says he has suggested a “relatively minor loosening of the ban on newspaper/broadcast cross-ownership.” But there has been a groundswell of public opposition to his proposal. Last Tuesday, the Senate Commerce Committee unanimously voted to block the FCC’s December 18th vote.


But two days later, Martin insisted on moving forward with the vote during a heated exchange with Senator John Kerry at the Committee’s oversight hearing.

Good morning, Amy. Thanks for having me on.

Craig, what do you expect to happen tomorrow?

Well, I’ll say there’s a lot that could happen in the next twenty-four hours. All indications are that Kevin Martin is going to be defiant, ignore the millions and millions of Americans who have contacted the FCC and Congress since 2003 opposing any rule changes that would lead to more media consolidation, going against the wishes of the Senate, which, as you said, a couple of weeks ago passed a bill out of committee, the Media Ownership Act of 2007, that would force a fair process, some accountability. Martin appears to be heading down the road to a vote. However, a lot can happen in twenty-four hours. The last time the FCC met, they didn’t start their meeting ’til nearly 11:00 p.m. at night, so there are negotiations going on, but Martin appears to be, again, going against the popular will, going against what the public wants, to give a big giveaway to a small handful of the biggest media companies.

The previous chair, Michael Powell, son of Colin Powell, was fiercely rebuked by people across the political spectrum for trying to increase media consolidation. Ultimately, he left and talked about the power he did not expect of the people responding. Why is Kevin Martin, the current chair, doing this?


They’re also hoping to push forward, really, before that same kind of public opposition can come together again. You know, nearly three million people contacted the FCC and Congress in 2003, like you say, from across the political spectrum. Commissioner Michael Copps likes to joke that he doesn’t — didn’t know that three million people new what he FCC was. So we saw this incredible groundswell of public opposition. It’s beginning to stir again. We have hundreds of thousands of comments filed at the FCC, tens of thousands of calls going into Congress. And I think Kevin Martin is trying to rush through these rules by the end of the year, before even more people find out what he’s up to.

Craig Aaron, who benefits from the media ownership rules changes?

Well, the companies that really want to see this change are companies that already own TV stations and newspapers in different markets. So it’s companies like the Tribune Company, Rupert Murdoch News Corp., Gannett. They’re the ones who have been calling for this change for a long time. They are the ones who own stations and newspapers in these markets, the top twenty markets that Martin has laid out. But the fact is that all of these big media companies would benefit, because there are giant loopholes in Martin’s proposal that would allow more concentration, more consolidation in hundreds and hundreds of markets across the country.


So it is a small handful of media giants that are going to benefit at the expense of the few remaining independent voices in the local news market, at the expense of the few women and minority owners, who tend to own a smaller number of stations or single stations, who are going to be targeted if this rule is pushed through with these giant loopholes.

Now, last time the rule was pushed through, but then it was fought back, and you had groups like Prometheus in Philadelphia actually stopping the implementation of the rule changes through lawsuit. What about here? What happens after tomorrow?

Well, the fight is far from over, even if the FCC does vote these rules. The last time they tried to pass these, the Senate did actually vote what’s called a resolution of disapproval. It’s a rarely used Senate veto — or a congressional veto. It actually passed the Senate, did not pass the House, but came very close in 2003, before these rules, including this cross-ownership rule, were thrown out by the courts.

So, whatever Kevin Martin does tomorrow at the FCC, it is very likely that you will see action from Congress. In fact, that’s why we’re urging people to contact their senators today, trying to put in 100,000 call to the Senate today, and go to stopbigmedia.com to find out all the information.

If he passes these rules, there is no question that there will be lawsuits. It will go to court. It’s very likely that you could see both public interest groups taking action, as well as the industry, which doesn’t think, in some ways, these rules go far enough. They’re also threatening to sue. So it’s very likely that this will head back to the courts. And, in fact, the appeals court that threw out these rules last time in the Prometheus case would have to review any decision.

CRAIG AARON: And we’ve been collecting — sure, Amy.

Thanks very much for joining us. We have to leave it there. The end of the show is upon us. Craig Aaron of Free Press. 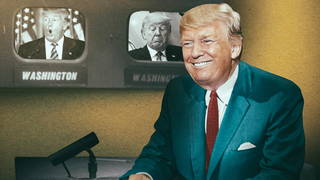