StoryOct 14, 2014James Risen Prepared to “Pay Any Price” to Report on War on Terror Amid Crackdown on Whistleblowers

AMY GOODMAN: Martin Garbus, in addition to being one of the leading First Amendment attorneys in this country, you have also written a book called The Next 25 Years: The New Supreme Court and What It Means for Americans. Can you put this struggle in context?

MARTIN GARBUS: Well, I think that, with respect to what was just said, I think what you saw in the Libby trial is the relationship between the present press and the government. And what you find — and Judith Miller is an example of it — and again, there was a story in today’s paper, where you saw an example of it — is too often the Times takes stories that the government gives out, which are not based on sufficient information, and use those as headline stories to, in a way, aid or contribute to a war mentality. They are now doing it with respect to Iraq.

MARTIN GARBUS: Iran, pardon me, and the front-page story today in The New York Times —

MARTIN GARBUS: — with Michael Gordon, again, is an unsourced story where nobody will talk to it, and the Times puts it right up front.

AMY GOODMAN: And Michael Gordon, of course, wrote some of those stories with Judith Miller in the lead-up to the invasion, alleging weapons of mass destruction.

MARTIN GARBUS: Yes, and the question is, why doesn’t the Times learn? In other words, now they’re supposed to have an ombudsman who checks into what they’re doing. It’s amazing to see the same thing happen again. And without saying that the Times drove us to war, which would be nonsense, the _Times_’s early editorial position was that we should go to war, and the _Times_’s early editorial position was based on the information that Judith Miller and others were putting on the front page of the Times.

So today, especially, very much of what’s being said is appropriate, that the relationship between the media, where too often they act as a part of the propaganda machine for the government is the kind of stuff that’s going to get us all into trouble. And it’s clear the administration is escalating to a war with Iran, and the Times is becoming part of that machine.

AMY GOODMAN: Where does the Supreme Court fit into this? What does the next 25 years look like?

AMY GOODMAN: Explain for people, especially young people who listen to and watch this broadcast.

MARTIN GARBUS: OK, Brown v. Board of Education said that if the state segregates a school, then a court can order integration. And the music of that case has been that we should have an integrated school system and that the government can interfere to help make a school system integrated.

AMY GOODMAN: Your first chapter, Martin Garbus, “The President Against the People.” How?

MARTIN GARBUS: I think ultimately what the court is also going to do is they’re going to extend the whole question of the unitary presidency. They’re going to give Bush, or whatever president follows, a great deal of power. Roberts and Alito, again, and Scalia and Thomas believe that the president has sole control over foreign affairs, that the president, as commander-in-chief, gets all kind of powers, and with respect to the past decisions that we’ve had, with Guantanamo, etc., you had O’Connor there, who was basically a ballast, and I think you’re going to find the court making very, very different decisions now with respect to Iraq-related issues.

AMY GOODMAN: And state religion against the people?

MARTIN GARBUS: I think that’s one of the major areas. Bush’s faith-based initiative has resulted in more money going into the churches this year than have gone on in the entire last century. It’s an enormous money flow. I have a case now where we’re challenging it in New York with respect to the Salvation Army. What a faith-based initiative means is that the federal government can pour money into religious organizations, if the religious organizations are doing the kinds of work that a state organization could do. For example, if the —

MARTIN GARBUS: — if the Salvation Army is taking care of children or homeless, then they also are allowed proselytize using federal funds.

AMY GOODMAN: We’re going to have to leave it there. Martin Garbus is author of The Next 25 Years: The New Supreme Court and What It Means for Americans. Raney Aronson is the producer of the Frontline documentary series that begins tomorrow night called “News War.” 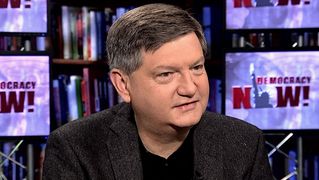