May Day is less than two weeks away. Last year, more than a million and a half immigrant rights supporters turned out for what was considered the largest day of protest in U.S. history. We take a look at the state of the immigrant rights movement and the plans for May Day 2007. [includes rush transcript]

AMY GOODMAN: We’re less than two weeks away from May Day. On that date last year, more than 1.5 million immigrant rights supporters turned out for what was considered the largest day of protest in U.S. history. Many had walked off the job in an action meant to highlight the impact of living without immigrants. Organizers are expecting an even greater turnout this year. Protests and walkouts are planned across the country for what’s being called the Great American Boycott II.

The immigrant rights movement is facing several challenges. President Bush recently vowed to renew his effort to pass immigration reform, while immigrant workers have been subjected to a growing wave of raids and deportations.

Javier Rodriguez is our guest, an organizer with the March 25th Coalition, one of the main groups behind the mass rallies here in Los Angeles last year and for this upcoming May Day, as well. Welcome to Democracy Now!, Javier.

AMY GOODMAN: Can you talk about what you are planning this year?

JAVIER RODRIGUEZ: Well, we have 63 organizations that have convened the second national boycott for May 1: Great American Boycott II. We have at this time approximately 16 states on the list with about 75 cities, the major cities in the country, from L.A. all the way to New York — Texas, Colorado, the state of Washington, the Midwest, Illinois, Wisconsin.

AMY GOODMAN: What do you think has happened in terms of immigrant rights issues since last year?

And the difference now, in terms of us, we’re a lot better organized. We have been able to pretty much consolidate the mass movement. And now, we are at, as you said, almost two weeks towards May 1, and we expect a large turnout, not just on the streets in over 75 cities, but also the boycott.

Last year, just in L.A. alone, we almost closed the whole city down. We had over four million people participating. This time around, we may have the same amount. We may affect the economy the same way, and in the rest of the country.

But also, we have gone over to the other side to organize in Mexico, and there’s major support. In Mexico, we have over a thousand organizations in Mexico in different parts. And we are closing several of the ports of entry from Mexico to the U.S. Last year, just from Juarez and El Paso — from Juarez, over 40,000 workers refused to enter to work to El Paso on May 1. This time around, it will be Brownsville, Reynosa/McAllen border, and also Juarez again, and hopefully we will have Tijuana.

In addition to Mexico, we also have Venezuela expressing a big, big movement of solidarity with the May 1 movement here for immigration reform, for the 12 million to 13 million people here.

Over 600,000 women with over 3.3 million children that are U.S. citizens, that’s what the struggle is about today.

AMY GOODMAN: What difference has it made that Democrats are now in power in Congress?

JAVIER RODRIGUEZ: Very little, at this time. Very little. Yes, last year the Congress was controlled by the extreme right. We were able to participate in the overall electorate that defeated, especially the antiwar sentiment. And now, we have, let’s say — the first proposal came from the Democrats, the Gutierrez-Flake bill, but it’s essentially corporate-designed. It is designed to make a worker who has been here seven years, 14 years, even up to 38 years, which is my mechanic — the project — the proposal calls for a wait of approximately 14 years to be able to get your green card, besides having a guest worker program, besides having a totally enforcement, let’s say, section very similar to the Sensenbrenner bill.

AMY GOODMAN: When President Bush announced his so-called guest worker plan, it was a few days after yet another mass rally at the beginning of April of tens of thousands of people here in Los Angeles. Among the things in Bush’s plan is to create a new visa category for undocumented workers who could apply for renewable three-year work permits for $3,500. Then, in order to become legal residents, they would have to return to their home countries, apply and pay a $10,000 fine. The proposal also prohibits temporary workers from bringing their families into the country. Your response?

JAVIER RODRIGUEZ: My response: It’s absurd, it’s ridiculous. Now, let’s say, the $13,500 would pay for the coyote, for the drug smuggler, five times. It is — let’s say it is an insult. And what we see is President Bush pushing for an immigration reform that is, what we think, designed to counterweight, water down any efforts by the Democrats to approve any immigration reform, any future immigration reform, either this year or the following year.

AMY GOODMAN: The significance of immigrants fighting in Army being sent to Iraq?

JAVIER RODRIGUEZ: Let’s say, it’s a shame. It is making criminals, murderers, mercenaries out of immigrants in exchange for a green card. And it is making — what is it? — an estimated 40,000 immigrants, human beings, that it’s going after human beings in another country in a war that should not be a war, that it’s totally a war of occupation of, let’s say, with politically designed rationale, as it is known now. It was totally fabricated. So if immigrants are going with a sense of patriotism, with a sense of getting in exchange their green card, or rather citizenship, it is totally wrong.

AMY GOODMAN: What about these detention facilities around the country? I think now a record of more than 26,000 immigrants currently in prison in the United States. We have been doing a big story out of Taylor, Texas, the Don Hutto Family Detention Center there, where immigrants are held, about 200 children. I think the ACLU has brought suit. You’ve also got the prisons at Raymondville, the largest prison camp in the United States. Can you talk about these?

JAVIER RODRIGUEZ: It is what we consider now the immigration-industrial complex. Prisons are on the — let’s say are on the vision of government and also industry, the enterprise. And along with the wall, it is nothing but a money-making scheme, the building of prisons, the building of detention centers. And it is totally also in violation of human rights to imprison children in this country, immigrant children, just for so the-called crime of crossing into the United States, just as adults.

AMY GOODMAN: How, finally, are you organizing in your plans for May? What are the different organizations?

JAVIER RODRIGUEZ: Let’s say one of them: the International Longshoremen Workers Union, or West Coast union. They have passed a resolution to close down the ports on May 1. The whole West Coast is going to be closed. The trucking industry, those that pull the cargo, also are with us. United Teachers of Los Angeles are with us. The major coalitions in the country that closed down the cities last year, San Antonio, the Border Social Forum, a New York May 1 Coalition and others.

AMY GOODMAN: Javier Rodriguez, we’re going to have to leave it there. I want to thank you very much for joining us. 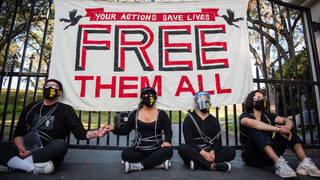